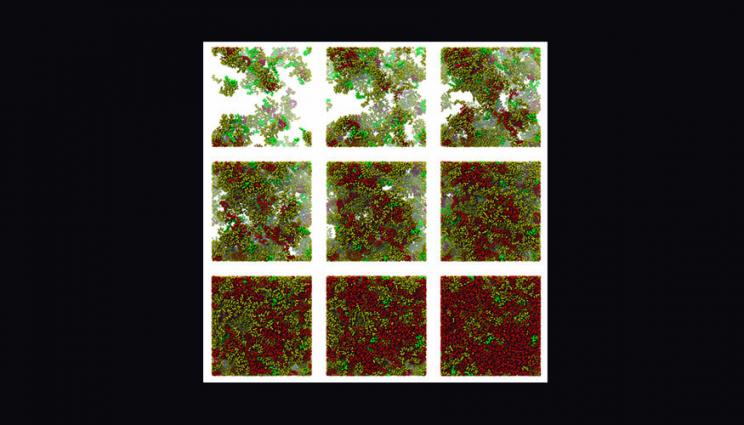 LLNL researchers used molecular dynamics (MD) simulations to study the polymerization of three different molecules from the same reactive group (acrylate) but containing different nonreactive components. Shown are “snapshots” from an MD simulation of a liquid monomer as it polymerizes and gradually becomes a solid, revealing the emergence of a highly cross-linked network from monomers with two acrylate functional groups. Image by John Karne

The team used molecular dynamics simulations to study, at a microscopic level, the kinetics and topology of three different molecules from the same reactive group (acrylate) but containing different nonreactive components. The researchers found that differences in the dynamics and structure of the resulting cross-linked polymers, built using the TPL and VAM processes, were a result of differences in the nonreactive parts of the molecules. The research appears in the Oct. 15 issue of The Journal of Physical Chemistry B and is featured online as a supplementary cover.

Researchers said the insights gained from the study open the door to rationally designed photoresists and will aid them in their quest to design new custom photosensitive resins capable of pushing the boundaries of TPL and LLNL-developed VAM. These techniques generate 3D objects by projecting patterned light into liquid resins, causing them to harden at desired points within seconds. The resins used in these processes often contain different molecules with the same reactive functional groups, and their formulation relies on trial and error methods, with the results treated as trade secrets.

“Our combination of molecular dynamics simulations and mathematical graph theory allows us to modify or perturb the chemistry and physics of molecules that serve as the building blocks in AM techniques like TPL and VAM and see the impact on the resulting polymer,” explained John Karnes, the paper’s lead author. “Since we can see every atom in these simulations, we’re starting to develop intuition that bridges the gap between microscopic network topology and macroscopic behavior, like understanding the relationship between intramolecular loops or cycles, and the point at which the liquid resin gels to form the solid printed part.”

LLNL material scientist Juergen Biener said the team is continuing the work by exploring longer length and time scales, simulating mechanical testing of printed parts and modeling other types of polymerization of interest to LLNL.