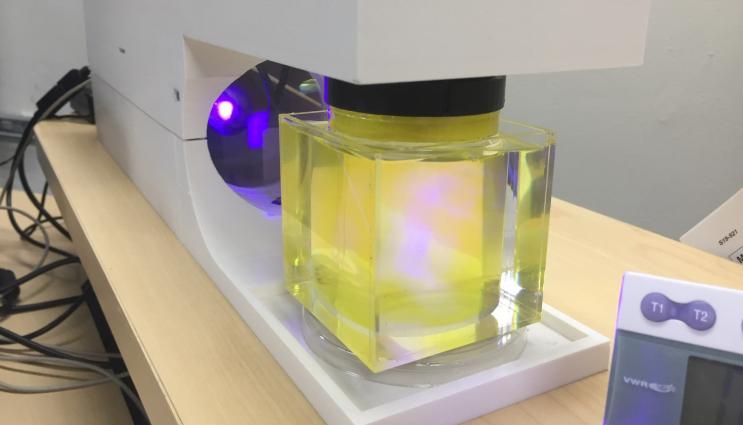 Taking inspiration from computed tomography, the Computed Axial Lithography (CAL) 3D printing method uses projected photons to illuminate a syrup-like resin, creating a continuously shifting video of projections as the vial rotates. Like a CT scan done in reverse, the projections combine to form a 3D object that is suspended in the resin. Here, a CAL system projects light into a photosensitive resin to produce a component. Photo by Hossein Heidari/UC Berkeley

It looks like something you might find aboard the Starship Enterprise. A projector beams a three-dimensional video into a container of photosensitive resin. The video plays while the container rotates for a few minutes — then the fluid drains, leaving behind a complete, fully formed 3D object.

Though it seems like science fiction, it’s not, thanks to scientists and engineers at Lawrence Livermore National Laboratory (LLNL) and the University of California, Berkeley (UC Berkeley), who have developed a new high-speed 3D printing method called Computed Axial Lithography (CAL). The method is described online in the Jan. 31 edition of the journal Science.

"This is a breakthrough in the space of possible methods to do additive manufacturing," said LLNL engineer Maxim Shusteff, a co-author on the paper. "What this approach does is make it possible for interesting polymer parts to be made much more quickly, which is often a bottleneck, and we can now think about using materials that don’t work well with slower layer-by-layer methods."

Like the three-beam laser method the team published previously, CAL creates entire parts at once. However, taking inspiration from computed tomography (where X-rays are fired from different angles to image a 3D volume), CAL uses projected photons to illuminate the syrup-like resin, creating a continuously shifting video of projections as the vial rotates. Like a CT scan done in reverse, the projections combine to form a 3D object that is suspended in the resin. Most builds using CAL take several minutes to complete, many times faster than existing polymer 3D printing techniques, researchers said.

"This method is more powerful than other VAM concepts because it can create more complex structures in a layer-less fashion while using standard projection technology," said Chris Spadaccini, director of LLNL’s Center for Engineered Materials and Manufacturing and co-author on the paper. "It’s layer-less, it produces parts with good surface roughness, it is fast and we believe it to be scalable to much larger sizes."

By using a projector instead of multiple laser beams (which required scientists to account for and adjust each beam) the researchers demonstrated they could shine 1,440 different projections (four beams per degree in 3D space) into the resin as it rotates. This makes the process easier to control than other laser-based volumetric methods, researchers said, and allows for much broader geometric flexibility, such as easily creating curves and smooth surfaces.

The development of the CAL method took two years. In 2016, UC Berkeley grad student and co-lead author Brett Kelly, who worked on the volumetric project at LLNL, and his UC Berkeley professor Hayden Taylor, decided an alternative method was necessary to expand the geometric freedom and print more arbitrary, complex objects. They brainstormed a solution that would borrow computationally from computed tomography to pattern the 3D images. Kelly then met UC Berkeley Ph.D. student Indrasen Bhattacharya at a computational imaging graduate class at UC Berkeley, where they produced the first proof of principle demonstration as a class project.

"Volumetric multibeam printing could make parts quickly, but the major drawback was that it was simple geometries," Taylor said. "The key insight that makes CAL far more geometrically capable is the introduction of rotation in relation to the photosensitive material. The number of degrees of freedom can be increased at will. We had the insight that we could adapt tomographic imaging and turn that on its head to create objects, even some that don’t have any symmetry at all."

The process starts with a Computer-Aided Design (CAD) model. The projection is calculated at each angle, researchers run an optimization algorithm and the result is a series of images that appears as a rotating video projection that can be played at a rate adjusted to the rotation of the resin vial. After several minutes, the 3D structure appears, the researchers stop the exposure and drain the uncured liquid, leaving only the finished product. 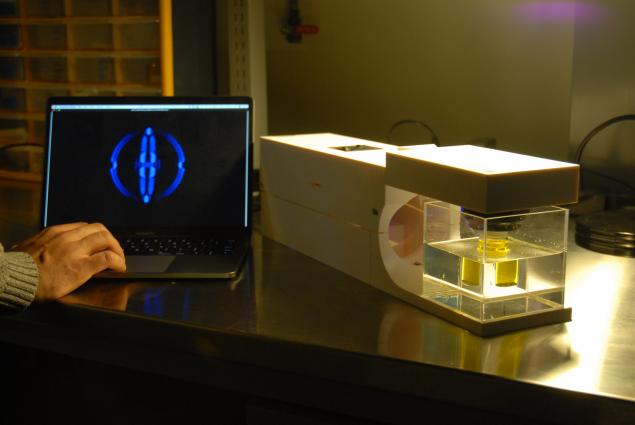 While the hardware required to perform CAL isn’t physically complicated, the software and mathematics behind the process are. The work required researchers to understand how the light interacted with the resin material. Bhattacharya, a co-lead author on the paper, implemented a modified version of the "filtered back-projection" algorithm, which uses constrained optimization to generate a sequence of 2D images with only positive values. The algorithm established the mathematical framework that would distribute the right dosage of light to solidify the resin properly and create the desired object.

"In conventional layered additive manufacturing, the layers that are printed are the same as the layers that go into your design file that tells the printer what to print — what you see is essentially what you get," Bhattacharya said. "However, in this case we are projecting images that travel through the entire volume and when they are all combined, you get a 3D volume that looks like what you need to print. We must, from the very outset, apply computation in order to calculate what the projected images are going to be. There is no printing without the computation."

The first experiments with CAL started in fall 2016. For the first test, the Berkeley group successfully printed a 2D model of the Cal logo, and followed that with simple 3D models of atoms and spheres. Subsequent test parts printed at Berkeley and Livermore included a small airplane model, lattice structures, a disconnected sphere inside of a cage, a lens and a miniaturized version of Rodin’s famous sculpture "The Thinker." The largest object was a model of a human-sized lower jawline, showing that CAL could be capably used to create dental implants.

One of the parts, a screwdriver, is evidence of CAL’s unique capability of "overprinting"— printing a polymer object over an existing object. The concept could someday be used in personalized sports equipment, footwear, clothing and hearing aids, Kelly said. Another part, a bridge structure, showed that researchers could eliminate the need for sacrificial support structures that traditional printing methods require. Many of the parts were generated by UC Berkeley student and co-lead author Hossein Heidari.

"The fact that the object emerges inside the volume of uncured material and is upheld by the buoyancy forces of the surrounding liquid, enables, for the first time truly support-free 3D printing." Heidari said. "Among all other advantages that this brings, we now can print extremely delicate microstructures in soft materials as deformable as the jelly we eat. This can remove many of the fabrication constraints that tissue engineers and the bioprinting community have been facing for a long time."

Heidari said researchers have demonstrated close to zero material waste and 100 percent reusability of the uncured material, another advantage that comes with support-free 3D printing. Kelly said the CAL technique also opens the door to printing with materials like extremely viscous polymer resins that can’t be used with traditional layer-by-layer 3D printing.

"Now, we can take essentially any arbitrary object from a design file and form it as a whole, instead of layer-by-layer," Kelly said. "It is an entirely new process, and we’ve only scratched the surface of what it can enable. I see this as a new category of additive manufacturing technique that can open up a lot of things. I’m excited to see where we and other researchers go with it."

The project was funded through LLNL’s Laboratory Directed Research and Development (LDRD) program and by UC Berkeley faculty startup support. To address any limits on geometries, the team at LLNL is focusing a new LDRD project on exploring more materials, with an emphasis on the chemistry and 3D behavior of the resin. The UC Berkeley team is involved in the LDRD project and is interested in pursuing life science applications, such as soft materials and tissue engineering. Work will continue there in producing structures of much larger volumes, the researchers said.

"This is a great example of how collaboration between people with different backgrounds and expertise can lead to really innovative new technology," Kelly said. "I’m excited about the way this collaborative effort enabled new results that might not have materialized without all these minds working on the problem."

The technology is already generating interest from commercial partners. LLNL’s Shusteff said he’s "energized" about the possibilities of industry adoption, but to demonstrate commercial viability, researchers will have to show the method is sufficiently reliable and geometrically precise. Overall, he sees CAL as a significant advance in 3D printing and a method with a potentially widespread impact.

"We’ve seen a lot of developments, but this suggests that there’s a lot of room still to come up with different approaches," Shusteff said. "I really hope it will be a whole new field because now people can think in this way of making a whole part at once. In this vein, the scientific community will find new ways to shape energy delivery. This is yet another important and new tool in our toolkit and it’s exciting to see where it can go."