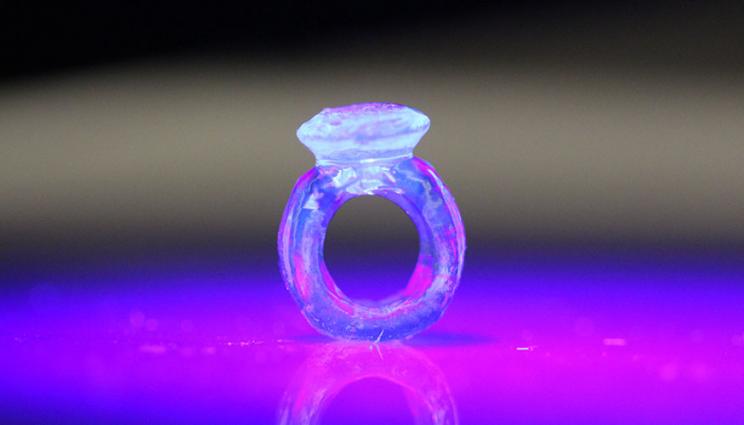 Using a custom volumetric additive manufacturing 3D printer, Lawrence Livermore researchers were able to build tough and strong, as well as stretchable and flexible, objects nearly instantly from a class of materials known as thiol-ene resins. Photo by Maxim Shusteff/LLNL.

The class of materials adapted for volumetric 3D printing are called thiol-ene resins, and they can be used with LLNL’s volumetric additive manufacturing (VAM) techniques, including Computed Axial Lithography (CAL), which produces objects by projecting beams of 3D-patterned light into a vial of resin. The vial spins as the light cures the liquid resin into a solid at the desired points in the volume, and the uncured resin is drained, leaving the 3D object behind in a matter of seconds.

Previously, researchers worked with acrylate‐based resins that produced brittle and easily breakable objects using the CAL process. However, the new resin chemistry, created through the careful balancing of three different types of molecules, is more versatile and provides researchers with a flexible design space and wider range of mechanical performance. With thiol-ene resins, researchers were able to build tough and strong, as well as stretchable and flexible, objects, using a custom VAM printer at LLNL. The work was recently published in the journal Advanced Materials and highlighted in Nature.

“These results are a key step toward our vision of using the VAM paradigm to significantly expand the types of materials that can be used in light-driven 3D printing,” said LLNL engineer Maxim Shusteff, the work’s principal investigator and head of a Laboratory Directed Research & Development project in advanced photopolymer materials development.

In the paper, researchers also demonstrated the first example of a method for designing the 3D energy dose delivered into the resin to predict and measure it, successfully printing 3D structures in the thiol‐ene resin through tomographic volumetric additive manufacturing. The demonstration creates a common reference for controlled 3D fabrication and for comparing resin systems, researchers said.

The team concluded the work represents a “significant advancement” for volumetric additive manufacturing as they work toward their goal of producing high‐performance printed engineering polymers, with particular emphasis on using thiol‐ene materials in biological scaffolds. Thiol‐ene materials have shown promise for applications including adhesives, electronics and as biomaterials, researchers said.

“By implementing a nonlinear threshold response into a broad range of chemistries, we plan to print with resins such as silicones or other materials that impart functionality,” said LLNL materials engineer Caitlyn Cook.

By studying how the resin behaves at different light dosages, researchers added they aim to improve the agreement between computational models and experiments and apply photochemical behavior to the computed tomography reconstructions that produce the 3D models used to build objects.