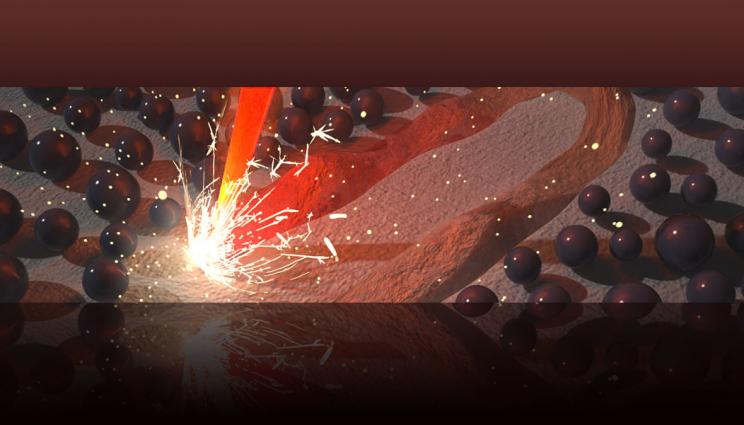 By combining high-performance computer simulations with X-ray imaging of the laser powder-bed fusion metal additive manufacturing process, researchers at Lawrence Livermore National Laboratory and SLAC National Accelerator Laboratory have found a way to negate the formation of pores — tiny holes created under the surface of a build that can initiate cracking in the finished part under stress.

Lawrence Livermore National Laboratory (LLNL) researchers, along with scientists at the SLAC National Accelerator Laboratory (SLAC), have discovered a solution to a major type of defect in metal 3D-printed parts.

Combining high-performance computer simulations with X-ray imaging of the laser powder-bed fusion (LBPF) metal additive manufacturing process obtained with SLAC’s synchrotron, researchers have found a way to negate the formation of pores — tiny holes created under the surface of a build that can initiate cracking in the finished part under stress. The mitigation strategy involves reducing the power of the laser as it slows down to make its turn along the serpentine path it takes to scan and build a metal layer. By varying the laser power throughout the build, they found they could keep the laser’s depression depth shallow and constant. The research is described in the journal Nature Communications, published online on April 30.

"We found in a lot of parts that at the end of that area where the turnaround is, there’s a huge concentration of pores, which affect the material quality. We’ve had simulations that show this, and we needed some experimental validation," lead author and LLNL researcher Aiden Martin explained. "We now have a mitigation strategy where we measure the speed of the laser as it makes that turn, and we change the power dynamically during the turnaround. If we know the speed, we can adjust the power of the laser, and that keeps that depression nice and stable at the surface, and we don’t get that depression that forms the pore at the end."

Researchers found that during the printing process, as the laser melts the metal powder and makes the turn, the laser’s power density intensifies, penetrating deep under the surface, forming a "keyhole depression" and leaving tiny bubbles of gas trailing behind it in the solidifying metal. These bubbles then cause pores to develop under the surface of the printed object.

"It’s been a known problem, but this is the first demonstration that we can correct it in a predictive way," said principal investigator Ibo Matthews, who has analyzed melt pool dynamics for several years. "Most important is the fact the pores are always created at a distinct point in time, as the laser accelerates out of the turn. The timing is quite interesting. The assumption was that pores formed only at the deepest part of the melt pool. The fact that the pores occurred after the turn was a surprise to everybody."

The mitigation technique the team developed, Matthews said, is part of a suite of tools tied to the Lab’s "intelligent feed-forward" strategy, which relies heavily on simulations and model validation prior to printing and is being adopted by companies in the automotive and aerospace industries, among others. Researchers said the strategy could be deployed on "virtually any commercial machine" by constructing power maps with a 3D slicer software that converts the parameters defined by a computer-aided design (CAD) file into machine instructions.

LLNL computer scientist Saad Khairallah developed the simulation model behind the mitigation strategy using a multi-physics code called ALE3D. The further addition of laser ray tracing to the model improved the fidelity of the predictions.

"The way you fix the problem is adding ‘cruise control’ to your simulation," Khairallah said. "I simply told the simulation to maintain the melt pool depths constant. That fixed the problem. You don’t see pores; you don’t see keyholes. And as an added benefit, you get a power map — an output of the simulation model that indicates the power needed as a function of location along the track to prevent pore formation."

One of the best methods for examining porosity as the laser scans a part is to use X-rays to see below the surface of the melt pool. Using a test chamber built at LLNL that allows researchers to spread a single thin layer of powder, LLNL and SLAC researchers captured images of the laser scanning on a synchrotron beamline. Inspired by the results of the simulations and the power map, they performed experiments showing pore formations under the surface when they kept the laser’s power constant, and a consistent melt pool depth with no pores when they reduced power at the turn. The experiments were then compared to the simulations to verify them.

The work, researchers said, provides further insight into the laser powder-bed fusion process and demonstrates the potential for science-based approaches to increase confidence in metal components produced by the process.

"The pores are a real initiator of failure, like cracking and other processes that occur at the pore sites," Martin said. "So, if we can eliminate the pores in the part, we have a harder part and something we can ultimately certify for use."

Because laser powder-bed fusion is the preferred method of metal 3D printing for many larger automotive and aerospace companies, Martin said he anticipates the mitigation strategy will be adopted for use by industry.

The next step for the team is incorporating the strategy into actual part builds that can involve more complex scan patterns. Matthews said they are interested in leveraging these methods to print lattice structures and using thermal, acoustic and tomographic methods to detect where pores begin to form in multi-layered parts.

The work was performed with funding from the Department of Energy’s Advanced Manufacturing Office, within the Office of Energy Efficiency and Renewable Energy. Ames Laboratory contributed to related work by completing design of the powder feed system for in-situ X-ray characterization during the directed energy printing process and participating in the X-ray diffraction studies.