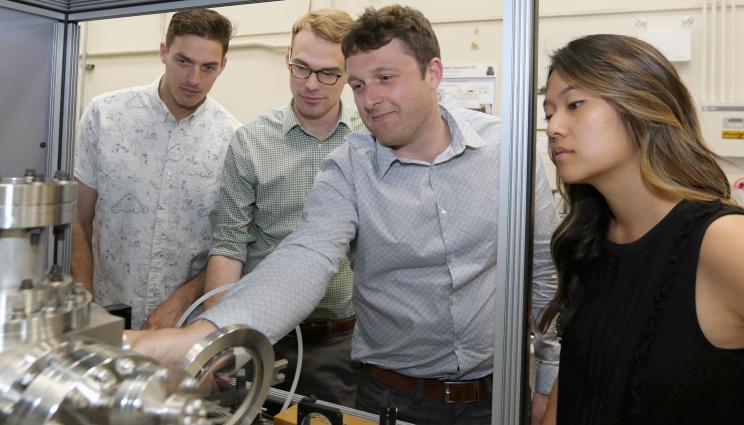 Lawrence Livermore National Laboratory researchers (from left) Phil Depond, Nick Calta, Aiden Martin and Jenny Wang are part of a multi-lab team that has successfully designed, built and tested a portable diagnostic machine capable of probing inside metal parts as they’re being printed during the laser powder bed fusion process, a common metal 3D printing approach. The researchers hope the instrument will provide insights into the causes of defects in 3D printed parts. Photo by Julie Russell/LLNL

Metal 3D printing undoubtedly has enormous potential to revolutionize manufacturing, but many industries have been slow to adopt the technology due to concerns over part quality and certification, which is essential to building confidence in the critical parts used in automotive and aerospace applications.

Through carefully designed experiments that replicate the manufacturing process, researchers at Lawrence Livermore National Laboratory (LLNL) have previously unveiled many of the complex mechanisms that can drive defect formation and limit part quality in metal 3D printing. More recently, LLNL researchers have teamed up with scientists at the SLAC National Accelerator Laboratory and Ames Laboratory to better understand this process, examine more directly what exactly leads to defects in printed parts and how those flaws might be avoided. The multi-year partnership is funded by the Department of Energy’s Energy Efficiency and Renewable Energy (EERE) Advanced Manufacturing Office and is aimed at generating interest from U.S. industry for collaborative projects.

One of the first scientific papers to come out of the partnership examines the use of X-ray imaging and diffraction to peer into metal parts as they’re being printed during the laser powder bed fusion process, a common metal 3D printing approach. Building on years of Lab research into the physics behind the process, LLNL researcher Nick Calta and his team have designed and built a portable diagnostic machine capable of probing the melt pool, the area where the passing laser meets the metal powder, fusing and producing the layers that eventually become a fully formed part. At the Stanford Synchrotron Radiation Lightsource at SLAC, researchers were able to evaluate the method and successfully observe melt pool dynamics beneath the surface, providing researchers with new insights into the process. The research was published earlier this month in the journal Review of Scientific Instruments. The journal selected the paper as an "Editor’s Pick."

"A vast majority of diagnostics use visible light, which are extremely useful but also limited to analyzing the surface of the part," explained Calta, the paper’s lead author. "If we’re going to really understand the process and see what causes flaws, we need a way to penetrate through the sample. This instrument allows us to do that."

Assembling a portable in situ diagnostic machine on an aggressive timeline was a challenge, Calta said. To get the instrument to function as it was intended, the LLNL team had to transport it to SLAC, whose synchrotron could create the X-ray flux and high energy X-rays necessary to investigate the samples. The instrument provided data on a combination of imaging and X-ray diffraction, allowing researchers to see how the metal solidifies, a key determiner of a part’s strength. Right away, the team was able to glean meaningful data that they are still in the process of analyzing.

"We’re getting information about the melt pool structure and what can go wrong during a build," said LLNL physicist and Laser Materials Science group leader Ibo Matthews, who has spent recent years developing experimental methods to understand the physics behind the laser fusion process. "The vapor plume created by the laser heating the melt pool can create pockets and pores. These pore defects can serve as stress concentrators and compromise the mechanical properties of the part."

Matthews said the ability to see the layers formed at the melt pool and comparing the X-ray images to simulations is confirming predictions of how the laser’s path, heat buildup and the gas plume caused by the laser can create defects. Combining this understanding with modeling and detailed experiments could help accelerate improvements and confidence in parts manufactured through metal 3d printing, researchers said.

"Success would be learning more about the physics in ways that let us modify the process to avoid defects," Calta said. "So far we’re getting promising results. We want to continue to optimize the instrument and apply it to different material systems. We already have a big body of knowledge based on optical data, this lets us branch out and complement that knowledge."

The multi-lab collaboration is an offshoot of the Energy Department’s National Laboratories Big Ideas Summit (BIS), an annual event designed to facilitate collaboration and strategic technical planning throughout the national laboratory complex. As part of the project, SLAC is contributing its ability to create unique X-rays and perform diagnostics, while scientists at the Ames Lab are bringing their expertise in powders and metals materials science to the table.

"It’s a really nice team because each partner brings a strength," said Tony Van Buuren, deputy division leader for S&T in LLNL’s Materials Science Division. "The team is building a capability that is somewhat unique and providing information you can’t get any other way. Together we’re bringing in the diagnostics, spinning in science and spinning out the ability to look at new materials."

While the collaboration is still in its initial stages, Calta said researchers have already begun mapping out pore formation and extracting information on cooling rates. They expect the new instrument will lead to an improved understanding of the laser fusion process and incite further interest from industry in metal 3D printing. Eventually, the researchers want to exploit their flexibility to add optical diagnostics typically used on commercial machines to correlate with the X-ray imaging.

"You can’t tell what’s inside the box by looking outside the box," Van Buuren said. "The purpose of this project is to accelerate the adoption of additive manufacturing (AM) for metallic components across the manufacturing sector by developing sophisticated in-situ tools to enable rapid process development of the AM components. With new materials, we don’t yet understand the properties and we need to be able to look at the process in real-time. It’s a bit different focus than what we usually do at the Lab. We want to build up a capacity that industry would come in and use."

In addition to contributors from the SLAC National Accelerator Laboratory and the Ames Laboratory, other LLNL researchers who worked on the project included Jenny Wang, Aiden Martin, Gabe Guss and Phil DePond.