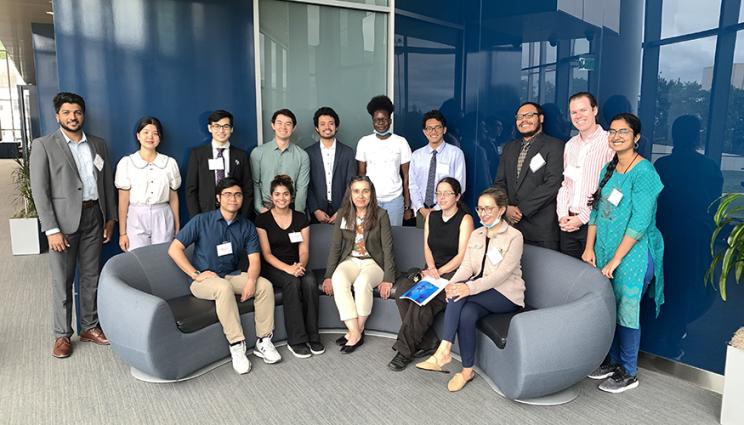 LLNL Director Kim Budil met with students at Case Western Reserve University to celebrate a new agreement to support student opportunities and internships bringing a pipeline of talent to LLNL.

The leaders of Case Western Reserve University and Lawrence Livermore National Laboratory (LLNL) signed a memorandum of understanding (MOU) to accelerate their efforts in shared areas of excellence.

In the document, the two institutions agreed to support student opportunities and internships at LLNL to foster a strong pipeline of talent to the Lab and pursue research activities in areas of joint interest.

Case Western Reserve and LLNL officials said the university and Lab have benefited over the last several years as their relationship has grown. LLNL has supported advanced research at the university, and CWRU provided a talent pipeline to LLNL, beginning with five internships over the last few years and the hiring of an employee in 2020.

“We’re pleased to continue our successful collaboration with Case Western Reserve,” Budil said. “This agreement provides an important framework as we partner to advance some of today’s most transformative science and technology.”

“Both of our teams have embraced opportunities to partner with enormous enthusiasm and ingenuity,” Kaler said. “We are grateful to Congresswoman Marcy Kaptur for helping to catalyze this connection, and very much look forward to building on our strong progress to date.”

LLNL is working closely with Professor Roger French at Case Western along with Los Alamos and Sandia national laboratories and the Kansas City plant to investigate material degradation and lifetime extension of advanced materials. The Lab also is a member of the National Science Foundation-funded Materials Data Science for Reliability Center at CWRU, a joint project with the University of Pittsburgh.

Case Western and LLNL have joined forces in research across areas such as bioengineering to develop flexible microelectrode peripheral nerve implants, including a separate DARPA project to work with vendors to test and deploy led by LLNL’s Razi Haque and Professor Dustin Tyler; in electrochemical deposition of metal coatings headed by LLNL’s Nik Dudukovic and Professor Rohan Akolkar; and in magnetostrictive materials science led by LLNL’s Scott McCall and Professor Matt Willard.

As a result of the growing relationship with Case Western, LLNL and Case have received DOE funding to improve the production of neodymium, a metal critical to energy storage devices; the project is led by McCall and Akolkar. LLNL’s Alex Baker and Akolkar are leading an extended effort in this area supported by the Critical Materials Institute — a DOE Energy Innovation Hub including partners Case Western, Idaho and Oak Ridge national laboratories and LLNL. LLNL and Case also are working together in polymer extrusion and polymer recycling, a project led by LLNL’s Fei Zhou and Professor Joao Maia.