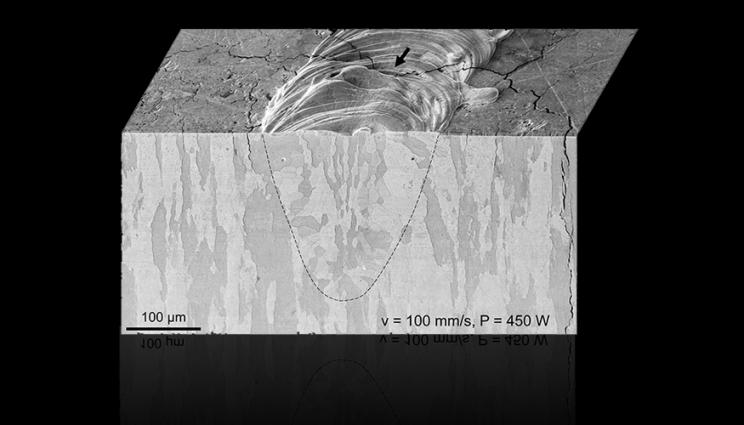 By combining simulations with high-speed videos taken during the laser powder-bed fusion process, LLNL scientists were able to visualize the ductile-to-brittle transition in 3D-printed tungsten in real-time, allowing them to observe how microcracks initiated and spread in the metal. Photos taken with a scanning electron microscope show the microcrack network branches across the laser melt track on the surface and can penetrate deep into the adjacent substrate material, preferentially along grain boundaries.

Boasting the highest melting and boiling points of all known elements, tungsten has become a popular choice for applications involving extreme temperatures, including lightbulb filaments, arc welding, radiation shielding and, more recently, as plasma-facing material in fusion reactors such as the ITER Tokamak.

However, tungsten’s inherent brittleness, and the microcracking that occurs while additively manufacturing (3D printing) with the rare metal, has hampered its widespread adoption.

To characterize how and why these microcracks form, Lawrence Livermore National Laboratory (LLNL) scientists have combined thermomechanical simulations with high-speed videos taken during the laser powder-bed fusion (LPBF) metal 3D printing process. Whereas previous research was limited to examining cracks post-build, scientists for the first time were able to visualize the ductile-to-brittle transition (DBT) in tungsten in real-time, allowing them to observe how microcracks initiated and spread as the metal heated and cooled. The team was able to correlate the microcracking phenomenon with variables such as residual stress, strain rate and temperature, and confirm the DBT caused the cracking.

Researchers said the study, recently published in the journal Acta Materialia and featured in the September issue of the prestigious MRS Bulletin, uncovers the fundamental mechanisms behind cracking in 3D-printed tungsten and sets a baseline for future efforts to produce crack-free parts from the metal.

“Because of its unique properties, tungsten has played a significant role in mission-specific applications for the Department of Energy and Department of Defense,” said co-principal investigator Manyalibo “Ibo” Matthews. “This work helps pave the way toward new additive manufacturing processing territory for tungsten that can have significant impact to these missions.”

Through their experimental observations and computational modeling performed using LLNL’s Diablo finite element code, the researchers found that microcracking in tungsten occurs in a small window between 450 and 650 degrees Kelvin and is dependent on strain rate, which is directly influenced by process parameters. They also were able to correlate the size of the crack-affected area and crack network morphology to local residual stresses.

Lawrence Fellow Bey Vrancken, the paper’s lead author and co-principal investigator, designed and performed the experiments and also conducted most of the data analysis.

“I had hypothesized that there would be a delay in the cracking for tungsten, but the results greatly exceeded my expectations,” Vrancken said. “The thermomechanical model provided an explanation for all our experimental observations, and both were detailed enough to capture the strain rate dependence of the DBT. With this method, we have an excellent tool to determine the most effective strategies to eliminate cracking during LPBF of tungsten.”

Researchers said the work provides a detailed, fundamental understanding of the influence of process parameters and melt geometry on crack formation and shows the impact material composition and preheating have on the structural integrity of parts printed with tungsten. The team concluded that adding certain alloy elements could help reduce the DBT transition and strengthen the metal, while preheating could help mitigate microcracking.

The team is using the results to evaluate existing crack-mitigation techniques, such as process and alloy modifications. The findings, along with the diagnostics developed for the study, will be crucial to the Laboratory’s ultimate goal of 3D printing crack-free tungsten parts that can withstand extreme environments, researchers said.

The work was funded through the Laboratory Directed Research and Development program. LLNL engineer Rishi Ganeriwala performed the finite element model simulations and co-authored the paper.

"Analysis of laser-induced microcracking in tungsten under additive manufacturi…