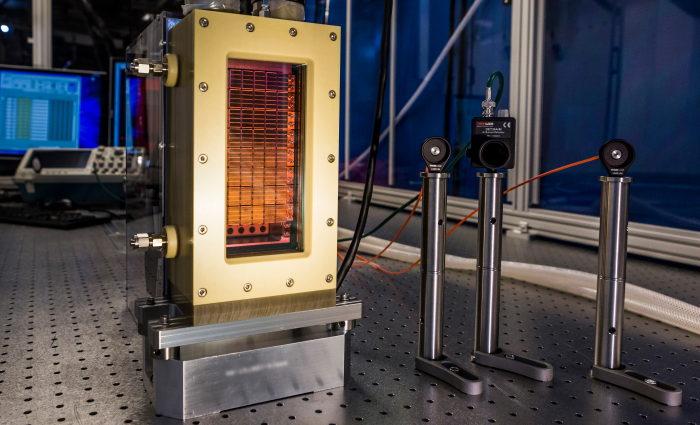 The High-power Intelligent Laser Diode System (HILADS) can produce 3.2 megawatts of peak optical power, making it the highest peak power diode array in the world. HILADS is a key component of the High-Repetition-Rate Advanced Petawatt Laser System (HAPLS), which will be the world’s highest repetition rate petawatt laser system when completed. Photo by Damien Jemison.

Lawrence Livermore National Laboratory researchers are the recipients of three awards among the top 100 industrial inventions worldwide for 2014.

The trade journal R&D Magazine announced the winners of its annual awards, sometimes called the "Oscars of invention," Friday in Las Vegas. With this year's results, the Laboratory has now captured a total of 155 R&D awards since 1978.

"I am extremely pleased that the Laboratory has received this recognition through the R&D 100 awards this year," Lab Director Bill Goldstein said. "The Laboratory has again succeeded in receiving this noteworthy acclaim in a broad range of research areas that benefit the nation."

A 3D printing device, the Large Area Projection Micro Stereolithography (LAPµSL) technology is an image projection micro-stereolithography system that rapidly produces very small features over large areas, by using optical techniques to write images in parallel, as opposed to conventional techniques, which either require mechanical stages move or the rastering of beams to expose pixels in series. 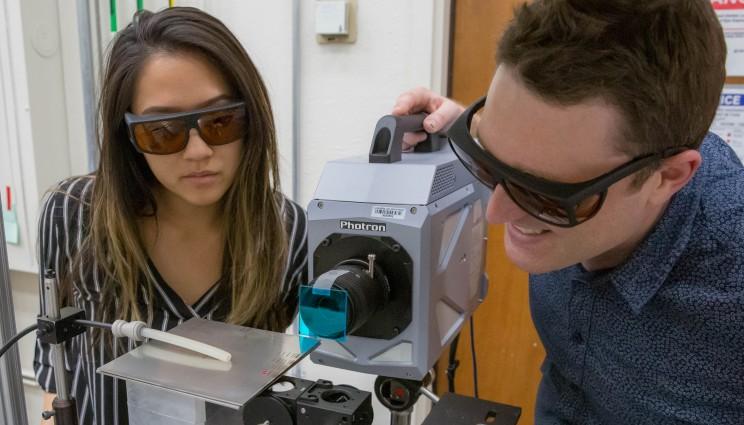 The LAPµSL system is conceptually similar to building a mosaic of tiles that combine to make a much larger picture. Each one of the tiles has a lot of detail and they go together to form the picture that, in turn, has significantly more detail.

Many applications would benefit from the capability to create complex shapes and small features, unlike other state-of-the-art 3D printers, which sacrifice overall part size in exchange for small feature size. Parts produced with LAPμSL can be used as master patterns for injection molding, thermoforming, blow molding and various metal-casting processes. Some of the other commercial applications envisioned for the LAPμSL system include medical devices, dentistry and microfluidics.

Simulations run in days rather than years

The code provides an innovative computational method that speeds up simulations of realistic fuels a thousand-fold over methods traditionally used for internal combustion engine research.

These complex combustion simulations can resolve tens of thousands of chemical reactions, producing results in days instead of the years required by previous methods.

One aim of the research is to develop engines that are highly efficient but produce little pollution. Instead of counting on high-temperature combustion control methods that are used in current gasoline and diesel engines, researchers designing next-generation engines are seeking to manage the ignition process through fine control of chemical kinetics, resulting in lower combustion temperatures and reduced exhaust emissions.

Beyond applications for manufacturers of car, truck and jet engines, potential uses for the chemistry solver are envisioned in the fields of nuclear energy, biology, plasma physics and astrophysics.

A new laser pumping system, known as the High-power Intelligent Laser Diode System (HILADS), employs advances in laser diodes and electrical drivers to achieve two-to-three-fold improvements in peak output power and intensity over existing technology, in a 10 times more compact form that can scale to even larger arrays and power levels.

Developed by a team of LLNL scientists and engineers, in partnership with Tucson, Arizona-based Lasertel, HILADS has produced 3.2 megawatts of peak optical power from four pump systems at a 20 Hertz repetition rate in its largest power output to date.

Pulsed laser diode arrays, such as HILADS, are essential for pumping high energy solid-state lasers at frequencies above 5 Hertz for materials processing such as laser peening, defense applications and scientific exploration. HILADS is being deployed on the high repetition rate, petawatt laser system that LLNL is developing for the European Light Infrastructure initiative, which will use high energy diode pumped lasers to study light-material interaction physics, with expected spinoffs for industrial and medical technologies.

HILADS improves upon other laser technologies by providing significantly more optical power at significantly higher intensity in a system with a substantially smaller footprint and a higher degree of integration. These developments enable the creation of more energetic laser systems that exhibit higher wallplug efficiency.