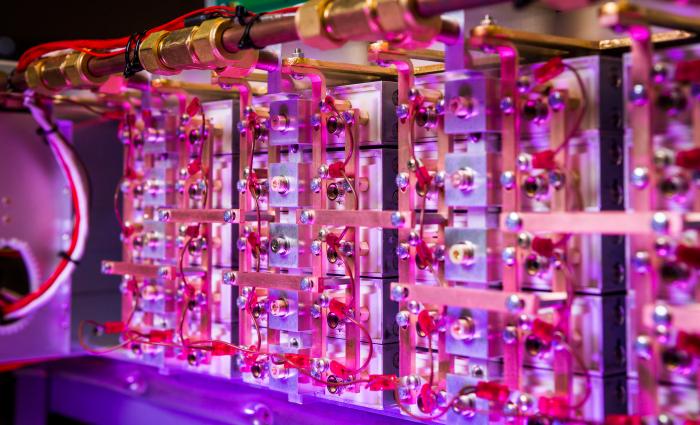 To drive the diode arrays, LLNL needed to develop a completely new type of pulsed-power system, which supplies the arrays with electrical power by drawing energy from the grid and converting it to extremely high-current, precisely-shaped electrical pulses.Photos by Damien Jemison.

The diode arrays are a key component of the High-Repetition-Rate Advanced Petawatt Laser System (HAPLS), which is currently under construction at LLNL. When completed, the HAPLS laser system will be installed in the European Union’s Extreme Light Infrastructure (ELI) Beamlines facility, under construction in the Czech Republic.

HAPLS is designed to be capable of generating peak powers greater than one petawatt (1 quadrillion watts, or 1015) at a repetition rate of 10 Hertz, with each pulse lasting 30 femtoseconds (30 quadrillionths of a second). This very high repetition rate will be a major advancement over current petawatt system technologies, which rely on flashlamps as the primary pump source and can fire a maximum of once per second. In HAPLS, the diode arrays fire 10 times per second, delivering kilojoule laser pulses to the final power amplifier. The HAPLS is being built and commissioned at LLNL and then installed and integrated into the ELI Beamlines facility starting in 2017.

To meet the rigorous design specification for HAPLS, LLNL had to look past current laser pump technology. Previously, high energy, scientific laser systems – such as LLNL’s National Ignition Facility – utilized flashlamp technology. Intense flashes of white light from these giant flashlamps "pump" the laser-active atoms in large slabs of laser glass to a higher or more "excited" energy state. In order to get to the high repetition rate required by HAPLS, the team needed to come up with technologies that transfers less heat than flashlamps and removes it at faster rates, which lessens the time between laser shots. 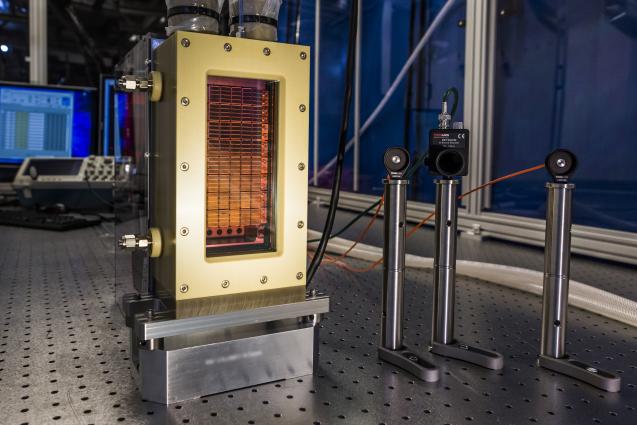 "Flashlamp technology for lasers has been around for more than 50 years, and we’ve pretty much pushed the limits of that technology and maxed out what we can do with them," said Andy Bayramian, systems architect on HAPLS. "We’ve closed the books on flashlamps and started a new one with these laser diode arrays, enabling a far more advanced class of high-energy laser systems."

"We are thrilled to be working with LLNL, who continues to push the boundaries for high-energy laser systems. Our collaboration has enabled several new benchmarks for laser performance to be set in a remarkably short period of time," Lasertel President Mark McElhinney said. "This is a validation of the significant progress that has been made toward the routine production of high-energy lasers for revolutionary commercial applications and groundbreaking scientific research."

In addition, LLNL needed to develop a completely new type of pulsed-power system in order to drive the diode arrays. The pulsed-power system supplies the arrays with electrical power by drawing energy from the grid and converting it to extremely high-current, precisely shaped electrical pulses. Each power supply is capable of driving 40,000 amps. Livermore holds a patent on this technology.

High-average-power, high-energy laser systems enabled by these technologies will drive international scientific research in areas as diverse as advanced imaging, particle acceleration, biophysics, chemistry and quantum physics in addition to national security applications and industrial processes such as laser peening and laser fusion.

"Combining Lasertel’s diode technology with Livermore’s highly compact and efficient pulsed-power system is THE enabling technology to drive high energy lasers at rep rate," Haefner said. "This combination of expertise has created a robust, stable, laser driver platform with high reliability, cost efficiency and – most important for the scientific user community – long-term scalability to maintain competitiveness in the future."