The award, given for the Large Area Projection Micro Stereolithography (LAPµSL) technology, was presented to Bryan Moran at the recent FLC Far West/Mid-Continent Region meeting in San Diego.

The LAPµSL is an image projection micro-stereolithography system that rapidly produces very small features over large areas, by using optical techniques to write images in parallel, as opposed to conventional techniques, which either require mechanical stages moves or the rastering of beams to expose pixels in series. 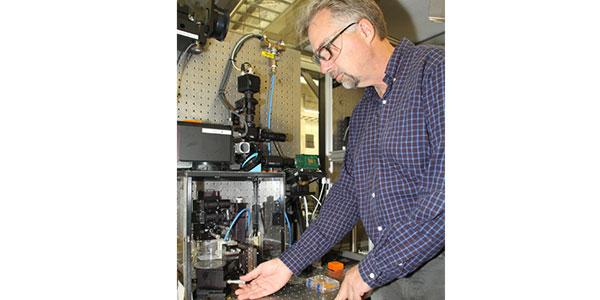 "The LAPµSL system is conceptually similar to building a mosaic of tiles that then combine to make a much larger picture," Moran explained. "Each one of the tiles has a lot of detail and they go together to form the picture that, in turn, has significantly more detail.

"It’s a new instrument that can make larger-size parts very quickly and is more useful."

Many applications would benefit from the capability to create complex shapes and small features, unlike other state-of-the-art 3D printers, which sacrifice overall part size in exchange for small feature size.

Parts produced with LAPμSL can be used as master patterns for injection molding, thermoforming, blow molding and various metal-casting processes.

In post-processing, the LAPμSL’s output can be coated with metal, ceramic, graphene, thin films and many other materials. The original polymer can be removed via chemical means or heat, leaving structures that can be back-filled with various materials or left hollow for extremely light, complex and large parts. LAPμSL can be used to quickly make these large parts with great complexity and detail.

Some of the other commercial applications envisioned for the LAPμSL system by Moran include medical devices, dentistry and microfluidics.

The system has garnered "significant attention" at LLNL from potential users and collaborators, and is considered an excellent candidate for technology transfer, according to Lab Industrial Partnership Office officials.

The current LAPμSL system has been built with off-the-shelf components that are not optimized for this application, Moran said, adding that he is in the process of developing a new system with LLNL-designed and customized optics.