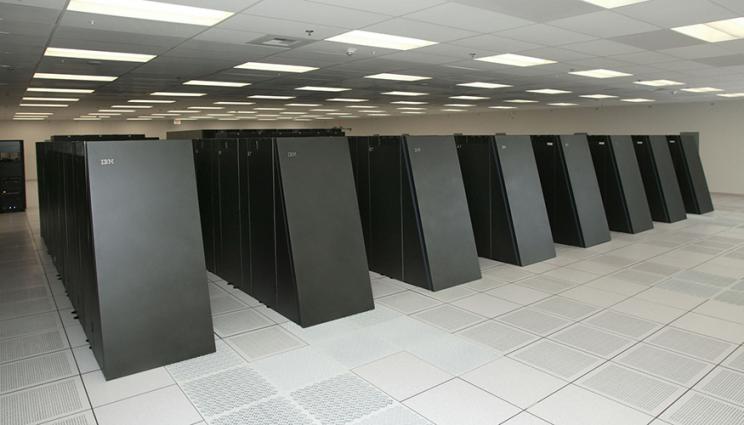 LLNL scientists were part of a team that won the 'Test of Time' award at the 2020 Supercomputing Conference on for a paper outlining LLNL’s Blue Gene/L supercomputer.

A team of current and former Lawrence Livermore National Laboratory (LLNL) and IBM scientists won the annual “Test of Time” award at the 2020 Supercomputing Conference on Nov. 19 for a paper outlining LLNL’s Blue Gene/L supercomputer.

Published by the Supercomputing Conference in 2002, the paper was the first peer-reviewed overview article to disclose details of Blue Gene/L, including its nodes, system packaging and software support. Funded through a partnership between IBM and LLNL as part of the Department of Energy’s (DOE) ASCI Advanced Architecture Research Program, the machine was sited at LLNL in 2004.

The first in a series of massively parallel supercomputers under IBM’s Blue Gene project to build the first petascale supercomputer, the machine was predicted to be at least 15 times faster, 15 times more power efficient and consume about 50 times less space per computation than the fastest supercomputers that existed at the time.

“The Blue Gene/L effort was born out of an urgent need to deliver more powerful but affordable computers for the National Nuclear Security Administration’s (NNSA) national security work and IBM’s willingness to help,” said Terri Quinn, LLNL’s deputy associate director for High Performance Computing. “This was a calculated risk by both parties that paid off. The line of Blue Gene systems, beginning with BG/L and up to the recently retired Sequoia, were marvels, and set us on the path for exascale-class applications and systems. Speaking for LLNL, we are honored this effort was recognized by the Test of Time committee.”

Targeted to deliver a peak processing power of 360 teraFLOPs, in Nov. 2004, Blue Gene/L took first place on the TOP500 list, achieving a performance in the High Performance Linpack benchmark of 70.72 teraFLOPs. It remained the fastest supercomputer in the world until June 2008, peaking at 596 teraflops after a series of expansions. Used by scientists at LLNL, Los Alamos and Sandia national laboratories, the machine ran key stockpile stewardship applications for NNSA, in addition to many other challenging scientific simulations. It was also a computational science research machine for evaluating advanced computer architectures.

Running on Blue Gene/L, LLNL researchers won the 2005 Gordon Bell Prize for peak performance for a simulation of solidification in tantalum and uranium at extreme temperatures and pressure, the first scientific application to exceed 100 teraFLOPS of sustained performance. The following year, a team including LLNL scientists won the Gordon Bell Prize for a large-scale electronic structure simulation of the heavy metal molybdenum using Blue Gene/L. And in 2007, a joint LLNL/IBM team won another Gordon Bell award for a first-of-a-kind simulation of Kelvin-Helmholtz instability in molten metals on the system.

“This machine changed everything,” said LLNL physicist Fred Streitz, who led the 2005 Gordon Bell Prize team and is currently on assignment at DOE’s Artificial Intelligence and Technology Office. “The Blue Gene/L machine really set the stage for what massive parallelism could accomplish. It seems quaint now to think about people questioning whether you could use 100,000 processors, but you look at modern machines that have millions and millions of processor units and no one says, ‘oh you can’t use that,’ because you know what? We can. It was quite a remarkable time, and just an enormous amount of fun. And through all this time it stands as one of the things I’m most proud of, that we were a part of making this little bit of history.”

Announced during the SC20 Awards Ceremony, the Test of Time award recognizes a paper from a past Supercomputing Conference that has deeply influenced the HPC discipline, made a historical impact and changed HPC trends. It has been handed out every year since 2013.

“For nearly a decade the Blue Gene/L series won multiple Top500 awards and Gordon Bell Prizes, including finalists, and served as a vehicle for many research publications,” said Test of Time Award Chair Amanda Randles, a former LLNL computational scientist and current assistant professor in biomedical sciences at Duke University. “In addition, Blue Gene/L was a precursor of the importance of energy efficiency before it was a recognized problem in the community. It’s now a dominant constraint in the design of HPC architectures. This paper has had a tremendous and ongoing impact on the design of subsequent supercomputers.”

Among the paper’s co-authors was LLNL physicist Pavlos Vranas, who was at IBM at the time. Vranas worked in the core architecture group and helped design an important part of the network router.

“In the computing world, where things get old very fast, it means a lot to me that Blue Gene/L has been recognized with this award,” Vranas said. “When we were architecting and designing Blue Gene/L, I felt this was a unique machine. Not only did we have a new technology — “system-on-a-chip”— but the architecture was based on a history of machines born from the science of Lattice Quantum Chromodynamics (Lattice QCD), the theory of sub-nuclear physics that has been my field of theoretical physics research. And as is always the case with these things, the team was unique, and I feel honored to have worked with them. I remember that time very fondly.”

For more on the Test of Time Award, visit the web.

"An Overview of the BlueGene/L Supercomputer"
Test of Time Award