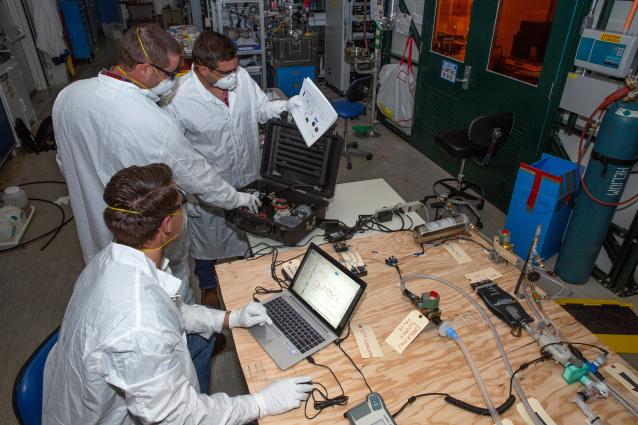 At Lawrence Livermore National Laboratory, from left: mechanical engineer Ken Enstrom and technicians Greg Norton and Aaron Sperry tested and validated simple ventilator prototypes that could be easily assembled from readily available parts. The effort came in response to a potential surge in demand for ventilators due to the COVID-19 pandemic. Photo by Julie Russell/LLNL

While hospitals across the U.S. faced a possible shortage of mechanical ventilators due to COVID-19, a self-assembled “skunk works” team at Lawrence Livermore National Laboratory (LLNL) worked tirelessly to prototype a simple ventilator design for quick and easy assembly from available parts.

Dubbed the “Novel Emergency Response Ventilator” (NERVe), the design is derived from proven concepts and contains parts that are not being used by commercial ventilator manufacturers, to avoid disrupting already thin supply chains. It is designed to meet the functional requirements of COVID-19 patients requiring mechanical ventilation, including a simple user interface, air flow circuits for inhalation and exhalation, and alarms to notify physicians if air pressures get too low. It can operate in a continuous ventilation mode — common for late-stage COVID-19 patients — but can adapt to patients who spontaneously breathe on their own.

“The LLNL team has rapidly produced and tested prototypes, vetted them with experts and in parallel, is partnering with manufacturing organizations to be able to respond as fast as possible,” said LLNL’s Micro- and Nano Technology Section Leader Jack Kotovsky, who initiated the effort. “The process is similar to a medical device startup compressed from six years to six weeks. The goal is not to make the best machine possible, it’s more important to make the best machine that can be built with available parts, or if we did have to fabricate something, it would have to be very easy to do. Just inventing another ventilator that uses the same parts that ventilator manufacturers are waiting for doesn’t help, it actually hurts in some ways.”

The prototype will need to be approved by the U.S. Food and Drug Administration (FDA) before it can be used with COVID-19 patients.

“We are interested in teaming with commercial manufacturers that are able to scale-up production of this prototype system and bring it to market as quickly as possible,” said Anantha Krishnan, associate director for Engineering at LLNL. The Laboratory recently published a FedBizOpps (FBO) announcement seeking partnerships with the private sector.

In March, projections indicated the nation’s total inventory of mechanical ventilators would be far lower than what would be required. While measures such as social distancing and other “flattening-the-curve” measures appear to have staved off the massive shortfall that was initially predicted, stopgap ventilators that can be easily produced could prove to be a valuable resource for hospitals in rural or undeveloped areas, or in the event of a surge of new cases, according to experts.

Determined to contribute to the fight against COVID-19, the Laboratory team set about developing a prototype ventilator system that could potentially serve as a stopgap solution until ventilator manufacturers could catch up to the anticipated demand. The design would have to be adequately functional and suitable for medical use, but simple enough that it could be mass produced from off-the-shelf parts, to make the greatest impact on the global health crisis.

They first looked at CPAP machines — breathing aids commonly used to treat sleep apnea — as a potential viable option for sourcing components. When that proved unfeasible, the team started from scratch, studying ventilator design and manufacturing as well as talking to medical professionals. The team includes 20 scientists and engineers from the Lab’s Computing, Engineering and Physical and Life Sciences directorates who, before shelter-in-place orders went into effect, were working on national security efforts.

They received help from experts in the field, including intensive care unit doctors from the University of California, San Francisco, researchers from Colorado State University, associates of Homewood Consulting of Birmingham, Alabama, the University of Alabama at Birmingham and the Children’s of Alabama hospital, as well as the director of pediatric pulmonary medicine at Atrium Health in Charlotte. With many team members working around the clock, the effort produced a prototype that is being tested in the Laboratory’s Center for Micro- and Nanotechnology.

In the lab, researchers used a commercial tool to measure factors such as air pressures and oxygenation levels to assess the performance of the experimental hardware prototypes, and to ensure they had the functionality that doctors need to treat Acute Respiratory Distress Syndrome caused by COVID-19.

“Developing a scalable ventilator has been an experience reminiscent of high school science fairs,” said LLNL mechanical engineer Ken Enstrom, who worked on testing the prototype. “The technology is fairly simple, and a fully functional prototype was developed in a matter of a couple of days. Working with this team of experts gave me hope and motivation that we could contribute to helping solve this demand problem.”

Kotovsky said while the prototype ventilator is simplistic, it is high-functioning and intended to be “forward compatible,” capable of additional features in the future such as wireless monitoring to protect clinicians from excess exposure.

In an “all-hands-on-deck” effort reminiscent of a wartime footing, LLNL is just one of many institutions and private companies that is designing, building or sourcing materials for novel simple ventilators, joining Ford, the Massachusetts Institute of Technology, Dyson, Sandia National Laboratory, the University of California, Berkeley, General Motors, Virgin Orbit, Tesla and others.

“Building something fast that can get through FDA approval, is easy to operate and doesn’t interfere with the supply chain is the key to helping people with this illness,” Kotovsky said. “There are times like 9/11 and this pandemic, where crisis brings out the best in people. Everyone is eager to help; the people that are on the project and anybody I talk with about it — everybody wants to offer their support or get involved, and it’s a beautiful thing.”

Companies interested in working with LLNL to help mass produce and commercialize the prototype ventilator are invited to visit the site.