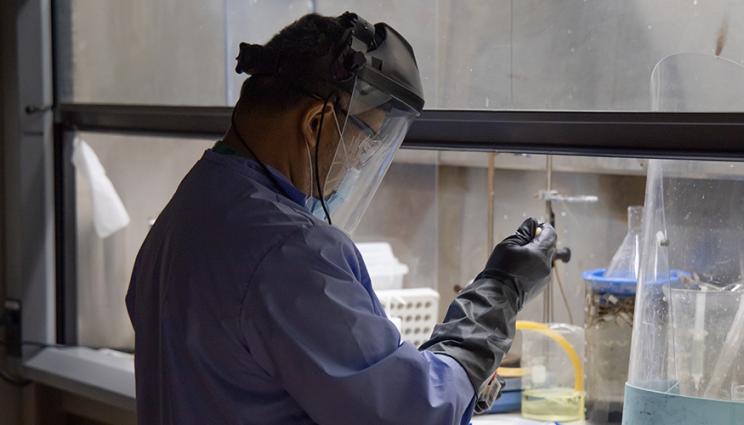 Synthetic organic chemist Saphon Hok, who works in the Forensic Science Center, carefully uses a pipet to transfer a reagent into a synthesis reaction vial that will generate an authentic reference material used to verify a proficiency test result.

In another month-and-a-half, a score of chemists from Lawrence Livermore National Laboratory's Forensic Science Center (FSC) will start two weeks of long days to undertake the Organization for the Prohibition of Chemical Weapons (OPCW) environmental proficiency test.

Livermore chemists have been taking the proficiency tests each October since 2001, with LLNL serving as one of two United States laboratories certified to test for chemical weapons since 2003.

“Each year, we become a little anxious as the proficiency test date nears and we start to prepare our instrumentation and our quality control samples,” said Armando Alcaraz, the principal investigator for the Lab’s OPCW efforts since 2001.

“But there’s also the excitement and challenge of working to do our best possible job to identify the unknowns that are in the samples.”

This year’s test offers a new wrinkle for the Lab team in the wake of the SARS-CoV-2 virus. They already have started discussions on how to perform their work with the proper COVID-19 precautions.

“Our group meetings are very important for us to share ideas and to solve challenges from the samples as we identify them. We’ve reserved an auditorium to accommodate social distancing,” Alcaraz said.

Every October, Livermore scientists and those from other laboratories around the world attempt to identify any “suspected” chemical weapons compounds in six samples within a 15-day period in the proficiency tests.

To retain their OPCW certification, LLNL and other OPCW-designated laboratories must maintain a three-year rolling average of at least two “A” grades and one “B” in the ongoing tests.

“The chemical analysis capability that is exercised through the OPCW proficiency tests is foundational to much of the research and real-world sample analysis we perform in the FSC,” said Director Audrey Williams.

In last fall’s 46th OPCW environmental proficiency test, the FSC chemists scored an “A” grade for the 10th straight year.

“This was another challenging and realistic proficiency test,” Alcaraz said. “The samples were chemically complex, contained a red herring (if reported, it would result in an “F” grade) and a reportable spiked compound appearing to be a red herring (diethylphosphate). Labs that did not report diethylphospate (11 out of 20 labs) dropped a letter grade for the false negative result; fortunately, our team recognized this chemical as a degradation product of amiton, a Chemical Weapons Convention (CWC) schedule chemical.”

LLNL received its original OPCW certification in 2003. Its work is carried out by the Laboratory's FSC, which is part of the Global Security Principal Directorate and is funded by the National Nuclear Security Administration’s Office of Nuclear Verification (NA-243).

The OPCW oversees compliance for the Chemical Weapons Convention treaty, which has been in force since 1997 and currently has 193 nations or state parties.

The samples for last October's proficiency test, taken by LLNL and 18 other laboratories around the world, were prepared by the TNO Laboratory of The Netherlands. The participating laboratories' test reports were then evaluated by the Defence Science and Technology Laboratory from the United Kingdom.

Three of Livermore's “A” grades over the past 10 years, including its 2018 grade, have been received for serving as the OPCW's evaluation lab, grading reports.