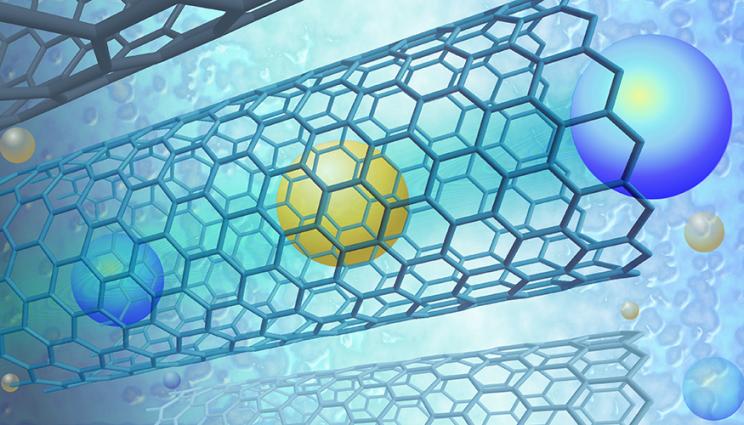 Artistic rendering of fast ion permeation inside single-walled carbon nanotubes. Small ions such as potassium, chloride and sodium permeate through the inner volume of nanometer-wide carbon nanotubes at rates that surpass diffusion in bulk water by an order of magnitude. Image by Francesco Fornasiero/LLNL.

The ability to separate molecular constituents in complex solutions is crucial to many biological and man-made processes. One way is via the application of a concentration gradient across a porous membrane. This drives ions or molecules smaller than the pore diameters from one side of the membrane to the other while blocking anything that is too large to fit through the pores.

In nature, biological membranes such as those in the kidney or liver can perform complex filtrations while still maintaining high throughput. Synthetic membranes, however, often struggle with a well-known trade-off between selectivity and permeability. The same material properties that dictate what can and cannot pass through the membrane inevitably reduce the rate at which filtration can occur.

In a surprising discovery published in the journal Advanced Science, LLNL researchers found that carbon nanotube pores (graphite cylinders with diameters thousands of times smaller than a human hair) might provide a solution to the permeability vs. selectivity tradeoff. When using a concentration gradient as a driving force, small ions, such as potassium, chloride and sodium, were found to diffuse through these tiny pores more than an order of magnitude faster than when moving in bulk solution.

“This result was unexpected because the general consensus in the literature is that diffusion rates in pores of this diameter should be equal to, or below what we see in bulk,” said Steven Buchsbaum, lead author of the paper.

The team believes this work has significant implications in several technology areas. Membranes employing carbon nanotubes as transport channels could enable ultra-rapid hemodialysis processes that would greatly reduce treatment time. Similarly, cost and time for purifying proteins and other biomolecules as well as recovering valuable products from electrolyte solutions could be drastically reduced. Enhanced ion transport in small graphitic pores could enable supercapacitors with high power density even at pore sizes closely approaching those of the ions.

To perform these studies the team leveraged previously developed membranes that allow for transport to occur only through the hollow interior of aligned carbon nanotubes with a few nanometer diameters. Using a custom diffusion cell, a concentration gradient was applied across these membranes and the transport rate of various salts and water was measured. “We have developed rigorous control tests to make sure there was no other possible explanation of the recorded large ion fluxes, such as transport occurring through leaks or defects in our membranes,” Buchsbaum said.

To better understand why this behavior occurs, the team enlisted the help of several LLNL experts. Anh Pham and Ed Lau used computational simulations and April Sawvel used nuclear magnetic resonance spectroscopy to study the movement of ions inside carbon nanotubes. Several possible explanations have been successfully ruled out, making the picture clearer. However, a complete, quantitative understanding of the observed transport rates is still being developed.

Other contributors to this work include Melinda Jue, Chiatai Chen, Eric Meshot, Sei Jin Park, Marissa Wood and Kuang Jen Wu from LLNL and Camille Bilodeau from Rensselaer Polytechnic Institute. This work was supported by the Chemical and Biological Technologies Department of the Defense Threat Reduction Agency in the "Dynamic Multifunctional Materials for a Second Skin D[MS]2" program.