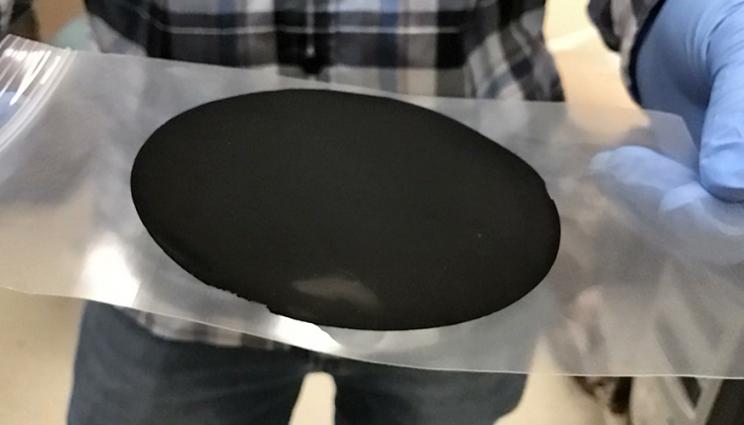 Chemically robust materials that selectively transport molecules at a high rate are key for developing advanced membrane systems outperforming state-of-the-art products. Carbon nanotubes – all-carbon channels more than 50,000 times thinner than a human hair – belong to this class of highly promising membrane building blocks. Unlike conventional porous materials, these tiny channels allow for exceptionally fast gas and liquid flow that gets even faster as the tubes get smaller

To reap the most benefits of these extraordinary materials, maximizing the density of open carbon nanotubes across the membrane is critical. Researchers at LLNL grew high density, single-walled nanotubes on 4-inch silicon wafers and used them to create membranes with exceptional transport properties at scale.

“Scaling up carbon nanotube membranes without introducing leaks is no small task,” said lead author and LLNL postdoctoral researcher Melinda Jue. “We rigorously control and characterize our membranes to ensure that they’re defect-free before using them to accurately measure flow enhancement.”

There are 10 times more conductive nanotubes in these large area membranes than previously achieved.

“By using a high density of carbon nanotubes as transport pathways, we are able to make membranes that are 6,200 times more water permeable than predicted by theory and have water flow up to 10 times larger than commercially available membranes with similar pore size,” said Francesco Fornasiero, the LLNL scientist leading the project.

Together with quantifying the transport enhancement enabled by carbon nanotubes, the research team investigated the nanofiltration capability of these large-area carbon nanotube membranes.

“You could imagine using these membranes to efficiently separate highly saline solutions where you want to remove the salt while concentrating the more valuable component.” Jue said.

Performance degradation due to fouling is a major obstacle in the widespread use of membrane technologies, and counteracting its effects requires treatment of the membranes with harsh chemicals. The robust nature of carbon nanotubes and the polymer matrix also leads to excellent chemical stability, allowing for easy cleaning of the membranes. “Then when the membrane gets dirty, you can clean it with bleach without having to worry about degradation like with typical polymer membranes,” Jue said.