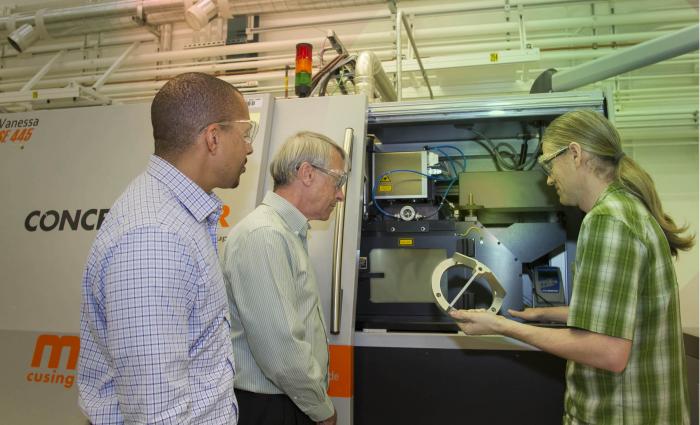 The award is from America Makes, the National Additive Manufacturing Innovation Institute that’s focused on helping the U.S. grow capabilities and strength in 3D printing. America Makes is funding the GE Global Research and Lawrence Livermore project to develop additive manufacturing (AM) technologies that allow more public and private sector organizations to enter the field.

The project intends to develop and demonstrate software algorithms that will allow selective laser melting (SLM) to produce metal parts that are high quality and durable. SLM is a metal powder-based, AM process where a 3D part is produced, layer by layer, using a focused, high-energy laser beam to fuse the metal powder particles together.

Currently, there is no common approach to SLM that comprehensively reduces problems associated with this method such as surface roughness, residual stress, porosity and micro-cracking. Without careful optimization of the process, these issues may cause parts to fail.

"With the SLM processes in place now, you don’t always end up with a part that is structurally sound," said Ibo Matthews, a researcher with LLNL’s Accelerated Certification of Additively Manufactured Metals (ACAMM) Strategic Initiative team who is leading the Lab’s effort on the joint project. "It’s critical to have mechanically robust parts, especially for applications in industries such as aerospace and energy, where part failure could lead to major problems."

In order to print a 3D part using the SLM process, the user must enter data into the printer using a stereolithography (STL) file, which is a digitized 3D representation of the desired build.

"Ideally, you would send the STL file to an arbitrary 3D printer and it will print out parts that are consistent in terms of dimensions and material properties," Matthews said. "Currently, that doesn’t happen."

That’s partly because errors appear during the initial translation of the STL file, requiring the user to fill in missing information as well as specify the type of powder material used. To further complicate matters, traditional printer designs treat every layer of powder the same, without giving consideration to the thermal properties of the powder. Some printer systems provide more control than others. 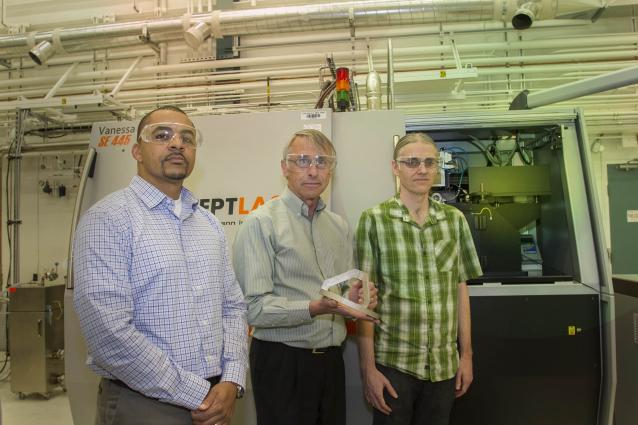 In an ideal system, different layers would demand different laser scanning speeds and powers because the powder environment is changing as the layer-by-layer buildup proceeds.

"Commercial SLM machines do not permit access to specific process parameter information and tool paths," said Bill Carter, a researcher with GE’s Additive Manufacturing Lab, which is under GE’s Global Research. "This limits the ability of researchers to perform controlled validation experiments that support modeling work and process development. The cooperation of GE and LLNL will result in a demonstration of the new protocol on several research machines, paving the way for more robust process control and optimization strategies."

Matthews said: "If you were able to process a 3D part by telling the machine what are the right laser parameters for optimizing the heating and melting for each layer, then the overall manufacturing process can be made more robust and efficient."

Leveraging the capabilities of Lawrence Livermore’s High Performance Computing and its expertise in lasers, Matthews and his GE colleagues are developing software algorithms that will be compatible with all 3D printers that produce metal parts. This software will be able to control the scan laser’s parameters — such as beam size, scan rate and power — on the materials, its powder characteristics and the detailed shape of the part being printed.

"There are a number of SLM machines out there," Matthews said. "But there isn’t a common software that allows them to produce standard parts that are consistent in terms of material properties."

Because the software will be available to the public, Matthews hopes it will lead to more breakthroughs in the AM industry.

"If we can lower the barriers to entry, we can help U.S. companies, universities and research labs make further advances in additive manufacturing," he said.

GE and LLNL are tasked by America Makes to develop the software algorithms in the next 18 months. LLNL researcher Gabe Guss is also working with GE and Matthews on the project.