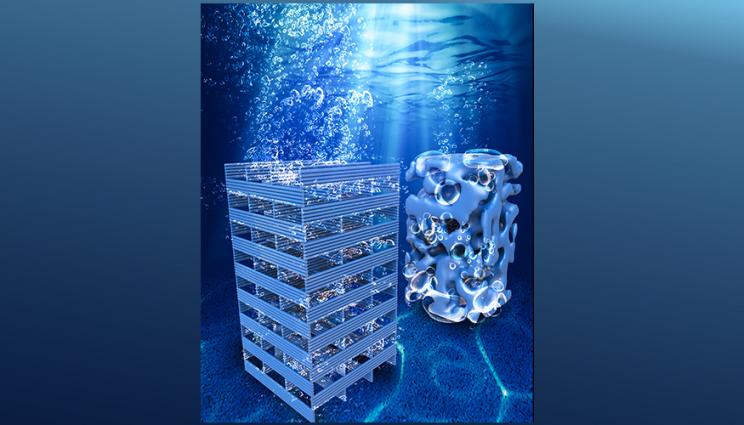 Alkaline water electrolysis has been touted as a path to establish a hydrogen economy by converting intermittent renewable energies into clean hydrogen-based chemical energy.

However, current technology has achieved only low current densities and voltage efficiencies.

To make electrolysis more resourceful, a Lawrence Livermore National Laboratory (LLNL) team partnered with the University of California, Santa Cruz and two other institutions to develop a 3D-printed electrode that lessens the problems that occur with gas bubbles that are generated in the process.

One key to making electrolysis achieve higher current density comes down to the gas bubbles created in the process. The bubbles often mingle together, jam and get trapped, making it difficult for them to escape.

“This new electrode gets rid of the gas bubbles faster. You don’t want the bubbles to be trapped in the material; you want to be able to pull them out as quickly as possible and use them as a fuel source,” said LLNL materials scientist Cheng Zhu, the lead LLNL author of a paper appearing in Advanced Energy Materials.

The unique 3D-printed architecture of the new electrode suppressed gas bubble coalescence, jamming and trapping, and resulted in rapid bubble release. The team found that the current density was 50 times better than the laboratory standard.

The team also used simulations to figure out how the gas forms, how it escapes and the rate at which it escapes. Because you can’t see this process inside of an electrode, the simulations were critical in the design.

“The modeling helped us figure out the fundamental science of the phenomena we saw happening,” said Rongpei Shi, the LLNL materials scientist who conducted the simulations. “The electrodes are not transparent so you can’t look in there and see what’s going on. The controlled platform and modeling are fairly unprecedented to find out about the physics going on inside the electrode.”

The work demonstrates a new approach to the design of 3D electrodes to enable rapid bubble transport and release to enhance the total electrode catalytic activity at commercially relevant current densities.

“There has been a lot of work done on the material end of electrolysis, looking for electrode catalyst materials. What this team showed is that the actual architecture of the components matter just as much, especially at high production rates,” said Brandon Wood, LLNL’s associate program leader for Hydrogen and Computational Energy Materials in the Materials Science Division and a co-author of the paper.

The LLNL portion of the work was funded by the Laboratory Directed Research and Development program.