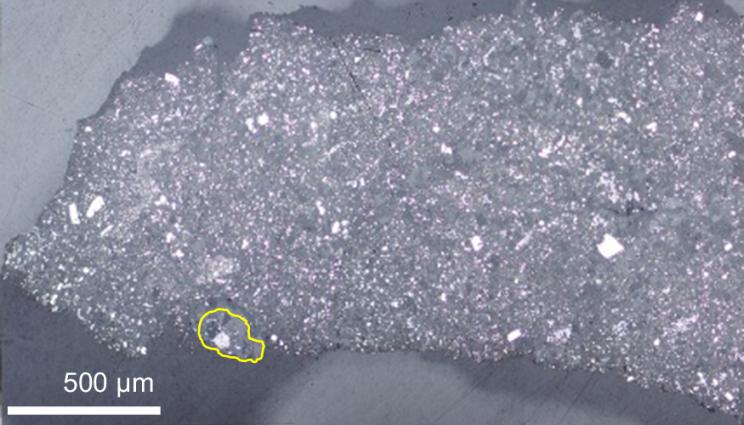 An image of particle A0037, a carbonate-rich fragment from asteroid Ryugu, taken with an optical microscope. This fragment has a much higher abundance of carbonate (~21 vol%) compared to other Ryugu particles or CI chondrites (<3 vol%) that have been examined so far. Circled in yellow is a location of a large carbonate grain enclosing many small magnetite crystals (white dots). Photo courtesy of A. Yamaguchi/NIPR, Japan.

Samples from asteroid Ryugu returned by the Hayabusa2 mission contain evidence of extensive alteration by water and appear related to CI chondrites, which are believed to best represent the bulk of the solar system composition.

Lawrence Livermore National Laboratory (LLNL) scientists in collaboration with an international team looked at the isotopic composition of oxygen, carbon and manganese-chromium in two Ryugu particles to help determine the source of the water and timing of the chemical reactions occurring during the alteration processes. The research appears in Nature.

The fluid was initially between 0-20 degrees Celsius and enriched in 13C, and 17O and 18O and evolved toward lighter carbon and oxygen isotopic compositions as alteration proceeded.

“Carbonate ages show that this fluid-rock interaction took place within the first ~1.8 million years of solar system history,” said LLNL cosmochemist and a co-author of the paper Ming-Chang Liu. “This required early accretion either in a planetesimal less than ~20 km in diameter or within a larger body, which was disrupted and reassembled.”

Because Ryugu is a uniquely pristine sample without terrestrial contamination, bulk-rock measurements of Ryugu can establish genetic relationships to planetary bodies and refine the accretion history of the terrestrial planets. Ryugu is closely related to chemically primitive CI chondrites, stony (non-metallic) meteorites that have not been modified, by either melting or differentiation of the parent body.

The team found that water alteration products such as magnetite and carbonate record information about the fluid from which they form. Isotopic measurements of these components can be used to constrain the timing and characteristics of aqueous alteration of Ryugu materials.

Though Ryugu samples are similar to CI chondrites, the latter have been exposed to various degrees of terrestrial alteration, which appear to have affected the bulk oxygen isotopic compositions.

The LLNL portion of the research was funded by NASA.