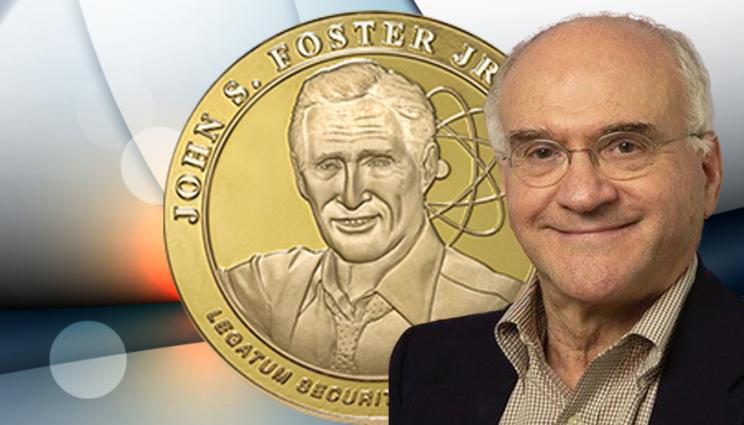 Victor Reis is the third recipient of the John S. Foster Jr. Medal, recognizing his exceptional leadership in scientific, technical and engineering development and policy formulation in support of U.S. nuclear security.

For more than 50 years, Victor Reis has dedicated his career to advancing science and technology in support of U.S. national security. In recognition of his outstanding leadership and service to the nation, he has been named the third recipient of the John S. Foster Jr. Medal.

Established by Lawrence Livermore National Security, LLC (LLNS) and bestowed on an annual basis by the director of Lawrence Livermore National Laboratory (LLNL), the medal recognizes an individual for exceptional leadership in scientific, technical and engineering development and policy formulation in support of U.S. nuclear security. Instituted in 2015, the inaugural recipient was namesake John S. Foster Jr. The 2016 honoree was Gen. Larry D. Welch (retired).

"Johnny Foster and Larry Welch are national security giants," Reis said. "They have served our country with great distinction for many years and continue to do so. It has been my good fortune to have worked with them both, and it is an exceptional honor to be associated with them through Lawrence Livermore’s John S. Foster Jr. Medal. It doesn’t get any better than that." 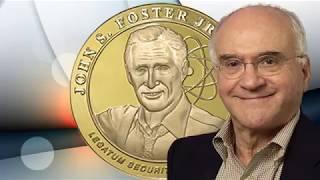 "It would be difficult to overstate the impact that Vic Reis has had on national security and the nuclear complex," said LLNL Director Bill Goldstein. "Today, the U.S. nuclear deterrent remains safe, secure and reliable, owing in large part to his efforts to implement and champion the Stockpile Stewardship Program (SSP). Reis truly exemplifies the meaning of the Foster Medal."

The SSP was formally established by the 1994 National Defense Authorization Act. After the U.S. moratorium on nuclear testing in 1992, Reis was among the first to recognize the need for a new, formal program to maintain the U.S. nuclear stockpile, replacing data formerly obtained by testing with supercomputer simulation and multi-scale experiments. The SSP led to the creation of several new generations of supercomputers – several of which have been housed at LLNL --  the National Ignition Facility and other unique facilities.

Reis graduated from Rensselaer Polytechnic Institute with a bachelor’s degree in 1957. He earned a master’s at Yale University in 1958 and a Ph.D. from Princeton University in 1962. He began his career as a ballistic range experimentalist at NASA Ames Laboratory, then moved to ballistic missile defense and other national security issues at the General Motors Defense Laboratory, Avco Everett Research Laboratory and Concord Research Corporation. From 1973 to 1981, Reis was a senior staff member at Massachusetts Institute of Technology's Lincoln Laboratory, where he provided analyses to the science and technology leadership within the Defense Department and the Department of Energy (DOE).

He served as assistant director for National Security and Space in the Office of Science and Technology Policy in the Executive Office of the President from 1981-1983, where he led policy initiatives on space, aviation and strategic S&T policy. Leaving government, he became senior vice president for strategic planning at the Science Applications International Corp. from 1983-1989, also serving as a member of the Director of Central Intelligence S&T Advisory Panel, the NASA Earth System Science Task Force,  chaired the U.S. Navy Advanced Systems Panel and participated in Defense Science Board Studies and Task Forces.

He rejoined the government that year as deputy director of the Defense Advanced Research Projects Agency. He served as the agency’s director from 1989-1991 and then was named director of Defense Research and Engineering at the U.S. Department of Defense and chairman of the Nuclear Weapons Council, where he served until 1993. As DDR&E, he directed the first post-Cold War strategic plan for the Department of Defense S&T enterprise.

From 1993-1999, Reis served as assistant secretary for Defense Programs in DOE. It was his work in this role that has defined his legacy as the architect and original sponsor of the DOE’s science-based Stockpile Stewardship Program and its associated Accelerated Strategic Computing Initiative (ASCI), which resulted in the creation of several new generations of government-sponsored supercomputers. As part of the effort, he led the U.S. nuclear weapons technical delegation supporting the Comprehensive Test Ban Treaty to the United Kingdom, France and Russia.

From 1999-2005, Reis was senior vice president of Hicks & Associates Inc. and also served on the Argonne National Laboratory Board of Governors and advisory groups for Sandia, Los Alamos, Livermore and Idaho national laboratories, plus the Strategic Advisory Group of the U.S. Strategic Command and the NNSA Capabilities Panel.

Returning to the DOE in 2005, Reis served as senior adviser in the Office of the Secretary and Undersecretaries, leading task forces on nuclear energy, nonproliferation, a review of stockpile stewardship and the DOE’s nuclear strategic planning. He retired from DOE in March 2017.

He is the recipient of two Department of Defense Distinguished Public Service Medals, the Department of Energy James R. Schlesinger Award and an honorary medal from the Commissariat a L’energie Atomique.

Reis will receive the John S. Foster, Jr. Medal at a ceremony this fall.