If you have questions about the John S. Foster, Jr. Medal, please send an email fostermedal [at] llnl.govclass="spamspan".

The John S. Foster, Jr. Medal is administered by Lawrence Livermore National Security, LLC (LLNS) to commemorate the exceptional and inspirational career of Dr. John S. Foster, Jr. The medal is bestowed annually by the Director of Lawrence Livermore National Laboratory (LLNL) on behalf of LLNS to an individual who has demonstrated exceptional leadership in science, technology, and engineering or policy formulation in support of U.S. nuclear security. Medal recipients receive a citation, a gold medal bearing the likeness of John S. Foster, Jr., and a $25,000 cash award. 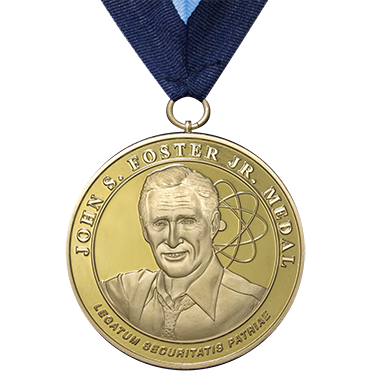 This medal was established to recognize innovative and inspirational leadership in providing a safe, secure, and effective nuclear deterrent to ensure international peace and strategic stability. Nominees are expected to have displayed the same qualities that have distinguished John S. Foster, Jr. throughout his career: strong national security and programmatic focus, inspiring leadership and team-building mentorship, scientific innovation, and keen judgment and integrity.

The deadline to submit nominations has passed.

The nomination package should consist of a letter of nomination (including contact information for three references who may be asked for further input), and a curriculum vitae or biography listing significant accomplishments. The nomination letter should make clear the candidate’s major achievements and the resulting impacts in the context of the assessment criteria.

The John S. Foster, Jr. Medal is given for outstanding contributions and achievements that demonstrate scientific, technical, management, or policy leadership related to enhancing the nation's nuclear deterrent. Such contributions and achievements must have lasting influence, reflecting the attributes of Dr. Foster's many accomplishments and the qualities that distinguish his remarkable career. The nominees will be assessed using the following criteria:

Achievements: Demonstrating innovation and professional excellence in the evolution of nuclear forces and nuclear strategy through advancing science and technology, developing and deploying new capabilities, and formulating nuclear policy. Inspiring leadership and building teams in the national interest: formulating and guiding the direction of nuclear policy; developing and deploying new capabilities to enhance the safety, security, and effectiveness of the nuclear deterrent; and assembling multidisciplinary teams or integrating disparate points of views to forge an effective combination of nuclear forces, arms control and verification measures, and nuclear deterrence policy.

Character: Motivated and able to motivate others to do their best: identifying and focusing on difficult problems and emerging threats to the nation; taking on difficult scientific and technical challenges; assembling effective multidisciplinary teams; and inspiring and mentoring others to contribute more than they thought possible.

Keen judgment and rigor: Consistently using a strong technical basis as the starting point for discussions, articulating persuasive arguments based on sound analysis of alternatives and their consequences, and always questioning assumptions and asking what can go wrong. Grace, honesty, integrity: working constructively with others, promoting teamwork and helping people work to agreement on difficult issues, and generously supporting the aspirations of all.

The nomination materials will be evaluated by an independent peer review panel to be selected by the LLNL Director. The panel will include members from the National Nuclear Security Administration’s national laboratories and the broader national security community. Worthy candidates will be identified in the peer review, and a selection recommendation will be forwarded to the LLNL Director, who will make the final decision on behalf of LLNS. The medal will be presented at an event with appropriate media coverage.

Air Force Gen. Larry D. Welch became the second recipient of the Foster, Medal, as announced on September 1, 2016. Welch received the award September 26 at a ceremony at CSIS. Welch served as commander in chief of the Strategic Air Command from 1985-86, and as the 12th chief of staff of the U.S. Air Force from 1986 to 1990. In this position, he was one of the principal military advisers to the secretary of defense, the National Security Council, and the president.

Victor "Vic" Reis, former Department of Energy's assistant secretary of Defense Programs, was the third recipient. Announced on August 8, 2017, Reis received his award on November 3 at a ceremony at Lawrence Livermore National Laboratory. Previous Medal winners Foster, Jr. and Welch were in attendance. From 1993-1999, Reis served as assistant secretary for Defense Programs in DOE, during which time he was the architect and original sponsor of the DOE’s science-based Stockpile Stewardship Program and its associated Accelerated Strategic Computing Initiative.

The fourth recipient of the Foster Medal was former LLNL Director John Nuckolls. Announced August 8, 2018, Nuckolls received the award November 8 at a Laboratory ceremony. Previous Medal winners Foster, Jr. and Welch were in attendance. Nuckolls is best known as the seventh director of the Laboratory, the driving force behind the birth of the laser program at LLNL and as one of the most innovative thermonuclear designers of the atmospheric test era.

Lab Director Emeritus George Miller was named the sixth recipient of the Foster medal in September of 2021 for his contributions to U.S. national security. Miller served as Laboratory director from 2006 to 2011, first under the management of the University of California. In 2007, he also was named Lawrence Livermore National Security (LLNS) president when NNSA awarded the contract to manage LLNL to LLNS. As the first president and director under the LLNS contract, Miller guided the Laboratory through transition to a new management system while pursuing the Lab's programs and science in the national interest.