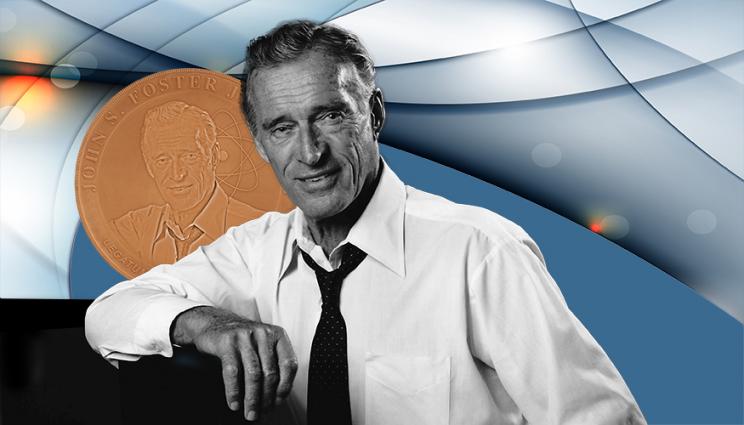 LIVERMORE, California – John S. Foster Jr. has long been known for his exceptional service to the nation and his legacy of teamwork, innovation, leadership and scientific and technical excellence.

On Sept. 29, at the Center for International and Strategic Studies (CSIS), the national security community came together to honor Foster as he became the first recipient of the John S. Foster Jr. Medal. Established by Lawrence Livermore National Security, LLC (LLNS) and bestowed on an annual basis by the director of Lawrence Livermore National Laboratory (LLNL), the medal recognizes an individual for exceptional leadership in scientific, technical and engineering development and policy formulation in support of U.S. nuclear security objectives. 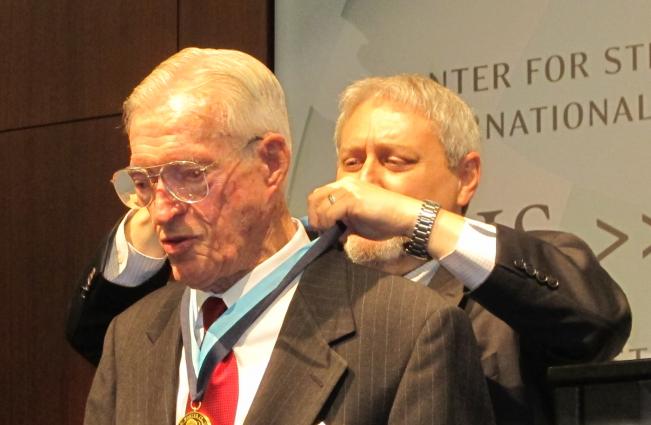 "This medal is intended to honor those who have made significant contributions to nuclear security through individual efforts, team building and leadership," said Bill Goldstein, director of Lawrence Livermore National Laboratory. "The Foster Medal highlights the quality and dedication of individuals engaged in nuclear security work and the unique, crucial role of nuclear weapons in our nation's security. I can think of no better person to receive this inaugural award than the man for whom it was named."

During the event, several speakers highlighted events from Foster’s career and his many contributions to the nation. Speakers included Ernest Moniz, secretary of Energy; Frank Klotz, administrator for the National Nuclear Security Administration (NNSA); Jon Kyl, former U.S. senator for Arizona; and Ellen Tauscher, former under secretary of State for Arms Control and International Security Affairs and U.S. representative for California.

In addition, a panel chaired by John Hamre, president of CSIS and former deputy secretary of Defense, discussed the topic "Future of the Nuclear Enterprise." Panel members included Michael Anastasio, former director of Lawrence Livermore and Los Alamos national laboratories; Linton Brooks, former under secretary of Energy for Nuclear Security and administrator of the NNSA; Charles Curtis, former under secretary and deputy secretary of the Department of Energy; Miriam John, former vice president of Sandia California and board member of the Department of Defense Science Board; and Larry Welch, former chief of staff of the U.S. Air Force.

Foster began his career of national service when, during World War II, he left college to become an expert on radar and countermeasures at the Radio Research Laboratory at Harvard. He spent a year in the Mediterranean with the 15th Army Air Force as a scientific adviser on the subject, where he examined and operated German equipment to figure out how they were shooting down aircraft, devised an effective countermeasure and saved the lives of many American aviators.

After the war, Foster continued his education at the University of California, Berkeley. As a graduate student, he was profoundly influenced by professor Ernest  Lawrence and his way of managing the UC Radiation Laboratory as "one big family." After earning his degree, Foster joined the newly formed laboratory in Livermore, now LLNL. He embraced Lawrence's emphasis on pursuing technically challenging, large-scale projects to meet highly important national needs and providing a work environment conducive to team science without an imposed formal organization structure.

At LLNL, Foster led team efforts that made a major breakthrough in nuclear weapon design that is the basis for all modern U.S. nuclear weapons. He also recognized the need and spearheaded early efforts to improve weapon safety and include security features in deployed nuclear weapons. 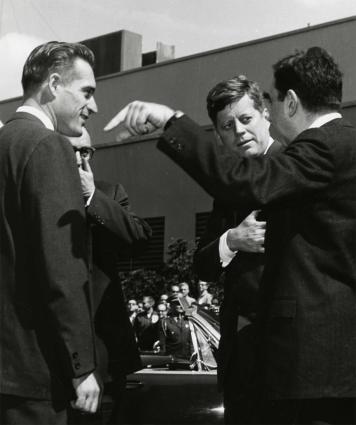 His technical successes and leadership capabilities positioned him to be named LLNL director in 1965. In this role, he saw the need for Livermore to expand its national security responsibilities to meet existing and emerging needs. For example, Foster established a formal relationship with the intelligence community and formed Z Division at the Laboratory to analyze and understand the Soviet threat and develop innovative technologies for intelligence agencies.

In addition, with Livermore's development of special effects weapons and the Plowshare Program for peaceful use of nuclear explosives, he established a biomedical division, which cast attention on radiation damage at the cellular level and, over time, led to the Human Genome Project and development of DNA analysis systems for biosecurity and human health applications. Research programs also began on laser technologies for inertial confinement fusion.

National service then called Foster to Washington, D.C., where he became director of Defense Research and Engineering for the Department of Defense, serving for eight years under presidents Lyndon B. Johnson and Richard Nixon.

In 1973, he left Washington to become a vice president of TRW Inc. There, he led the company's program to develop new technical applications for providing energy, later served as TRW's officer for Science and Technology and joined the board of directors. While at TRW — and since his retirement in 1988 — Foster served on many defense-related advisory committees and task forces. In particular, he was a member of the Defense Science Board for more than three decades, served on the President’s Foreign Intelligence Advisory Board and was a member of the recent Congressional Commission on the Strategic Posture of the United States. 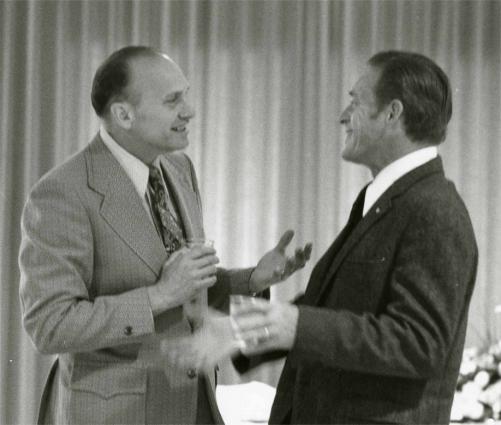