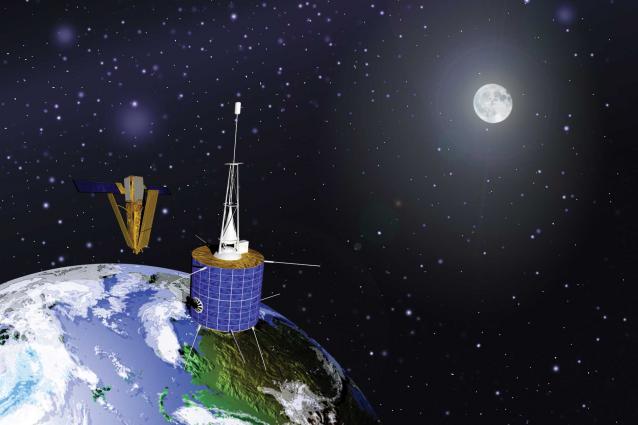 On Feb. 10, 2009, a  defunct Russian satellite, right, and a privately owned American communications satellite, left, collided near the North Pole, producing clouds of debris that quickly joined the orbital parade, increasing the possibility of future accidents.

Each day, hundreds of active satellites as well as tens of thousands of pieces of "space junk" -- defunct satellites, bits of booster rockets and lost astronaut tools -- orbit Earth.

This space junk became front page news two years ago, when a defunct Russian satellite and a privately owned American communications satellite collided near the North Pole. The incident produced clouds of debris that quickly joined the orbital junk parade, increasing the possibility of future accidents.

Add to that the 80 countries that have joined the space community, and it would appear that space -- at least what's located immediately outside of Earth -- is getting a little short on space.

Scientists have long been aware of the potential for a close encounter between satellites before the Russian-U.S. accident. But the difficulty of precisely predicting orbital paths made a definitive prediction of the collision impossible.

Help is on the way. Lawrence Livermore, in collaboration with Los Alamos and Sandia national laboratories and the Air Force Research Laboratory, is working to improve the nation's capabilities for detecting and monitoring threats to U.S. space operations.

Since early 2008, a team of computational physics and engineering experts at Livermore has been designing a comprehensive set of analysis, modeling, simulation and visualization tools that together are called the Testbed for Space Situational Awareness (TESSA). The work stems from the Lab's longtime investment in advanced supercomputing capabilities necessary to perform its national security missions, as part the National Nuclear Security Administration's Advanced Simulaton and Computing Program.

TESSA simulates the positions of objects in orbit and the detection of them by telescope and radar systems. Initial goals of the collaborative project are to provide a high-fidelity model of the Air Force's Space Surveillance Network (SSN), which is tasked with knowing the location of objects orbiting Earth, and to enable a more accurate assessment of whether any orbiting objects pose a threat to any active satellites.

In addition to enhanced space situational awareness, such a simulation system could in the future be used to help plan sensor operations and assess the benefits of specific sensor systems, technologies, and data analysis techniques.

An impetus for improved space situational awareness was a 2007 event in which China shot one of its own defunct satellites. "The incident not only reinforced the vulnerability of satellites in space but also revealed the need for a better understanding of debris dispersion following a high-velocity collision," says Livermore physicist Scot Olivier, who leads the TESSA effort.

An object the size of one's thumb could inflict massive damage on impact when moving at hypervelocity -- several kilometers per second or more. Damage to an active satellite could have far-reaching repercussions.

Orbiting satellites are vital links in worldwide data, voice and video communication systems. Some satellites help to connect people in remote regions and others help to navigate ships, aircraft and land vehicles. Satellites also help to advance scientific studies by providing data critical for Earth, marine and atmospheric science research. The primary function of about one quarter of all satellites is to support defense systems for countries around the globe.

SSN maintains telescope and radar systems to track and catalog objects detected in Earth's orbit. Radar systems track most objects in low Earth orbit, from 200 to 1,000 kilometers above Earth, while ground-based telescopes primarily monitor satellites in geosynchronous Earth orbit, nearly 36,000 kilometers above Earth. SSN can track objects about the size of a softball, or 10 centimeters in diameter, in low Earth orbit and objects about the size of a basketball in the higher geosynchronous orbit. A U.S. surveillance network has been in place since the former Soviet Union launched Sputnik, the world's first satellite, into space in 1957.

With TESSA, the Laboratory is improving the capability to analyze the performance of SSN's imaging and detection systems and assess the relative efficacy of new configurations and methods.

Livermore has committed Laboratory Directed Research and Development funding as well as other sources of internal funding to implement TESSA, which exploits the Laboratory's expertise in high-performance computing; optical and radio-frequency phenomenology and instrumentation; and the physics of hypervelocity impacts. More recently, the TESSA project has attracted funding from external sponsors, through the efforts of Olivier and Global Security Directorate deputy program director Dave Dye, who is responsible for program development initiatives. Physicist Alex Pertica is project manager and chiefly responsible for project execution.