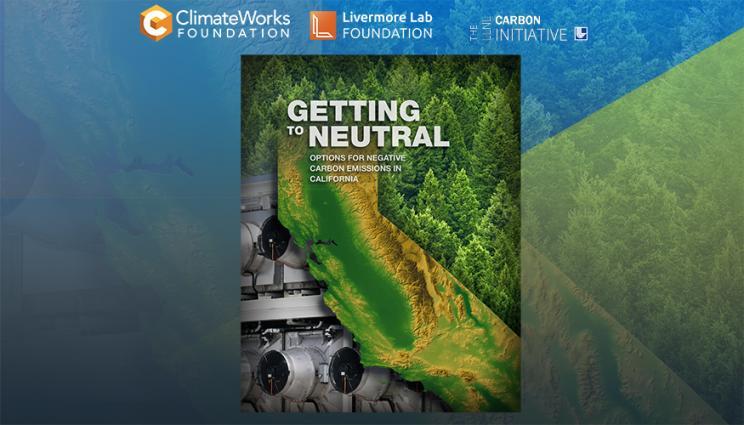 One year after publishing the groundbreaking "Getting to Neutral: Options for Negative Carbon Emissions in California," Lawrence Livermore National Laboratory (LLNL) has become a trusted adviser in the discussion of how to remove carbon dioxide from the air.

In the report, LLNL scientists identified a robust suite of technologies to help California clear the last hurdle and become carbon neutral — and ultimately carbon negative — by 2045. The Lab’s role in connecting industries, government agencies and interest groups has blossomed after the report, reflecting the group’s principle of including (and encouraging) all forms of carbon dioxide removal.

“Our broadly inclusive approach in 'Getting to Neutral' keeps everyone in the discussion and makes us a go-to resource for all options,” said Roger Aines, lead of the project and one of the authors. “We are one of the very few organizations who are not pushing a particular technology, but rather an overall outcome.”

LLNL recognizes that major changes in the state’s economy and energy systems will affect all Californians, and researchers have sought out the advice of environmental and social organizations to understand how best to meet both the climate and social needs of the state.

Not only has the report — funded by the Livermore Lab Foundation — gained attention by state legislators and industry, it has reached out worldwide.

The world is moving toward carbon-neutral economies. The Japanese Innovation for Cool Earth Forum, sponsored by their energy agency METI, commissioned a report by Columbia University, LLNL and several of the "Getting to Neutral" authors, called "ICEF 2020 Roadmap: Biomass Carbon Removal and Storage (BiCRS)." The report provides a roadmap for how biomass can be used globally for removing carbon from the air.

While "Getting to Neutral" originally focused on California reaching carbon neutrality, Aines said the same strategies can be applied to other states and the world as a whole. “From Japan to Finland, and all over the United States, LLNL is recognized as a leader in carbon removal, and our advocacy for all varieties of appropriate carbon removal technologies is speeding up the point at which the world can remove the 10 billion tons of CO2 needed per year by 2050,” he said.

At the national level, the Biden administration is committed to net carbon neutrality and reached out to LLNL during the transition to get advice and discuss options for significant acceleration of getting U.S. industries to net zero. The "Getting to Neutral" team was acknowledged by the Secretary of Energy for achieving one of the notable accomplishments of 2020, and the team was given the Secretary of Energy Achievement Honor Award, one of the Department of Energy’s highest forms of internal employee recognition. The "Getting to Neutral" report set the stage for several key reports on net neutrality, including the Princeton report "Net-Zero America," which showed that the same approaches useful in California can be used to get the United States to net neutral by 2050.

At the state level, the state of California has similarly sought LLNL’s advice on how they can move their carbon management plans forward. Authors have briefed state agencies and officials 19 times, and state legislators and staff 12 times. The LLNL team is coordinating closely with the California Air Resources Board (CARB) as they formulate their plan for net carbon neutrality by 2045. CARB’s November 2020 presentation to their board outlines for the first time a clear need for carbon capture and sequestration and carbon removal to achieve 2045 state climate goals.

“It is inspiring to see how many organizations see hope in our description of how California can reach net neutral,” Aines said. “The conversation is robust, and the number of people willing to act makes us hopeful that the climate crisis can be solved.”

In the analysis of all the ways to remove CO2 from the air, the report showed that natural solutions are an important but small part of California’s options. “Much more is needed beyond natural solutions — we need both to succeed,” Aines said.

Biomass has a big role in achieving carbon neutrality. Waste biomass can remove CO2 from the air and future development should focus on carbon removal from biomass that is already being burned, landfilled or allowed to rot.

In addition, converting biomass to hydrogen gets the most CO2 underground and produces a valuable zero-emissions fuel. The combination makes this the most cost-effective CO2 removal solution at large scale for California. Hydrogen has not been combined with biomass in most models — it is now recognized as a key option.

And business is getting on board. One of the biggest outcomes of "Getting to Neutral" has been the outreach from industries who want to know how they can reach carbon neutrality. “ 'Getting to Neutral' was a catalyst for action,” Aines said. “As the only report to consider specific technologies at county-by-county sites, industry recognizes that we have the knowledge and balanced expertise to help them meet their goals.” Since the report came out, LLNL researchers have been contacted by 50 businesses, organizations and NGOs seeking to understand how they can expand their role in carbon neutrality.

"There is increased interest on the part of grant makers and foundations to fund opportunities in climate research, carbon neutrality and the technologies that will make it happen," said Dona Crawford, board chair of the Livermore Lab Foundation. "We're delighted to be able to showcase the Lab's leadership efforts in this area, as well as continue to showcase how LLNL is contributing daily to science in the national interest."

In an effort to gain insight into the report, a special virtual forum presented by LLNL, the Livermore Lab Foundation and the California Council on Science and Technology will take place March 3. The “Carbon Capture and Sequestration in California Regional Insights and Community Attitudes” symposium will feature local, state and industry speakers who will discuss the headway that has been made one year after the "Getting to Neutral" report was released.

"Getting to Neutral" is helping California’s geological storage plans gain steam. The report’s detailed specificity was particularly helpful to groups considering building geologic storage sites in California. After the report was released, nine groups have contacted LLNL for consultation on that goal. Five of those sites are making serious plans to move forward.

“By including all technologies and not picking winners, we showed that we are willing to work to make many pathways succeed,” Aines said. “The result has been dozens of partnerships, large and small, with groups interested in making the atmosphere cleaner and the climate more friendly."