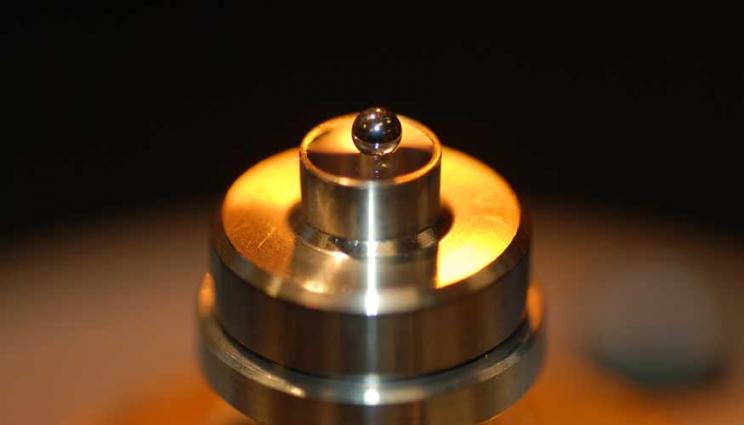 A stainless steel ball is supported by a thin sheet of plastic about 200 atoms thick. The plastic sheet was produced using a technology known as Polyelectrolyte Enabled Liftoff (PEEL), which was developed by LLNL researchers and General Atomics. The technology is the recipient of an R&D 100 award.

The trade journal R&D Magazine announced the winners of its annual awards, sometimes called the "Oscars of invention," Thursday at the Gaylord Convention Center in Washington, D.C. With this year’s results, the Laboratory has now captured a total of 158 R&D awards since 1978. 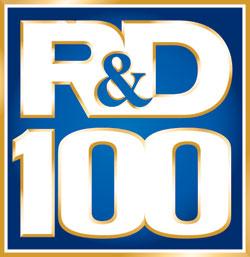 This year’s winners are the GLO Transparent Ceramic Scintillator, a technology that provides much faster imaging of metal parts; the Polyelectrolyte Enabled Liftoff (PEEL) technology, a method of fabricating freestanding polymer films; and for a suite of computational tools that help businesses develop carbon capture technology.

One of LLNL’s three R&D 100 awards – for the PEEL technology – received internal "seed money" from the Laboratory Directed Research and Development (LDRD) Program. This funding enables the undertaking of high-risk, potentially high-payoff projects at the forefront of science and technology.

"This recognition in the R&D 100 competition is a great tribute to the innovative spirit of our scientists and engineers" said Lab Director Bill Goldstein. "Teaming with industrial collaborators is an important element in ensuring that technologies developed here will be of benefit to the nation." 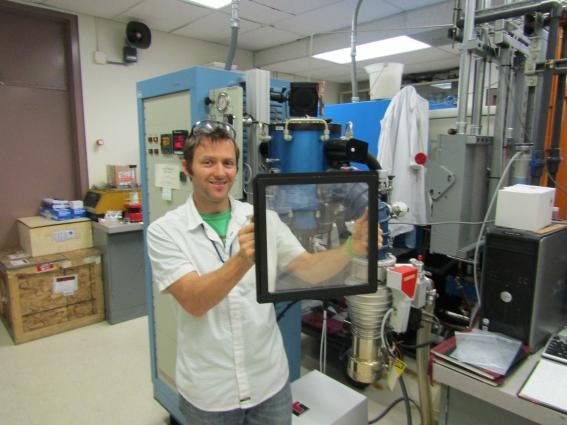 Mega-electron-volt radiography is the most effective method for looking inside large, high-density cast metal parts like power plant turbines and complex metal assemblies such as jet engines, as well as for identifying defects in welds, for example, during shipbuilding.

In addition, it can be used to nondestructively image the 3D volume of complex objects.

Developed for the Laboratory’s Weapons and Complex Integration Directorate, the scintillator was produced in collaboration with industrial partners Nanocerox of Ann Arbor, Michigan; Technology Assessment and Transfer of Millersville, Maryland, and American Isostatic Presses of Columbus, Ohio.

A way to fabricate polymer films

Known as the Polyelectrolyte Enabled Liftoff (PEEL) technology, this advance is a robust, scalable method of fabricating freestanding polymer films that are larger, stronger and thinner than conventional methods can produce.

PEEL is used at the Laboratory’s National Ignition Facility for the daily fabrication of membranes as thin as 30 nanometers that serve as compliant, load-bearing elements for laser targets.

With the new PEEL process, very thin films can be directly delaminated from their deposition substrates over very large areas. PEEL eliminates the need for often-used sacrificial interlayers, which can negatively impact the properties of the final freestanding film, and are difficult to scale in quantity and size. PEEL allows, for the first time, the remarkable properties of polymers such as polyvinyl fluoride (PVF) to be exploited in vanishingly thin films.

Because the process is easily scalable in size and manufacturing quantity, it could eventually be applied to sensing, catalysis, filtration and wound-healing applications. The work was done in collaboration with San Diego-based General Atomics.

Now in its fourth generation, the Carbon Capture Simulation Initiative (CCSI) toolkit consists of a suite of computational tools and models to accelerate the development of carbon capture technology for manufacturers and businesses.

Launched in 2011, the CCSI’s objectives are to develop, demonstrate and deploy advanced computational tools and validated multi-scale, multi-physics models. Its mission is to reduce the risk and time required to develop and scale up new carbon capture and related chemical process technologies.

It has been developed by four national labs – LLNL, Lawrence Berkeley, Los Alamos and Pacific Northwest  – and five universities – Carnegie Mellon, West Virginia, Princeton, Boston and the University of Texas at Austin.