Livermore Graduate Scholar and chemist Fanny Chu is part of a team that found that any single hair from anywhere on the human body can be used to identify a person. The team’s study could provide an important new avenue of evidence for law enforcement authorities in sexual assault cases. Photos by Julie Russell/LLNL.

Any single hair from anywhere on the human body can be used to identify a person.

This conclusion is one of the key findings from a nearly year-long study by a team of researchers from Lawrence Livermore National Laboratory’s (LLNL) Forensic Science Center (FSC) and Michigan State University.

The team’s study, published in Scientific Reports, a journal of Nature Magazine, could provide an important new avenue of evidence for law enforcement authorities in sexual assault cases

In 2016, FSC scientists developed the first-ever biological identification method that exploits the information encoded in the proteins of human hair from people’s heads. This forensic science breakthrough provides a second science-based, statistically validated way to identify people and link individuals to evidence in addition to DNA profiling.

"This new paper focuses on elucidating more of the hair protein chemistry and its effects on the protein marker identification," said chemist Fanny Chu, the paper’s lead author, a graduate student at Michigan State University and a Livermore Graduate Scholar, a program that allows Ph.D. students to work on their thesis at LLNL.

"We’ve already shown that we can use human hair from people’s heads for identifying people. Now the question arises: Can you get the same identification information from hair in other body locations?

It is anticipated by the LLNL-Michigan State team that the "real relevance" of their research could come in helping law enforcement authorities investigate sexual assault cases, said paper co-author and FSC chemist Deon Anex.

"Pubic hair from an assailant can often be found during an examination of a sexual assault victim. Because of this research, the analysis of protein identification markers in such pubic hair could someday be used as evidence in criminal cases," Anex said.

Based on the protein content of the hairs, the forensic scientists indicated that they also can determine whether an individual hair is from a person’s head, arm or pubic area. 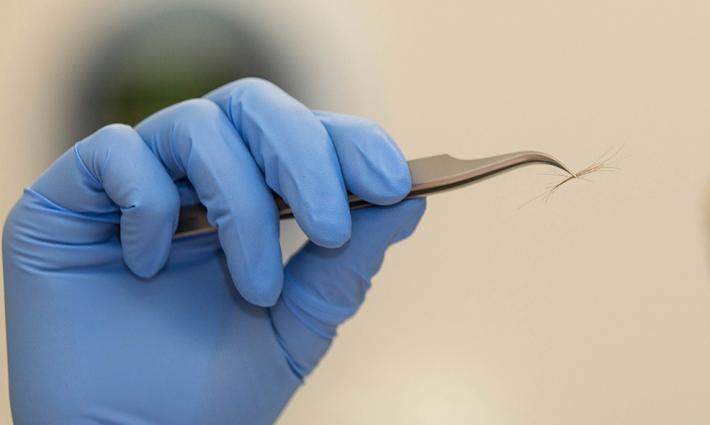 The team discovered that the protein content of pubic hair is significantly higher than head and arm hair, according to Chu, who noted this means more protein markers can be found, making the individual profiles more discriminating.

Through the first few years of the Lab’s research (2013-2016) into using protein markers from human hair to identify people, the researchers used multiple hairs for their samples. They were able to find enough markers to provide a unique pattern for an individual that would distinguish that person among a population of 1 million.

Now, six years after starting their research, the Livermore team can use a single one-inch strand of hair to identify one person from among 10 million people.

"We’ve worked to refine the technique so we could do our analysis with only one human hair, which is more forensically relevant," Anex said. "Our expectation is that with further work, we should be able to achieve the 1 in 10 million identification ratio for single hairs from other body locations, especially pubic hair."

In addition to Chu and Anex, other authors of the Scientific Reports paper are: Katelyn Mason, an FSC chemist; Brad Hart, the former head of the Livermore FSC and now the leader of the Lab’s Intelligence Programs; and A. Daniel Jones, Chu’s thesis adviser and a professor in the Department of Biochemistry and Molecular Biology at Michigan State University.

Research for the Scientific Reports paper was funded through the Livermore Graduate Scholars Program and LLNL’s Laboratory Directed Research and Development program.

In the 2016 announcement that FSC researchers had developed a forensic method to identify people using human hair proteins, they noted that proteins are chemically more robust than nuclear DNA. The method has been able to detect protein markers in human hair more than 250 years old.