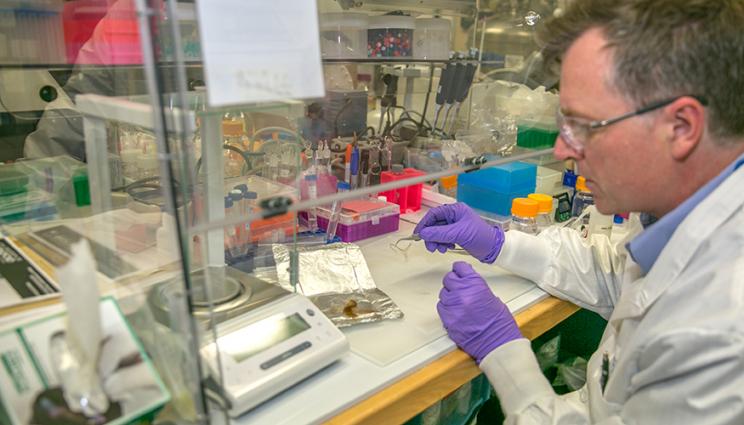 Glendon Parker, a biochemist with Lawrence Livermore National Laboratory’s Forensic Science Center, examines a 250-year-old archaeological hair sample that has been analyzed for human identification using protein markers from the hair. Researchers from LLNL and a Utah startup company have developed the first-ever biological identification method that exploits the information encoded in proteins of human hair. Photos by Julie Russell/LLNL

In an important breakthrough for the forensic science community, researchers have developed the first-ever biological identification method that exploits the information encoded in proteins of human hair.

The new protein identification technique will offer another tool to law enforcement authorities for crime scene investigations and archaeologists, as the method has been able to detect protein in human hair more than 250 years old. 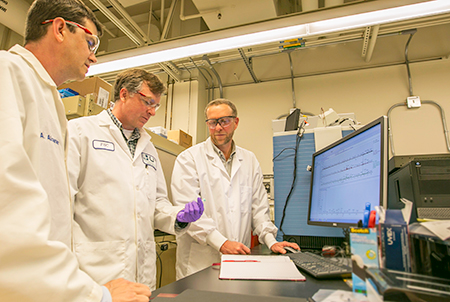 Aim to identify people using only one hair

Once the method is optimized, the researchers believe they could use protein markers from a small number of human hairs, possibly as little as one, to distinguish an individual among the world’s population.

"We are in a very similar place with protein-based identification to where DNA profiling was during the early days of its development," said LLNL chemist Brad Hart, the director of the Lab’s Forensic Science Center and co-author of a paper detailing the work.

"This method will be a game-changer for forensics, and while we’ve made a lot of progress toward proving it, there are steps to go before this new technique will be able to reach its full potential."

The work of LLNL scientists, a researcher with Utah-based Protein-Based Identification Technologies, LLC and other collaborators is described in a paper published today in PLOS ONE, a San Francisco-based peer reviewed online scientific journal. 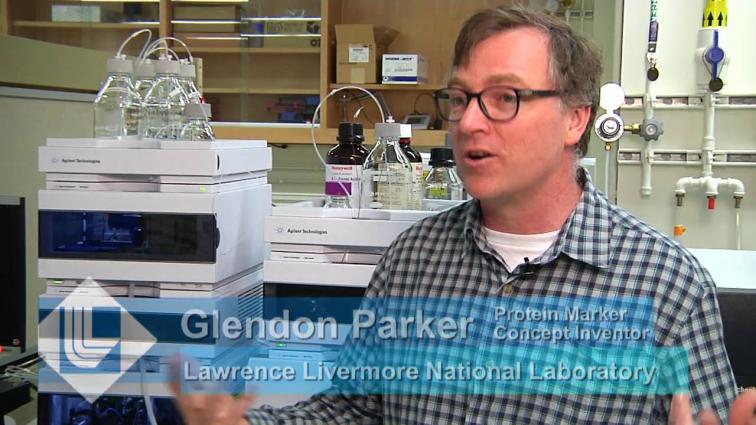 The researchers believe that the number of individual protein markers that can be used to differentiate people could go as high as 1,000. Protein markers also can be found in other tissue types, such as shed skin cells, bones and teeth, and the scientists have started studying how people can be identified using the latter two tissues.

Using their current sample sizes, the researchers are able to find enough markers to provide a unique pattern for an individual that would distinguish that person among a population of 1 million.

The new method, in effect, addresses a 2009 National Research Council report on forensic science that detailed the weaknesses of many current approaches and reported an urgent need for new science-based forensic methods.

"Nuclear DNA is the gold standard for human identification, but it is quite fragile," Hart said. "When the DNA molecule degrades from light, heat exposure or other environmental conditions, it becomes useless for identification."

Proteins are chemically more robust than nuclear DNA. That point was illustrated by the team’s work as the researchers found protein markers in human hair from six skeletal remains taken from cemeteries in the greater London area dating back about 150 to 250 years.

Proteins are long molecular chains formed from amino acids — the basic building blocks of life. DNA is the pattern or template the body uses to produce proteins.

In the research, the protein markers used by the scientists have been variants in the proteins resulting from amino acid substitutions that stem from DNA mutations, and are known as single amino acid polymorphisms (SAPs).

The team’s research kicked into high gear in March 2013 when biochemist Glendon Parker, the inventor of the protein identification concept and then an associate professor at Utah Valley University, came to work at LLNL. Parker is the lead author of the PLOS ONE paper.

"Glendon’s clever invention was to realize that the uniqueness of SAPs could be used to identify individual people, and the robustness of the technique relies on its link back to DNA," said Deon Anex, an LLNL chemist and co-author.

Although people do not inherit proteins, they do inherit the DNA that produces their proteins.

"As a result, there is a link between the protein markers that we find and a person’s DNA. There are two reasons why this is particularly important: the DNA is unique to each individual and it is inherited from a person’s parents," Anex said.

Currently, the sample preparation, instrument run time and analysis period for the protein identification method requires about 2 ½ days, Anex said, noting the team expects the cost to be competitive with other similar technologies.

"The discovery phase has been quite complex, but once the technique is established, we believe it can be made into a routine procedure for use in crime labs."

The researchers are seeking to establish a set of 90-100 protein markers that would be sufficient to distinguish an individual among the world’s population using a single hair.

In addition to Hart, Parker and Anex, other LLNL researchers who have worked on the project are biochemist and postdoc Katelyn Mason, bioinformaticist Marisa Torres and biologists Bonnee Rubinfeld and Cheryl Strout.