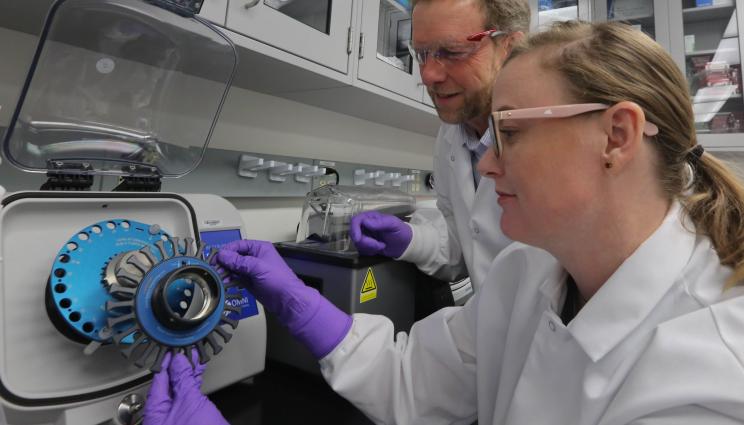 LLNL scientists Katelyn Mason and Deon Anex prepare to pulverize forensic bone samples prior to demineralization and extraction of proteins to find identity markers. In addition to previously demonstrating the use of protein markers from human hair to identify people, the research team is announcing that it has found a second way to use protein markers from human tissue for identification – this time from human bones. Photo by Julie Russell/LLNL.

When a team of researchers led by Lawrence Livermore National Laboratory (LLNL) developed a new biological identification method that exploits information encoded in proteins, they thought it could have multiple applications.

Nearly two years later, they’ve turned out to be right.

In September 2016, LLNL scientists announced they had developed a science-based, statistically validated way to use protein markers from human hair to identify people and link individuals to evidence.

Now they’ve found a second way to use protein markers from human tissue for identification — this time from bones. Their work is described in a paper published online by Forensic Science International, an Amsterdam-based journal.

"One of the most exciting aspects of this research is that it seeks to provide a completely new objective methodology for human identification," said LLNL chemist Brad Hart, the director of LLNL’s Forensic Science Center and a co-author of the paper.

"It is critical that the forensic science community expand the suite of objective tools available that allow for forensic results to be expressed with statistical rigor. Expanding the proteomic approach to include bone tissue promises greater potential for determining the identity of remains recovered from challenging environments and circumstances."

The new protein marker technology addresses a 2009 National Research Council report on forensic science that detailed the weaknesses of many current approaches and reported an urgent need for new science-based forensic methods.

Livermore researchers view the protein marker advance as an additional tool for the forensic science community and a complement to DNA, which is the gold standard for human identification, but fragile in several ways.

"The use of protein markers from human hair and now bones can complement existing techniques based on DNA," said Lab chemist and paper co-author Deon Anex. "It can be especially valuable if DNA is missing or compromised."

Another LLNL team member, biochemist Katelyn Mason, the paper’s lead author, noted: "This is the first manuscript to describe the detection and validation of protein markers from human bones. The results show this approach can provide a powerful new tool for forensic science."

In addition to Hart, Anex and Mason, other co-authors for the paper are Glendon Parker, who previously worked at Livermore and is now an adjunct associate professor in the University of California, Davis’ Environmental Toxicology Department; and Todd Grey, who is retired from the Utah Office of the Medical Examiner.

Using their current sample sizes, the researchers have found enough markers to provide a unique pattern for an individual that would distinguish that person in ranges of from 1 in 6 people to 1 in 42,000 people.

Although rib bone samples were used in the study, it is believed that any type of human bone could be used for identifying people or linking them to evidence.

While Hart sees protein markers from human hair as being markedly more valuable for identifying people or linking them to evidence, the use of bone protein markers could help with human identification in cases where there isn’t other evidence.

"There is inherently less genetic variability in proteins present in bone compared to human hair," Hart said. "For purposes of identifying people or linking them to evidence, hair proteins are more valuable.

"Nonetheless, there are situations where bone tissue may be all that is available and for those cases there may be no other way to the identify human remains."

Consequently, one possible important application for using protein markers from human bones could be to help determine the identity of partial remains from catastrophic events, such as plane crashes, fires or the 9/11 terrorist attacks.

While nuclear DNA has been used by law enforcement for more than three decades and boasts extensive databases, the development of using protein markers from human hair and bones is still in its infancy.

However, researchers can take observed biological markers associated with genetic variation in hair and bone proteins and correlate them to specific DNA mutations in individuals, which could be helpful until protein marker databases are developed.

Currently, the sample preparation, instrument run time and analysis period for the protein identification method requires about 2½ days, Anex said, noting the team expects the costs to be competitive with other similar technologies.

Proteins are long molecular chains formed from amino acids — the basic building blocks of life. DNA is the pattern or template the body uses to produce proteins.

In the research, the protein markers used by the scientists have been variants in the proteins resulting from amino acid substitutions that stem from DNA mutations and are known as single amino acid polymorphisms (SAPs).

Using the LLNL-developed process, proteins are first extracted from a bone sample and broken down into shorter amino acid chains, called peptides. The researchers then use liquid chromatograph-mass spectrometry to separate, detect and quantify the peptide sequences.

Results are compared to a protein sequence database to identify known SAPs present in the sample. Given data on the frequencies of each corresponding DNA mutation, the researchers can derive identifying information and determine the biogeographic origin of the person who provided a sample.

In addition to developing ways to use protein markers from hair and bones to identify people, Livermore researchers also are working to show the feasibility of a third use of protein markers — from shed skin cells.

"Forensic scientists exploit DNA from touch evidence, such as fingerprints. Those fingerprints also contain shed skin cells that we believe can be used to identify people," Hart said.

The team members’ work to assess and use protein markers from human hair has come a long way since they first announced the breakthrough in September 2016, Hart emphasized.

Using their current sample sizes, the researchers now are able to find enough distinctive markers to provide a unique pattern for an individual that would distinguish that person among a population of 1 billion people.

Current research funding for the $200,000 project comes from LLNL’s Laboratory Directed Research and Development program, which supports high-risk, potentially high-payoff projects at the forefront of science and technology.

While the researchers’ article is due to be published in mid-June in a print edition of Forensic Science International, it is now available online.