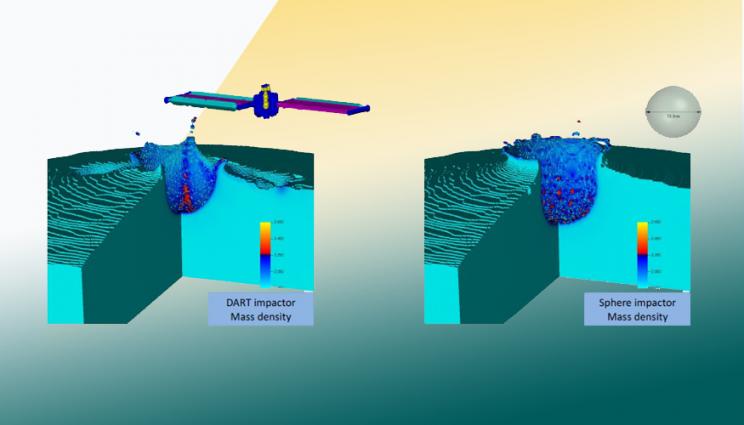 Simulations of NASA’s DART spacecraft, which will crash into asteroid Dimorphos in fall 2022, show the differences between modeling the full spacecraft geometry and a spherical approximation of the spacecraft. Credit: Mike Owen, Spheral ASPH code.

Megan Bruck Syal, who helped lead the Lab’s participation in the event and who also was a conference session chair, said this year’s conference was planned to occur at the United Nations Office at Vienna, Austria. Due to the pandemic the conference went into a fully virtual mode, but was still held on Vienna time, which meant very early mornings for the LLNL team.

“Every other year, PDC brings together an international group of experts on technical and policy issues surrounding the defense of Earth from hazardous asteroids and comets,” she said. “We know that currently, the U.S. has many knowledge and capability gaps for planetary defense readiness. The work we are doing today, and the opportunity to discuss that work with the broader international community at venues like PDC, is helping to close these gaps.”

A central component of every PDC is a Hypothetical Asteroid Impact Scenario, which simulates the high-stakes technical questions and decision-making that would be necessary in the face of evolving information about a real asteroid threat.

“As subject matter experts on nuclear and kinetic deflection techniques, LLNL scientists always play an important role in how these exercises unfold,” she said. “This year was no different, as the very short warning time for the Hypothetical Asteroid 2021 PDC meant that only a nuclear disruption mission could successfully prevent Earth impact.”

In the event that such an impact is unpreventable, LLNL scientists also conduct consequence assessment calculations, quantifying the damage from low-altitude airbursts and surface impacts. This is key for advising emergency response measures.

See the video detailing the above X-ray energy deposition modeling.

This year, the Lab’s team presented advances in X-ray energy deposition and re-radiation modeling, which is essential for accurate nuclear deflection and disruption calculations. Team members also presented on preparations for NASA’s Double Asteroid Redirection Test (DART) Mission, including the effects of modeling the DART spacecraft’s detailed geometry in its high-speed impact with asteroid Dimorphos, planned for fall 2022.

New machine learning approaches for multiphysics simulations, which will be important for full interpretation of the data received from the DART experiment, also were presented by the LLNL team. Advances in airburst modeling, using the Adaptive Smoothed Particle Hydrodynamics (ASPH) code Spheral, also were presented.