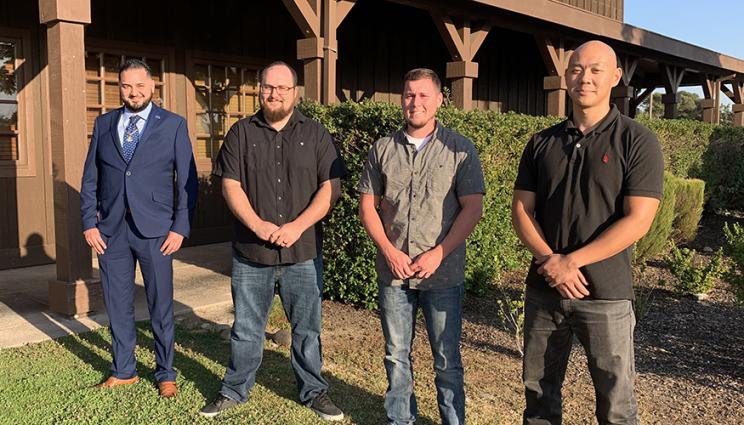 The 2020 and 2021 graduates of Lawrence Livermore National Laboratory’s Machinist Apprentice Program were honored July 29 for completing the demanding four-year apprenticeship and recognizing their passage to becoming registered journeyman machinists in the State of California. From left: Jesus Gonzalez, Bill Shepherd, Zach Dunn and Victor Jung (2020 graduate Taylor Gaalswyk not pictured).

Zach Dunn has always enjoyed working on cars and building things with his hands. Deciding a four-year college wasn’t for him, he pursued the trades as a machinist, joining Lawrence Livermore National Laboratory’s prestigious Machinist Apprentice Program in 2017 right out of high school.

On July 29, Dunn became one of five recent graduates of the program for 2020 and 2021 honored for completing the demanding four-year apprenticeship and recognizing their passage to becoming registered journeyman machinists in the State of California. The graduates — Dunn, Jesus Gonzalez, Bill Shepherd and Victor Jung (2020 graduate Taylor Gaalswyk did not attend) — were joined by supervisors and current and former apprentices who lauded the graduates for their accomplishments and encouraged them to continue their journey.

“It means a lot to see that a lot of people care and want to see you succeed,” said Dunn, who graduated from the program July 17. “When people are coming from the state and older apprentices are coming back and congratulating you, it makes you feel like you did something worth doing.”

After foregoing a ceremony last year due to COVID-19, program organizers resumed a long-held tradition — a celebratory dinner at Cattleman’s Restaurant in Livermore, where the graduates and their families enjoyed a steak dinner.

“They said it’s not official until you get the Cattleman’s dinner,” joked Shepherd, a 2020 Apprentice Program graduate and senior machinist who works in the polymer additive manufacturing group. “It was a long journey, but it all comes back around. It’s definitely a feeling of completion and moving onto the next step. I’m excited for the future.”

The group received their journeyman certificates prior to the ceremony, recognizing them for proficiency in general and precision machining. All five graduates are currently working at LLNL, in the Main Bay, Target Fabrication, Polymer Additive Manufacturing and Special Materials Machining.

After a year hiatus, Engineering Section Leader Rich Seugling said it was important to hold the ceremony to show the new graduates that machining “isn’t just a job, it’s a career and it’s a family.”

“When they go through the apprentice program together, there are bonds built that don’t break,” Seugling said. “It was rough on (the 2020 graduates), but the silver lining of having our workforce come back early in the pandemic is that we’ve been together pretty much the whole time on-site, doing what we need to do to support the programs. That sometimes gets lost because it goes on behind the scenes, but long-lasting camaraderie builds during difficult times.”

Gonzalez, a 2020 graduate and currently a senior machinist working in special materials, said he was at “a loss for words” at being recognized by his fellow machinists and current apprentices after a year of waiting, and felt “indebted to give back to the program.”

“I feel appreciation for everybody that’s contributed to my success in the program, from the supervision and leadership to my fellow journeymen that I worked side-by-side with, to the mentors that I’ve had along the way,” Gonzalez said. “It feels good. It’s been five years in the making.”

Jung, an LLNL senior machinist and 2021 graduate who works in the Main Bay, echoed Gonzalez’s sentiments, adding that the apprenticeship challenged him to learn new techniques, machines and materials.

“It feels like an accomplishment,” Jung said. “It’s been on my mind for four years. A lot of work went into it and a lot of people helped me along the way. There were hard jobs where help was needed.”

“It’s a point of pride,” Sage said. “A lot of people invest in these apprentices, and they perform and give back. The whole system is fantastic. To me it’s a shining star of manufacturing.”

“It’s on par with a college graduation, except they’re not graduating and looking for a job,” added Main Bay Machine Shop Supervisor and Apprenticeship Manager Jason Carroll, an Apprentice Program graduate himself. “They’ve been training for this job for four years with world-class machinists and they’re graduating without college debt … It’s a great program.”

Also in attendance was Hershel Baser, representative for the California Department of Industrial Relations’ Division of Apprenticeship Standards, who congratulated the graduates on completing “one of the best programs in the state.”

“From the start to the finish, it’s a big dedication. We expect all the apprentices to be all in, and it’s very hard to do,” Baser said. “With everything you’ve done, you are no longer apprentices in the state’s eyes, you are now registered journeyman.”

Since its inception in 1954, the award-winning Machinist Apprentice Program has graduated 157 apprentices, many of whom have gone on to enjoy long careers at the Lab. Selected candidates are required to complete eight 1,000-hour training periods and are required to demonstrate mastery of all training and education objectives to receive their state-certified machinist certificate.

“It’s a really important program for the Laboratory,” said Materials Engineering Division Leader Chris Spadaccini. “Without it, we wouldn’t be able to deliver on a lot of our missions. This is how we need to pipeline talented machinists into the Lab. It’s really critical.”