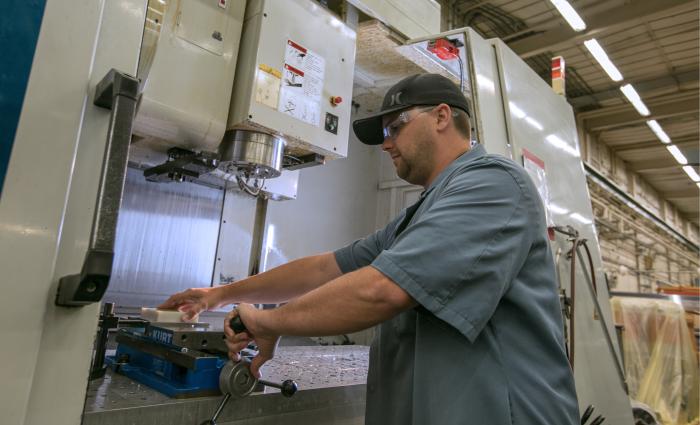 Lawrence Livermore National Laboratory machinist Brandon Pratt works on the VMX 50 machine. He became one of the latest graduates from the Machinist Apprentice Program, a four-year on-the-job training for entry-level machinists. Photos by Julie Russell/LLNL

While he was working as a machinist in Oakland and taking classes at Laney College, Wesley Scoggins wanted to improve his skills to find a better job.

In 2012, he answered a Craigslist posting for a slot in the Livermore Lab Engineering Directorate’s Machinist Apprentice Program. It was an opportunity he couldn’t pass up.

"It’s really one of the only machinist apprenticeships left out there," Scoggins said. "I wanted to be all of those things (employers look for). If you go through this program, you’re pretty well set up as a machinist. You’re not just doing a job, you’re part of the Lab and cutting-edge science as well." 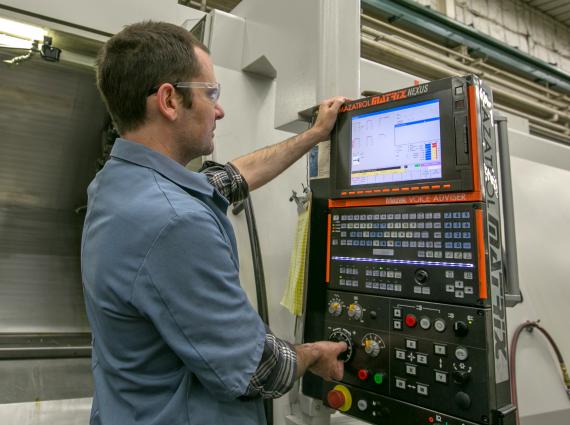 On June 16, Scoggins and fellow machinist Brandon Pratt became the latest graduates from the apprenticeship program, a four-year on-the-job training for entry-level machinists. Both men received California State Journeyman Cards and have been hired on as full-time Lab employees.

During his apprenticeship, Scoggins worked in various shops around the Lab, where he was exposed to machines and products not found anywhere else. LLNL also paid for him to earn his associate’s degree from Laney College. He was recently hired on at the Lab as a journeyman, where he will be working in the Lab’s main bay machine shop.

"It’s definitely helped me," Scoggins said of the program. "Aside from just being a better machinist, I’m a lot more confident in my skills. I’ve been exposed to a lot of different things you wouldn’t normally be exposed to."

For Pratt, who heard about the apprenticeship from a friend who graduated from the program, it was a chance to find job security and learn from some of the world’s top machinists.

"Coming over here is more of a career; it’s somewhere you could retire from," Pratt said. "At a place like this, there’s always room to move up or learn more. The sky’s the limit."

Through the program, Pratt also was able to attend classes at Modesto Junior College, where he plans to finish up his associate’s degree in machine tool technology. LLNL hired Pratt as a senior machinist, where he is currently working in hydro-assembly.

"The apprenticeship gave me the education and on-the-job skills to become better at the trade," Pratt said. "The journeyman machinists at the Lab are always willing to help figure out a problem, or to help complete a tricky job. Also, having junior college as a requirement helps to motivate me to get a degree and become more of an asset to the Lab."

The Machinist Apprentice Program began in the 1950s, and has a long history of providing education and training in the machine tool trade. The four-year Machinist Apprenticeship Program is very selective -- typically hiring two out of 100-plus applicants.

Selected candidates are provided with a mentor in every shop and required to complete eight 1,000-hour training periods. If they’re able to show mastery of all training and education objectives, they are rewarded with a state-certified machinist certificate.

"Brandon and Wes have done a fabulous job of developing," said Lab manufacturing section leader Mike Prokosch. "This is a big accomplishment for them, as well as the many that have supported them along the way. Giving guidance and instruction to the next generation is a strong tradition in the machinist trade, and this tradition is now an expectation for them. They’ve both set off on a specialized course that will be important areas for WCI over the next decade. They’re solid employees and very mature journeymen we can all be proud of."