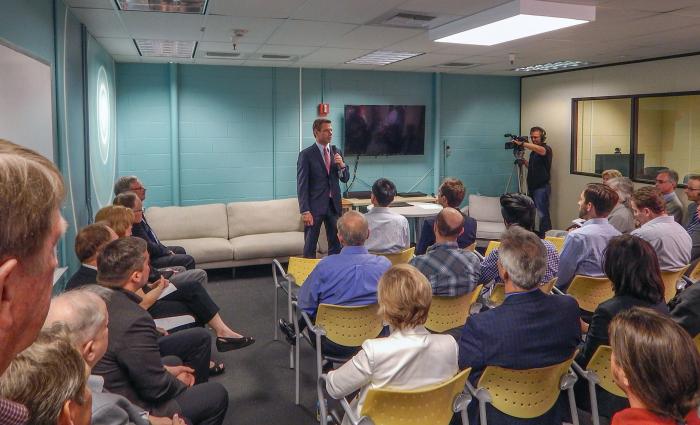 Rep. Eric Swalwell, D-Calif., addresses the crowd at a LabCorps event, which was hosted by Livermore’s i-GATE Innovation Hub. Energy projects from Lawrence Livermore and Sandia national laboratories were selected to participate in the pilot Department of Energy program to facilitate the commercialization of technologies with the potential to rapidly benefit society. Photo by Julie Russell/LLNL

Lawrence Livermore National Laboratory (LLNL) is a key player in an emerging Tri-Valley technology innovation ecosystem that is attracting the attention of entrepreneurs around the country.

Rich Rankin, director of LLNL’s Industrial Partnerships Office (IPO), likes to think of the innovation ecosystem as a baseball catcher’s mitt. When Rankin arrived from Idaho National Laboratory two years ago he saw all the elements of an ecosystem — the resources and expertise to take technologies and ideas from the drawing board to the commercial market — "but they just weren’t laced together.

"We have all the elements of the catcher’s mitt here in the Tri-Valley, but we had to lace them together," he said.

"We have all the people and capabilities to give aspiring entrepreneurs the skills they need to blossom," Rankin said

From research culture to business world

Reflecting on the Department of Energy/National Nuclear Security Adminisration’s growing emphasis on rapidly commercializing technologies that benefit society, the Laboratory is now supporting aspiring entrepreneurs by providing expertise to help scientists make the transition from LLNL’s research culture to the world of business and industry. LLNL’s first ‘National Laboratory Entrepreneur Academy’ was held in June. The NLEA, co-sponsored by Sandia National Laboratories-California, gives innovators and entrepreneurs a boot camp-like experience to help them move ideas into innovation and application, whether in a proposal, an agreement with industry or in forming a company.

In March, research projects from LLNL and Sandia were selected for a pilot DOE program called LabCorps,  an effort to accelerate the transfer promising clean energy technologies to the commercial marketplace. The selections were announced in a ceremony attended by Rep. Eric Swalwell, Livermore Mayor John Marchand and local economic development officials at the i-GATE Innovation Hub in downtown Livermore.

The winning principal investigators selected to participate in the new program were LLNL’s Yining Qin for his project, "Optimization of Building Efficiency," and Sandia’s Jeff Koplow, for "Twistact — The Key to Proliferation of Wind Power." Qin and Koplow received $75,000 each to develop commercialization plans for the technologies. The two project teams, which consist of the principal investigator, an entrepreneurial lead and industry adviser, are attending National LabCorps entrepreneur training this year.

The teams also will have access to a suite of commercialization resources, including technology validation and testing, facility access, techno-economic analysis and other incubation services.

Qin, an LLNL computer scientist, acknowledges that commercializing a technology requires a different mindset. "I never thought about doing something like this before," Qin said. "It was a very big change to my mind as a scientist. We learn that it’s most important to focus on the business model. We need to show investors how much they’ll benefit; how they will save energy costs.

"We can’t just think about it as a scientific problem of energy conservation, but we need to ask ourselves ‘what are the customer’s headaches?’ and 'how does my technology help?'"

The resources and guidance provided by IPO served as a primer to get him started by teaching how to use simple language to describe technology, present to investors and potential customers and develop a rudimentary business model.

But commercializing an idea or technology is in most cases a long arduous process, and the resources and expertise needed to succeed go well beyond the Laboratory. The capital and business acumen of experienced venture capitalists, entrepreneurs and business development specialists from the private sector are essential to success.

And the need for workspace is critical, particularly when a product or service is under development and not yet bringing in revenue.

Incubators and accelerators such as i-GATE and Innovate Pleasanton are helping new entrepreneurs navigate the potentially treacherous levels of technology readiness, a scale formally known as Technology Readiness Level, or TRL. Development levels 1-7 are commonly referred to as the "valley of death," according to Greg Hitchan, managing partner at Innovate Pleasanton.

"We think of ourselves as mentor capital for potentially disruptive and advanced technologies," Hitchan said.

Innovate Pleasanton is a privately funded accelerator that offers 30,000 square feet of office and workspace to startup companies. Just as important to new entrepreneurs, the companies offer access to investors, intellectual capital for business development, sales, marketing and legal advice through both internal and external partners.

"Entrepreneurs here learn a lot from each other and they understand that sharing experiences and ideas can only help them succeed," Hitchan said.

Hitchan says the typical startup at Innovate Pleasanton has one to 10 employees, is usually focused on hardware or software development, has a product or service nearing commercialization, and needs workspace and expertise to make the final leap to market.

For example, a senior LLNL scientist has been working with US LADAR, which is developing a 3D vision sensor for autonomous platforms such as vehicles and drones. With its laser detection and ranging (LADAR) based sensor aided perception system, US LADAR offers performance improvements over existing technology. The primary markets are in commercial vehicles and robotics, though the technology also has defense applications.

Other technologies under development at Innovate Pleasanton that are of interest to Livermore, Sandia and other national labs include: a friction reducing coating technology, being developed by C2D Technology, that enables greater engine fuel efficiency; and a micro-wire-based flexible and high energy density solid state battery architecture, developed by KalpTree Energy, with broad applications in portable electronics, automotive, medicine, consumer products and defense. Expertise from national labs is being tapped for the development of these technologies.

"The depth and breadth of national lab science and technology R&D offers a natural tie-in that helps move the technologies being developed by startups along," Hitchan said.

"We saw the Tri-Valley as an untapped resource," he said of the decision to locate in the area. He also notes the region is attracting national attention because of the tech companies already in residence, entrepreneurial resources in place and affordable commercial workspace.

One such resource is the i-GATE incubator — a partnership of local industry, national labs and local government based in Livermore. A nonprofit founded in 2010, i-GATE provides access to workspace, membership in a like-minded entrepreneurial community and access to capital and local expertise. The membership-based business model for i-GATE appears to be working, according to Brandon Cardwell, i-GATE director. The incubator’s first six companies have raised over $8 million collectively, and i-GATE’s new Downtown Livermore facility is nearly at capacity. "We can tell it’s working because members are staying and making progress in the market," Cardwell said.

In addition, i-GATE is attracting the attention of entrepreneurs around the country, who see the Tri-Valley as a welcoming and fertile environment for starting up a company. In addition to a highly developed transportation, communication and education infrastructure, the Tri-Valley abuts the Bay Area, with all its urban resources, to the West and an agricultural region to the east.

"When we’re attracting companies like this from the East Coast, it’s a clear sign we’re doing the right thing," he said. "The companies that are coming in are developing ‘impact technologies’ that change the way people live for the better."

Companies based on Lab technology and LLNL researchers are among those that have benefited from i-GATE. This includes two companies based on Lab intellectual property, one a recently formed company, Safe Traces, still in incubation, and another, Point-of-Care Medical Systems, that has ‘graduated.’

A strength of i-GATE and a prime reason the region has become attractive to entrepreneurs is the partnership with local government, which plays an important role in developing and maintaining infrastructure, as well as providing incentives to new businesses.

i-GATE itself is housed in a previously ‘dark’ building owned by the City of Livermore. "Even more important than government incentives to new companies is education, highly educated people and a good system in place for moving people and ideas," Cardwell said, adding that "this is in the purview of government."

Projects such as the joint Lawrence Livermore and Sandia national lab Livermore Valley Open Campus (LVOC) help keep the local partnership energized and committed to growing the innovation ecosystem, according to Cardwell.

A change in mindset

Buck Koonce, assistant to LLNL Director Bill Goldstein for business development, says the open campus reflects how much the Lab has changed in the way it seeks to work with industry and academia.

"The mindset at the Lab has really changed in the way unclassified research reaches out to industry, improving the Lab’s ability to connect with businesses, Koonce said. "The open campus is the physical representation of that change in mindset."

The Laboratory not only allows but encourages researchers with promising ideas to take entrepreneurial leave, he said. "The workforce has changed so much from the past when people spent an entire career here. Today, it’s inevitable that some of our employees will leave us."

"We want them to feel empowered and loyal to the Lab," Koonce said. "Serial entrepreneurs maintain ties and even come back to the Lab, bringing other talented researchers with them, much like renowned professors at universities attract talented students. The old model doesn’t work anymore."

More local entrepreneurial talent and startups can only benefit the national labs, he said. "Not only do we spin out Lab-generated technologies that benefit society, but we can spin in technologies from private industry that help us with our national security missions."

In addition, expanding collaboration with academia is attracting universities, even those from out of state, to locate facilities near the labs.

Plans to build additional facilities in the open campus are under development, notably for additive manufacturing, a rapidly growing research area at the Laboratory. A permanent building for the High Performance Computing Innovation Center (HPCIC) also is planned.

The first building to open its doors in the open campus, the HPCIC makes the Lab’s supercomputing resources and expertise available to industry with the goal of boosting U.S. economic competitiveness.

Cardwell says the sustained support of the Lab and its parent organizations – the Department of Energy and the National Nuclear Security Administration – for the open campus and the regional innovation ecosystem help sustain investment by other partners. "Ultimately for the local communities, the return on investment is job creation."