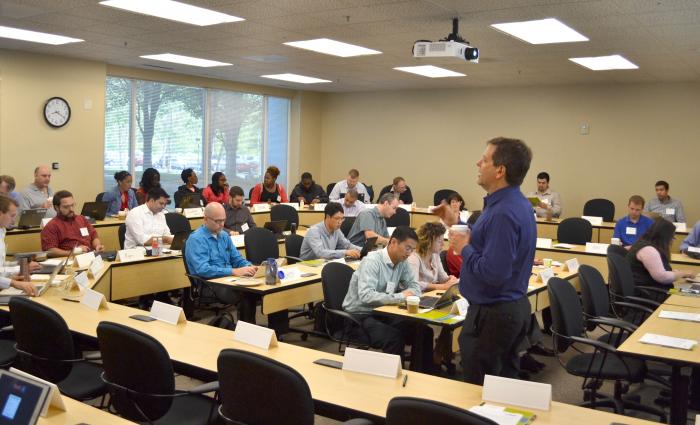 Cleveland Justis of the University of California, Davis-affiliated Institute for Innovation and Entrepreneurship was one of the instructors for the first-ever National Labs Entrepreneurship Academy, a partnership of LLNL, Sandia National Laboratories/California and UC Davis that is designed to help drive innovation at the labs.

Nearly 50 researchers from LLNL and Sandia National Laboratories/California got down to business for three days in early June, learning about life as an entrepreneur.

The scientists and engineers attended the first-ever National Labs Entrepreneurship Academy (NLEA), a partnership of LLNL, Sandia and the University of California, Davis that is designed to help drive innovation at the labs.

"We have world-class talent at LLNL and we want to teach our scientists and engineers entrepreneurial skills that will help them in the innovation process, whether they’re working with industry or government sponsors, or, if they choose, becoming part of a startup based on Lab technology," said Rich Rankin, the director of Livermore’s IPO.

"The Entrepreneurship Academy is all about innovation and increasing the rate at which Lab technologies successfully enter the marketplace," Rankin added.

Two of the Lab engineers who attended the workshop gave it high marks.

"It’s one of the best courses I’ve seen on being an entrepreneur," said Rob Hills, who heads LLNL’s Engineering Partnerships effort. "We need to send all of our folks who are doing business with the outside world – be it companies or sponsors – to this course.

"I went to it because a number of our people are trying to develop business skills. That doesn’t mean they necessarily want to leave the Lab, but they want to learn to talk to customers in their own language."

"It’s an intensive course that looks at understanding the perspective of investors and entrepreneurs. It was well-balanced. The core is about a different way of thinking, looking at the users and market needs, and about always being ready: You never know when you could be approaching an interested party or investors, so it is critical to have your ‘elevator pitch’ ready to go because what you want to hear them say is, ‘tell me more.’ "

Andrew Hargadon, the faculty director of the UC Davis-affiliated Institute for Innovation and Entrepreneurship and one of two instructors for the workshop, thought the eventwent "very well."

"What was terrific was the quality of the scientists and engineers involved and their enthusiasm for exploring the commercial potential of their work.

"We as instructors were in a great position. We get to take a lot of really smart people and teach them about something – business – that they don’t know much about. This is every teacher’s dream. This combination of deep science and an introduction to entrepreneurship can help make their research have a bigger impact."

The key purpose of the Entrepreneurship Academy, according to IPO Deputy Director Roger Werne, was to teach Lab scientists and engineers to talk to the business community in a language they understand.

"The Department of Energy has been excited about its Lab Corps program, the purpose of which is to teach lab scientists and engineers about business and entrepreneurship," Werne said. "The NLEA program does the same thing, except that it makes it available to a much larger set of LLNL and Sandia employees.

"We thought the workshop was terrific. The UC professors were well-organized, articulate and very insightful in what they presented. The private sector presenters brought their experience and war stories, which reinforced the concepts the professors were teaching," Werne noted.

One of the business presenters was Eric Cummings, a former Sandia scientist who told stories of founding his companies – Cool Earth Solar and Maxout Renewables.

Former LLNL physicist Nick Colella discussed the startup of his firm, nCHIP, and how people can know when a technology is ripe for the marketplace.

Werne gave his own personal story in the presentation, "Anatomy of a Not-So-Successful Startup Company," that focused on the pitfalls and hurdles he countered starting a company.

Werne, who as the Lab’s associate director for Engineering in the early 1990s had been a leader in technology transfer efforts, left the Lab for five years between 1995 and 2000 to co-found ITI Technologies, a firm that aimed to develop surgical instruments for magnetic resonance image-guided surgery. He described the problems that led to his firm’s demise.

A Silicon Valley entrepreneur, Tony Lazar, who has founded two companies and is working to commercialize the Lab’s micropower impulse radar technology for hematoma detection, told the participants about the need to "perfect their pitch."

One panel discussion, "Market Validation: From Lab to Market," focused on how researchers can determine whether their product or business will be successful. The panelists included Jim Kiles, Greg Hitchen and Jim Presley, all of whom are members of the LLNL IPO industrial board.

In addition to Hargadon, the other instructor for the workshop was Cleveland Justis, of the Institute for Innovation and Entrepreneurship.

There is a "high probability" that the Entrepreneurship Academy will be offered again, possibly in the fall, according to Rankin.