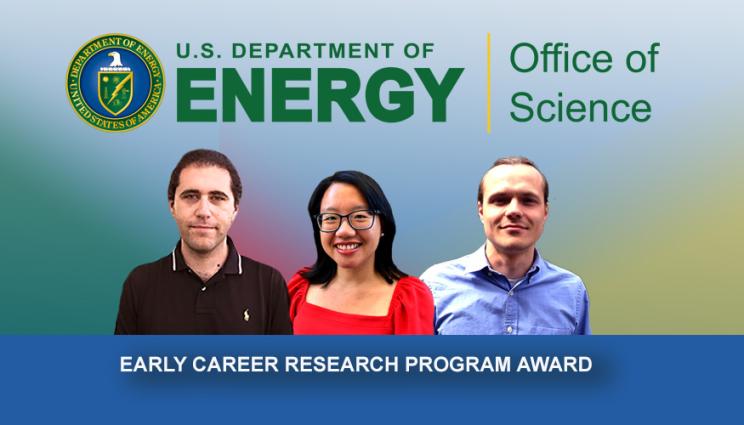 Mimi Yung, John Despotopulos and Timofey Frolov are among 83 awardees receiving the recognition. Under the program, typical awards for DOE national laboratory staff are $500,000 per year for five years.

“Supporting America’s scientists and researchers early in their careers will ensure the U.S. remains at the forefront of scientific discovery and develops the solutions to our most pressing challenges,” said U.S. Secretary of Energy Jennifer M. Granholm. “The funding will allow the recipients the freedom to find the answers to some of the most complex questions as they establish themselves as experts in their fields.”

The Early Career Research Program, now in its 13th year, is designed to bolster the nation’s scientific workforce by providing support to exceptional researchers during crucial early-career years, when many scientists do their most formative work.

Yung, a biochemist, was selected for her work in biological and environmental research, Despotopulos was selected for his research in nuclear physics and Frolov was chosen for his work in fusion energy sciences.

A staff scientist and deputy group leader of the Systems and Synthetic Biology Group in the Biosciences and Biotechnology Division, Yung was nominated for her research on protein compartmentalization systems and how they can be used to achieve novel functions in genetically engineered microorganisms.

“I feel incredibly grateful and truly honored to receive this award. It is a real highlight of my career thus far,” Yung said.

Yung joined the Lab in 2012 and works on using synthetic biology to develop next-generation bioproducts and biomaterials in support of the U.S. bioeconomy.

She plans to use the award money to understand the basic mechanisms for how microorganisms natively produce and maintain protein compartmentalization systems called encapsulin nanocompartments. Her team will use this basic knowledge to engineer encapsulin systems to achieve compartmentalized biosynthesis and enhanced yields of important biomaterials (inorganic nanoparticles) in microorganisms.

As a staff scientist in the Nuclear Chemical Science Division, Despotopulos was nominated for his work in the measurement of neutron-induced cross sections of nuclides, that has implications for national security and can improve our understanding of stellar nucleosynthesis.

“I’m shocked at receiving the award and excited to be able to perform this research,” he said.

He plans to use the award to develop capsule doping for nuclear reaction measurements at NIF. This research leverages unique capabilities at two of the nation’s premier research facilities: the NIF at Lawrence Livermore and the Facility for Rare Isotope Beams (FRIB) at Michigan State University. FRIB is the only accelerator in the world capable of generating many of the nuclear isotopes that are created inside stars, whereas NIF is the world’s only facility capable of recreating the conditions inside stars, which it achieves by aiming 192 laser beams at a tiny capsule to induce nuclear fusion.

Frolov is a physicist in the Materials Science Division and was nominated in the fusion energy sciences division for his work in grain boundary structure engineering of resilient tungsten alloys for fusion applications.

“I am excited about receiving this award and continuing my research,” he said.

Frolov joined LLNL in 2015 and his research focuses on thermodynamics and computational modeling of materials interfaces, with the goal of understanding how these defects influence the properties of materials.

The award funding will allow him to advance the fundamental understanding of grain boundaries to suggest new strategies for crack mitigation in additively manufactured refractory alloys, therefore enabling the design of resilient tungsten alloys for fusion energy applications. He also is passionate about raising awareness of ergonomics problems and work-related injuries at the Lab.

Since its inception in 2010, the Early Career Research Program has made 785 awards, with 508 awards to university researchers and 277 awards to national lab researchers.

To be eligible for the DOE award, a researcher must be an untenured, tenure-track assistant or associate professor at a U.S. academic institution or a full-time employee at a DOE national laboratory, who received a Ph.D. within the past 10 years. Research topics are required to fall within one of the Department's Office of Science's eight major program offices:

Awardees were selected from a large pool of university- and national laboratory-based applicants. Selection was based on peer review by outside scientific experts.