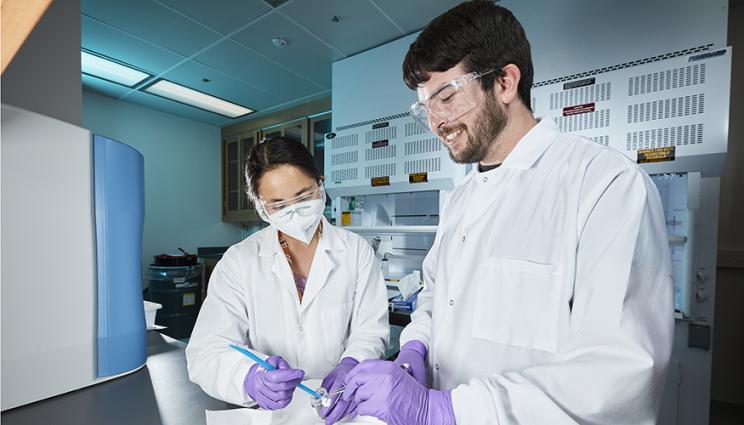 Summer intern Jordan Stanberry and his mentor Naomi Wasserman divide samples of tunnel pond sediments from the Nevada National Security Site and prepare them to be mineralogically characterized via X-ray diffraction. Photo by Garry McLeod/LLNL.

A chemistry graduate student from the University of Central Florida (UCF), Stanberry is participating in an eight-week Glenn T. Seaborg Institute (GTSI) internship program. The program offers students the opportunity to conduct hands-on nuclear science research under the supervision of an LLNL postdoctoral or staff scientist mentor.

Mavrik Zavarin, director of the Seaborg Institute, and Jordan's adviser at UCF, Vasileios Anagnostopoulos, are currently collaborating on a workforce development project funded through the Department of Energy’s (DOE) Office of Science. Zavarin said: "Bringing Jordan to LLNL as part of our internship program is the first step in building a stronger partnership between minority-serving institutions such as UCF and LLNL."

For his summer project, Stanberry has been working to prepare sediment samples from drainage ponds at the Nevada National Security Site (NNSS). This research is a part of a larger biological and environmental research initiative, funded by the DOE's Office of Biological and Environmental Science, to better understand the long-term behavior of radionuclides and their mobility at various field sites.

Numerous underground nuclear tests were conducted at NNSS (previously named the Nevada Test Site) between 1951 and 1992. Environmental releases of long-lived radionuclides from this era of nuclear testing have the potential to cause persistent health impacts for generations to come. Over the years, scientists have monitored the water quality from various ponds within the field site, but the sediments at the bottom of these ponds have never been studied in detail for radionuclide distribution. These sediments are important because they can potentially sequester radionuclides before the contaminants have the chance to enter the fractured bedrock hundreds of meters below the ponds. Ultimately, this research will inform scientists about the site’s contamination timeline — the time it would take radionuclides to migrate deeper into the sediments from the ponds.

Prior to the start of Stanberry’s internship, his mentor Naomi Wasserman collected the sediment samples from a specific site within NNSS that has multiple catchments collecting groundwater from a tunnel where several underground nuclear tests were conducted. Wasserman, now a postdoctoral researcher for LLNL’s Nuclear and Chemical Sciences Division, was once a GTSI summer intern herself.

“My goal as a mentor is to let Jordan lead the science and have a successful summer,” she said. “With the help of Jordan and the other summer students, our research team hopes to ask thought-provoking questions that will get us one step closer to understanding how radionuclide transport and distribution works in various environmental settings.”

Wasserman collected 11 sediment cores from four different ponds. To prepare the samples for analysis, Stanberry divides the sampled cores into approximately 1-inch subsections. After carefully preparing the samples, the research team can begin to conduct a series of depth profiling analyses of the radionuclides — cesium-137 (Cs-137) and plutonium (Pu).

Wasserman explained: “Depth profiling will help us find out where radionuclides are being distributed in the sediments. That is, are radionuclide levels higher or lower as you go deeper underground?”

Additionally, these analyses will help determine the sediment’s mineralogy and total organic carbon, informing scientists of the surfaces that radionuclides are prone to attaching to — therefore influencing radionuclide migration.

To conduct these analyses, scientists use gamma spectrometry to measure the Cs-137 activity, X-ray diffraction to characterize the mineralogy and multi-collector inductively coupled plasma mass spectrometry to measure the Pu concentration. Stanberry and the team hope their results will be transferable to other contaminated field sites beyond NNSS, allowing for a broader understanding of how radionuclides move in the field.

When asked about how his internship is going so far, Stanberry says that he is enjoying his work‒life balance at Livermore and is excited to bring the analytical techniques that he is learning back to his home institution.

“The best part about working at a national lab is not only having access to a ton of resources and decades of scientific excellence, but also that you are surrounded by people who are excited and willing to share their knowledge with you,” he said.

All eyes on Kerrie Ingraham