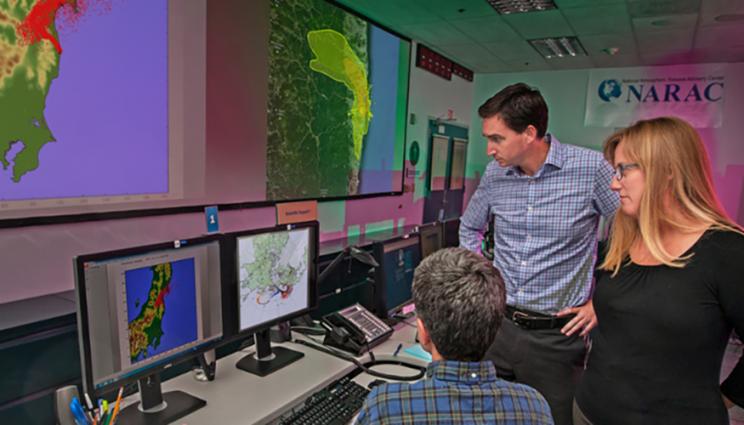 Ten years ago today, on March 11, 2011, a 9.0 Richter-scale earthquake and tsunami in Japan resulted in severe damage to the Fukushima Dai-ichi nuclear power plant and also led to releases of radioactivity into the environment.

That same day, the U.S. Department of Energy (DOE) activated Lawrence Livermore National Laboratory’s National Atmospheric Release Advisory Center (NARAC) for what would turn out to be an historic response.

The center provided hundreds of predictions about potential radiation and dose levels near the plant site, the rest of Japan and internationally over an 11-week period, including operating 24 hours per day, seven days a week for more than three weeks during the height of the crisis.

Other teams from Livermore also were activated, including experts in field radiation monitoring and laboratory analysis of radioactive air filters and soil samples.

Livermore scientists provided key data and analyses through DOE to the U.S. government and the government of Japan to assist with assessment of radiation doses from environmental contamination, and inform critical decisions on evacuation, relocation and reoccupation of people in Japan.

This collective effort was called “Operation Tomodachi,” which translates to Operation Friends.

Livermore field response teams were activated along with DOE teams from across the country, to deploy to Japan to help with monitoring and sampling of air and ground contamination. LLNL members of the Radiological Assistance Program were deployed to Japan for three weeks, and helped DOE provide critical information to U.S. embassy staff and other U.S. interests in Japan.

LLNL also served as the DOE’s lead for laboratory analysis of air filter and soil samples from Japan, working with other U.S. laboratories. Livermore’s Nuclear Counting Facility was instrumental in this work. In total, the Lab analysis team performed 1,532 analyses.

In addition, Livermore scientists on DOE/NNSA’s Radiological Triage team provided critical analyses of those samples and field measurements to determine which radionuclides were present and the levels of radioactive contamination in the environment, to help assess radiation doses to people. The Radiological Triage team processed hundreds of gamma spectra samples taken in the field.

“NARAC work on the Fukushima accident was by far the most extensive in the center’s 40-year history of responding to emergencies,” said NARAC Chief Scientist John Nasstrom.

NARAC scientists not only produced a record number of predictions, they also produced many different types. NARAC was called upon to provide: analyses of possible worst-case releases of radioactivity from the plant, working closely with the Nuclear Regulatory Commission; analyses of past and current actual releases; and  hour-by-hour forecasts of atmospheric plume positions for possible new releases.

These predictions were used by DOE to help guide government decisions, up to the highest levels of the U.S. government in the White House. The predictions informed actions that might be needed to protect emergency responders and the public, including U.S. citizens in Japan.

Because plant conditions and emissions were unmeasured and unknown, DOE and the government of Japan used environmental measurements combined with model predictions to provide the only way to estimate the amount of radioactivity emitted from the damaged plant.

The center also was asked to predict the very low levels of radioactivity that were transported across the Pacific and the possible low radiation doses in U.S. territories. These predictions were later verified by small levels of radioactivity measured on the West Coast of the U.S. In total, NARAC produced more than 300 analyses and predictions, and the NARAC-hosted NNSA Consequence Management website received 3 million hits.

By the time NARAC ended its active operations in late May 2011 and thel Laboratory sample analysis team at Livermore sent its last data set to DOE on Aug 19, 2011, Livermore had worked more than 7,600 person-hours of time in support of the Japan response effort. For their outstanding contributions in support of the Japan emergency, the Laboratory honored the teams with Gold Awards, Livermore’s highest honor on July 8, 2011.

During the past 10 years, Livermore scientists — working with DOE, collaborating laboratories, national organizations and international organizations — have used the experience that was gained during and after the Fukushima emergency to improve emergency response capabilities. This has resulted in improved personnel depth and training, as well as improved tools, technology and inter-organization coordination.

Work after the Fukushima emergency has resulted in significant advances in areas such as radiation measurement, laboratory sample analysis, data collection and dissemination, modeling of atmospheric dispersion and ground deposition, characterization of radiation dose and communication of protective actions needed to protect workers and the public. These advances have helped the U.S. better prepare to respond to any future incidents.

The accomplishments of Livermore scientists, technicians and administrative staff during the Japan emergency are an example of the Laboratory’s fundamental mission — to develop and apply world-class science, technology and engineering, and to harness and integrate multidisciplinary expertise and apply it to real-life problems that affect the nation and the world.

“LLNL showed the ability to bring together specialists from many fields, integrate and sustain their expertise over decades and then deliver at the hour of crisis, to make people safer," Glascoe said. "We are committed to meeting the huge challenge of maintaining and improving this ability, to be ready to respond to future incidents.”