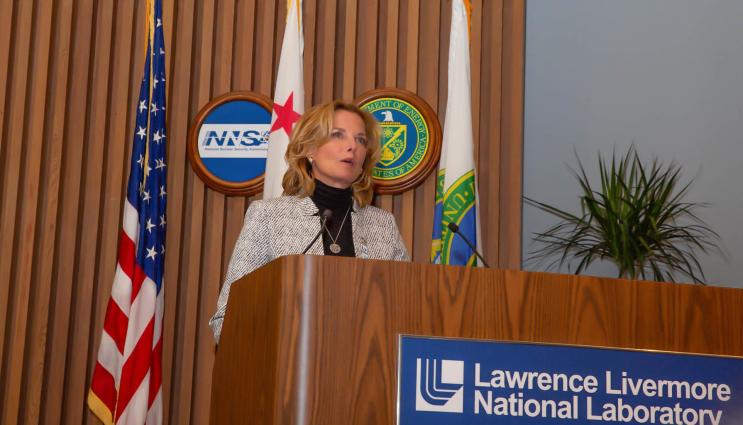 "What the Lab’s National Atmospheric Release Advisory Center (NARAC) does is it provides dispassionate science during fearful events."

In one sentence, Jay Tilden summed up what NARAC has done for the nation for the past 40 years.

Tilden is the National Nuclear Security Administration’s (NNSA) associate administrator for Counterterrorism and Counterproliferation. He joined NNSA Administrator Lisa E. Gordon-Hagerty and Lab Director Bill Goldstein to provide their perspectives on NARAC, which got its start four decades ago during the 1979 Three Mile Island nuclear power plant accident.

During a program — "Celebrating 40 years of NARAC" – held Aug. 13, about 30 current NARAC employees and 15 retired employees were lauded for their work. Two of the retirees included former NARAC program leaders Tom Sullivan and Jim Ellis.

"Forty years of successful continuous operation is a tremendous achievement," Gordon-Hagerty said. "I’m very pleased to be with you today to reflect on the proud heritage of this organization and look forward to its future successes.

"NARAC is a sterling example of the Department of Energy’s multi-disciplinary approach to solving difficult problems. A diverse team of experts comes together to provide real service to the American people."

Gordon-Hagerty, who assumed her current position in February 2018, started her career about 30 years ago at Lawrence Livermore National Laboratory (LLNL) as a health physicist, one of the critical areas of expertise for NARAC.

"As a health physicist by training, I also appreciate the intellectual challenge and intrinsic value of harnessing science to protect the public health," she said.

Goldstein told the audience that NARAC is recognized today as a premier national center for atmospheric hazard prediction and a key part of the national infrastructure for preparedness and response.

"The center is a prime example of the ability to harness the power of science and technology to deal with critical national security challenges by forming teams of scientists, engineers, technicians and supporting staff from many disciplines, including atmospheric science, physics, chemistry, health physics and computer science, to solve problems for our nation," Goldstein said.

"NARAC’s scientists have to be ready to respond on a moment’s notice and have done that 24 hours a day, 365 days a year for 40 years. It’s an incredible record," the Lab director said.

Goldstein, Gordon-Hagerty and Tilden all thanked NARAC’s current and retired employees for their service, with Tilden telling them: "You are part of a proud legacy spanning more than 40 years. I thank each and every one of you for your past contributions, your current efforts and your continued dedication to this signature mission of LLNL, NNSA, DOE and the United States government."

In late March of 1979, there was a partial meltdown of one of the Three Mile Island nuclear power plant’s two reactors along the Susquehanna River just south of Harrisburg in Pennsylvania. Within days, some 140,000 area residents had self-evacuated and there was high public anxiety.

What was then known as the LLNL Atmospheric Release Advisory Capability (ARAC) was soon stood up, the opening chapter in 40 years of operational NARAC atmospheric assessments.

"It was against this backdrop that an urgent call had come to Livermore from DOE headquarters, asking whether ARAC could help and how soon?" Gordon-Hagerty said. "Thus, began weeks of continuous work with the ARAC scientists providing hourly predictions using three-dimensional atmospheric models to monitor and characterize the radiological release.

"This capability proved invaluable in translating technical data to non-technical, trained decision-makers, thereby assuring that their decisions about public health were firmly grounded in science."

"Livermore provided timely and reliable atmospheric dispersion predictions to monitoring teams and emergency managers to help assess how best to protect the health and safety of the public during the accident," he said.

Since Three Mile Island provided the proof of concept for atmospheric centers, "the wisdom of the NARAC model has been vindicated time and time again" for a wide range of events, according to Gordon-Hagerty.

NARAC was operationally activated for responses to the nuclear power plant failures of Chernobyl (1986) and Fukushima (2011), for the 1980 Damascus, Arkansas nuclear weapon accident, the 2010 Deep Water Horizon oil spill fire and the 2017 spread of ruthenium across Central Europe, among many other events.

After the March 11, 2011 devastating earthquake and tsunami that damaged the Fukushima Daiichi nuclear power plant, NARAC worked closely with DOE/NNSA headquarters and other government agencies. The center operated 24 hours per day, seven days a week for almost four weeks and continued to provide support for the remainder of the 2 ½-month DOE/NNSA response, providing hundreds of predictions. 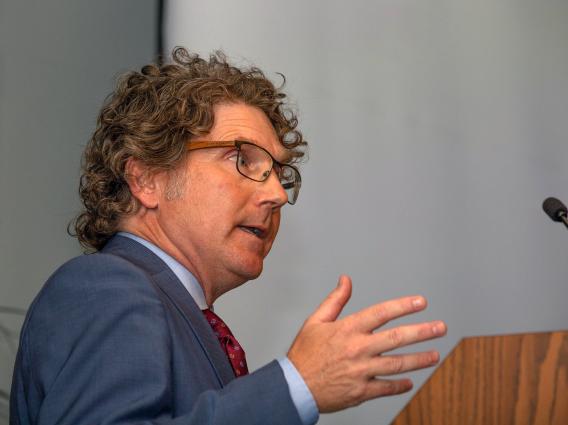 An essential part of NARAC’s success, in Gordon-Hagerty’s view, has been its collaboration with other departments and agencies.

"I would like to thank our many partners for working to maintain, advance and utilize NARAC," she said. "In particular, I would like to acknowledge our friends and great colleagues from the Department of Homeland Security under the leadership of Bill Bryan (the senior official performing the duties of the under secretary for Science and Technology)."

John Nasstrom, a 35-year NARAC veteran who is the center’s chief scientist and who was awarded the NNSA Administrator’s Gold Award in 2018, traced the center’s development through the past four decades.

Nasstrom showed a photo of Joe Knox, one of the LLNL founders of NARAC, with former Director Edward Teller. NARAC’s founders, he noted, were the first ones in the world to tackle the difficult task of moving research on three-dimensional wind and dispersion models into operational systems using Livermore supercomputers of the 1970s.

NARAC Program Leader Lee Glascoe told the audience that the center continues its cutting-edge leadership in the field with advanced computing and data processing.

Recent examples include NARAC becoming the first atmospheric hazard analysis center to operationally use a fast-running computational fluid dynamics model to simulate flow and contamination at the meter scale around buildings, and the first to operationally deploy machine learning tools to boost Bayesian source inversion.

"It’s exciting when any program has a four-decade long run and it’s even more exciting when that program is an active national response asset making a difference in public safety worldwide," Glascoe said.

See more photos of the event.