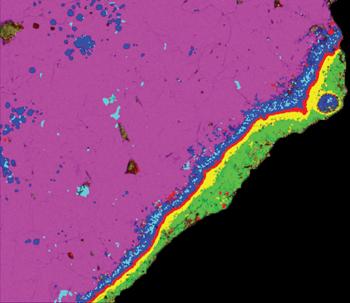 Compositional X-ray image of the rim and margin of a ~4.6 billion year old calcium aluminum refractory inclusion (CAI) from the Allende carbonaceous chondrite. Core extending well beyond the field of view to the upper left consists of melilite, spinel and perovskite. Rim consists of a sequence of mono-mineral layers a few micrometers thick (hibonite, perovskite, spinel, melilite/sodalite, pyroxene, and olivine). A spinel-rich micro-inclusion appears to have been entrapped while the rim was forming.

LIVERMORE, Calif. -- Scientists have found that calcium, aluminum-rich inclusions (CAIs), some of the oldest objects in the solar system, formed far away from our sun and then later fell back into the mid-plane of the solar system.

The findings may lead to a greater understanding of how our solar system and possibly other solar systems formed and evolved.

CAIs, roughly millimeter- to centimeter in size, are believed to have formed very early in the evolution of the solar system and had contact with nebular gas, either as solid condensates or as molten droplets. Relative to planetary materials, CAIs are enriched with the lightest oxygen isotope and are believed to record the oxygen composition of solar nebular gas where they grew. CAIs, at 4.57 billion years old, are millions of years older than more modern objects in the solar system, such as planets, which formed about 10-50 million years after CAIs.

Using Lawrence Livermore's NanoSIMS (nanometer-scale secondary-ion mass spectrometer) -- an instrument that can analyze samples with nanometer-scale spatial resolution -- LLNL scientists in conjunction with NASA Johnson Space Center, University of California, Berkeley and the University of Chicago measured the concentrations of oxygen isotopes found in the CAIs.

In the recent research, the team studied a specific CAI found in a piece of the Allende meteorite. Allende is the largest carbonaceous chondrite meteorite ever found on Earth. It fell to the ground in 1969 over the Mexican state of Chihuahua and is notable for possessing abundant CAIs.

Their findings imply that CAIs formed from several oxygen reservoirs, likely located in distinct regions of the solar nebula. CAIs travelled within the nebula by lofting outward away from the sun and then later falling back into the mid-plane of the solar system or by spiraling through shock waves around the sun.

Through oxygen isotopic analysis, the team found that rims surrounding the CAI show that late in the CAI's evolution, it was in a nebular environment distinct from where it originated and closer in composition to the environment in which the building materials of the terrestrial planets formed.

"Allende is this very unusual meteorite with all these wonderful inclusions (CAIs)," said Ian Hutcheon, one of the LLNL scientists on the team. "The isotopic measurements indicate that this CAI was transported among several different nebular oxygen isotopic reservoirs, arguably as it passed through into various regions of the protoplanetary disk."

A protoplanetary disk is an area of dense gas surrounding a newly formed star. In this case, the CAI formed when our star was quite young.

"It is particularly interesting in understanding the formation and dynamics of our solar system's protoplanetary disk (and protoplanetary disks in general)," said Justin Simon of NASA Johnson Space Center and lead author of a paper appearing in the March 4 issue of the journal Science .

The new observations, "support early and short-lived fluctuations of the environment in which CAIs formed, either due to transport of the CAIs themselves to distinct regions of the solar nebula or because of varying gas composition near the proto-sun", Hutcheon said.