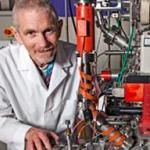 Hutcheon came to the Lab in 1993, after 20 years as senior research associate at the University of Chicago and Caltech, where he established his reputation as an expert in secondary ion mass spectroscopy and its application to the field of cosmochemistry.

Hutcheon made numerous contributions to the study of the isotopic composition of meteorites and what they reveal about the evolution of the early solar system. He also was a key developer of nuclear forensics as both a field of scientific investigation and a scientific discipline with significant applications to national security. He conducted groundbreaking work in the formation mechanisms of planets and meteorites, and subtle, diffusion transport processes in terrestrial and planetary melts, glasses and minerals; and conducted the first NanoSIMS-enabled studies of biological materials (NanoSIMS is a high resolution imaging mass spectrometer used to probe extremely small materials). He authored more than 200 papers and book chapters, and co-wrote  the book “Nuclear Forensics Analysis” with colleagues Pat Grant and Ken Moody.

In his 22 years at LLNL, Hutcheon built the Chemical and Isotopic Signatures Group from himself, two others and one secondary ion mass spectrometer, to a team of 38 (scientists, postdocs, graduate students and technicians), filling Bldg.151 with multiple mass spectrometry labs, SEMs, other analytical equipment and sample prep labs. The breadth of study within the group ranges from time scale and processes of nucleosynthesis; formation and evolution of meteorites and planets; mineralogy and  petrology  of unequilibrated  meteorites; sub-cellular  imaging of  biological samples and isotope tracing into cells of all types; environmental microbiology; nuclear forensics and attribution. The academic excellence he absorbed as senior research associate at University of Chicago and Caltech, in the previous 20 years of his career, burned bright and he tried to instill in his group the importance of doing great science and getting it out into the world through publications.

In recent years Hutcheon and members of his group were involved in establishing collaborations with colleagues at analytical facilities in South Africa, Canada, the United Kingdom  and with the IAEA, to help encourage nuclear forensics efforts.

Hutcheon is survived by his wife of 41 years, Nancy Hutcheon, former education coordinator for summer internships in Physical and Life Sciences; his children, Douglass Hutcheon and Dana Gordon, and hundreds of colleagues in the U.S. and abroad that he mentored and inspired to scientific excellence.