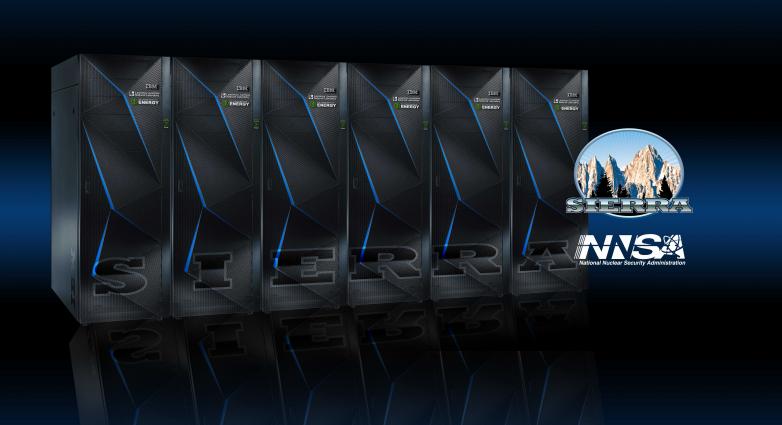 Procurement of Sierra is part of a U.S. Department of Energy (DOE)-sponsored Collaboration of Oak Ridge, Argonne and Lawrence Livermore national labs (CORAL) to accelerate the development of high performance computing (HPC). CORAL will result in delivery to each laboratory of a supercomputer expected to provide about five times the performance of today’s top systems.

CORAL was announced by Energy Secretary Ernest Moniz in a press conference held at DOE headquarters in Washington, D.C. Under the contracts, Livermore and Oak Ridge will work with IBM, NVIDIA and Mellanox to deploy systems of about 150 petaflops to advance science and ensure national security. Argonne is expected to finalize a contract at a later date.

"High performance computing has become an essential tool for our national security mission," LLNL Director Bill Goldstein said."This computer is a step toward keeping the U.S. at the forefront of science and technology, as well as helping to ensure our nation’s safety and security."

"Beginning in 2017, Sierra will be a key tool for the three NNSA laboratories in pursuing predictive applications necessary to sustain the nation’s nuclear deterrent into the indefinite future without underground testing," said Charlie Verdon, LLNL principal associate director for Weapons and Complex Integration. "In particular, the machine will be dedicated to high-resolution weapons science and uncertainty quantification for weapons assessment. This work promises to advance the state of the art in simulation science to the benefit of the larger research community."

"Sierra will allow us to begin laying the groundwork for exascale systems, as the Sierra’s heterogeneous accelerated node architecture represents one of the most promising architectural paths," said Bob Meisner, NNSA head of the ASC program. "Our program’s mission is to advance in tandem both the HPC technologies and the codes we run on these systems in order to best address the complex problems inherent in our national security missions."

Looking to the more distant future, Moniz also announced today funding awards, totaling $100 million, for leading HPC companies to develop exascale computing technologies under the FastForward 2 program managed by LLNL on behalf of NNSA and the DOE Office of Science.

Sierra will be housed in Livermore’s High Performance Computing Complex and serve the ASC program, a cornerstone of NNSA’s stockpile stewardship effort to ensure the safety, security and reliability of the nation’s nuclear deterrent without underground testing.

Sierra also will be used for weapons science and engineering calculations, as opposed to estimating the performance of an integrated system. This kind of work is necessary to understand key issues of physics, the knowledge of which later makes its way into the integrated design codes.  This work has important implications for other national security concerns, including nonproliferation and counterterrorism.

Because of the powerful supercomputing systems it requires to perform its national security missions, NNSA’s charter also is to work with industry and academia to ensure U.S. leadership in HPC and boost the economic competitiveness this computing technology makes possible. To help fulfill this task, Lawrence Livermore created the High Performance Computing Innovation Center (HPCIC)  in its open campus. NNSA also engages top talent in academia through the ASC’s Predictive Simulation Academic Alliance Program.

Finally, Livermore applies its HPC expertise and capabilities to other problems of national and global importance such as: infrastructure protection, energy, medicine, earthquakes and climate change.