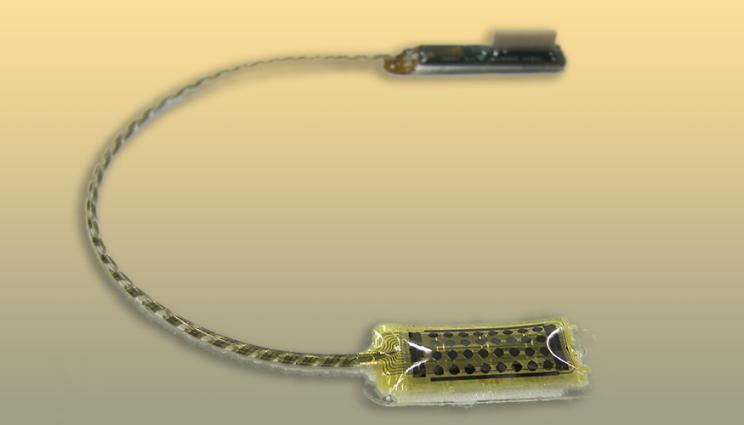 In a recent study by a Lawrence Livermore National Laboratory (LLNL) and University of California, San Francisco team, researchers found that the flexibility of LLNL-developed thin-film microelectrodes, combined with higher-density grid spacing, provides greater levels of detail about how the brain works, while also providing the ability to stimulate areas of the brain affected by epilepsy and other neurological disorders.

Earlier this year, thin-film microgrid arrays developed at Lawrence Livermore National Laboratory (LLNL) and used in neurologist Jon Kleen’s patients at the University of California, San Francisco (UCSF) showed that hippocampal brain activity consisted of waves that traveled bi-directionally during behavioral tasks. These thin-film microgrid arrays are designed not just to sit on the surface of the brain, as they did when measuring the hippocampal brain waves, but are flexible enough to make intimate contact with the topography of the brain’s surface.

More recently, in a paper published in the Journal of Neural Engineering, researchers found that this flexibility, combined with higher-density grid spacing, provides greater levels of detail about how the brain works, while also providing the ability to stimulate areas of the brain affected by epilepsy and other neurological disorders. The paper was authored by UCSF researchers Kristen Sellers, Jason Chung and Heather Dawes of Edward Chang’s lab; and LLNL researchers Jenny Zhou and Michael Triplett, working under Implantable Microsystems Group Lead Razi Haque.

The thin-film micro-electrocorticography surface arrays contain 32 electrodes, and are 1.2 mm in diameter, with a pitch (the distance between their centers) of just 2 mm, providing a higher level of spatial specificity and localization than commercial electrode arrays. Because the thin-film arrays’ flexibility and size have the potential for adding dozens more electrodes to an array, the authors argue that the manufacturing and assembly approach described shows great promise for acquiring unique information that will allow for customizable, refined spatial targeting of different areas of the brain — with implications for clinical and research applications, including intracranial stimulation.

“Close collaboration between UCSF and LLNL allows for rapid cycles of design iterations and intraoperative testing, elucidating what features of the arrays can be optimized to better measure and understand brain activity,” Sellers noted.

LLNL’s microfabrication method distinguishes these thin-film arrays from their commercial counterparts: they are formed via a 2.5D process wherein flat layers of materials — in this case polymers and metals — are deposited according to a pattern and then etched to define their final form as functional devices. Because many small, thin-film electrodes can be made at once through this production technique, they are essentially identical, so that according to the authors, “they exhibit excellent electrode-to-electrode and device-to-device consistency,” which provides increased precision both in sensing and targeting the different brain areas being studied.

The researchers’ data suggests that the new thin-film arrays transmit higher-quality signals than their commercial counterparts, in part because added flexibility helps the electrode better conform to the brain’s cortex, establishing more intimate contact between the brain and the array so that neural activity is more readily transmitted between the two. Likewise, transmission is aided by the thin-film's uniform stiffness, attributable to the metal conductors in the electrodes being evenly distributed rather than interspersed in bulk-metal form, which in commercial arrays contributes to the variable and more extreme stiffness that prevents them from lying flat on the surface of the brain. According to researchers, the flexibility that allows better contact with the cortex also allows the array to be molded into a cylindrical shape so that it can be inserted into the brain.

To assess the comparative abilities of commercial electrode arrays versus the thin-film arrays, researchers collected data from four patients with refractory seizures who were preparing to undergo surgery to manage temporal lobe epilepsy.

Surface arrays of 32-electrodes were placed on three patients for testing, and the cylindrical depth arrays — also with 32 contacts — were tested in three patients. Experimenters found that “signals between adjacent contacts in the same row or column of the surface array, with 2 mm pitch, had correlation coefficients lower than 1, indicating that even during highly correlated resting-state activity, this density of electrodes recorded unique information.”

To test whether an even higher density of electrodes would yield more information, the authors compared nearer and further spaced electrodes in the surface arrays (adjacent versus diagonally situated pairs) and found that the differences were significant. Researchers concluded that future studies may provide new information from more tightly arranged surface arrays. A similar analysis among depth arrays also showed that a significant amount of new information was recorded when the depth pitch of the array was adjusted — electrodes inserted deeper into the brain provided different information than adjacent electrodes at less depth.

While a variety of considerations, such as individual brain differences, may influence electrical stimulation response, the results suggest that the thin-film electrodes’ size does generally allow for more granular data and better targeted tissue stimulation. As the authors put it, “Our intraoperative sense and stimulation studies conducted in four human patients demonstrated that these higher density arrays provided additional sensed information and greater control over the spatial spread of stimulation.” Researchers considered the findings significant because the use of electrocorticography for diagnostic purposes and therapeutic stimulation has been impeded by the large size (and corresponding lower density) of commercial electrodes. Microfabrication of thin-film electrode arrays can address these scalability issues, as the paper argues.

The work is the culmination of years-long efforts that are part of DARPA’s (Defense Advanced Research Projects Agency) SUBNETS (Systems-Based Neurotechnology for Emerging Therapies) program, originally created to study mood disorders like post-traumatic stress disorder (PTSD), depression and anxiety, as well as chronic pain. This research contributes to the long term goals of the SUBNETS program by contributing to a “closed-loop” approach to therapeutics — one in which therapeutic neural stimulation is triggered only when needed rather than being “on” all the time, as in an open-loop system. Open-loop systems can become ineffective over time, as the brain acclimates to the stimulus, and side effects are more common in the open-loop approach, according to Haque. The implantable arrays described in the paper allow for customization, which can better accommodate and treat individual needs, like those intended for research under SUBNETS funding.