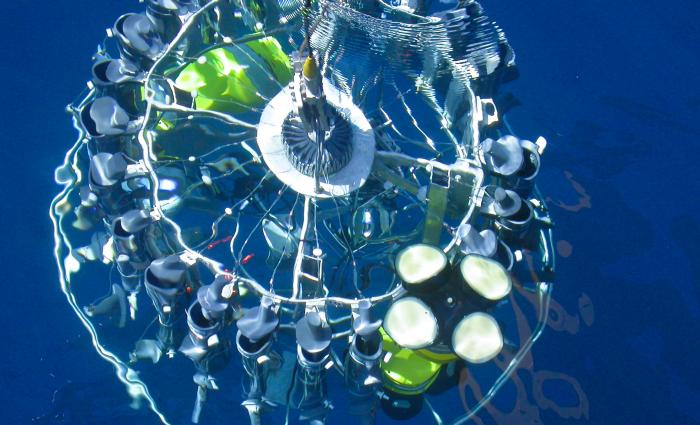 Lined with bottles triggered at different levels of the ocean, this conductivity, temperature and depth profiler bearing a suite of sampling bottles is a mainstay of oceanography. It can be deployed to depths of 6,000 meters to study changes in ocean temperature and salinity. Photo courtesy of Ann Thresher/CSIRO.

"By using long-term observed estimates of ocean salinity and temperature changes across the globe, and contrasting these with model simulations, we have uncovered the unexpectedly large influence of salinity changes on ocean basin-scale sea level patterns," said LLNL oceanographer Paul Durack, lead author of a paper appearing in the November issue of the journal Environmental Research Letters.

Sea level changes are one of the most pronounced effects of climate change impacts on the Earth and are primarily driven by warming of the global ocean along with added water from melting land-based glaciers and ice sheets. In addition to these effects, changes in ocean salinity also can affect the height of the sea, by changing its density structure from the surface to the bottom of the ocean.

"By contrasting two long-term estimates of sea level change to simulations provided from a large suite of climate model simulations, our results suggest that salinity has a profound effect on regional sea level change," Durack said. "This conclusion suggests that future sea level change assessments must consider the regional impacts of salinity-driven changes; this effect is too large to continue to ignore."

Other collaborators include LLNL’s Peter Gleckler, along with Susan Wijffels, an oceanographer from Australia’s Commonwealth Scientific and Industrial Research Organization (CSIRO). The study was conducted as part of the Climate Research Program at Lawrence Livermore National Laboratory through the Program for Climate Model Diagnosis and Intercomparison, which is funded by the Department of Energy’s Regional and Global Climate Modeling Program.