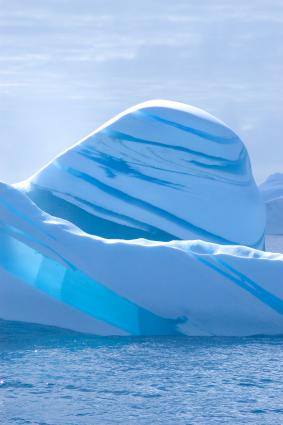 The Antarctic Ocean is a remote place where icebergs frequently drift off the Antarctic coast and can be seen during their various stages of melting. This iceberg, sighted off the Amery Ice Shelf, also has bands of translucent blue ice formed by sea or freshwater freezing in bands between layers of more compressed and white glacial ice. Image by Andrew Meijers/BAS 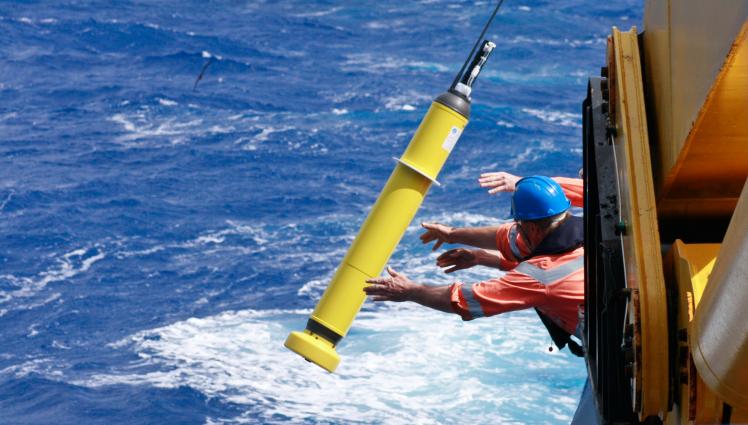 Akin to having a fleet of miniature research vessels, the global flotilla of more than 3,600 robotic profiling floats provides crucial information on upper layers of the world's ocean currents. Photo by Alicia Navidad/CSIRO.

LIVERMORE, California -- Using satellite observations and a large suite of climate models, Lawrence Livermore scientists have found that long-term ocean warming in the upper 700 meters of Southern Hemisphere oceans has likely been underestimated.

"This underestimation is a result of poor sampling prior to the last decade and limitations of the analysis methods that conservatively estimated temperature changes in data-??sparse regions," said LLNL oceanographer Paul Durack, lead author of apaper appearingin the October 5 issue of the journal Nature Climate Change.

Ocean heat storage is important because it accounts for more than 90 percent of the Earth's excess heat that is associated with global warming. The observed ocean and atmosphere warming is a result of continuing greenhouse gas emissions. The Southern Hemisphere oceans make up 60 percent of the world's oceans.

Since 2004, automated profiling floats (named Argo) have been used to measure global ocean temperatures from the surface down to 2,000 meters. The 3,600 Argo floats currently observing the global ocean provide systematic coverage of the Southern Hemisphere for the first time. Argo float measurements over the last decade, as well as data from earlier measurements, show that the ocean has been gradually warming, according to Durack.

"Prior to 2004, research has been very limited by the poor measurement coverage," he said. "By using satellite data, along with a large suite of climate model simulations, our results suggest that global ocean warming has been underestimated by 24 to 58 percent. The conclusion that warming has been underestimated agrees with previous studies, however it's the first time that scientists have tried to estimate how much heat we've missed."

Given that most of the excess heat associated with global warming is in the oceans, this study has important implications for how scientists view the Earth's overall energy budget, Durack said.

The new results are consistent withanother new paperthat appears in the same issue of Nature Climate Change. Co-author Felix Landerer of NASA's Jet Propulsion Laboratory, who contributed to both studies, says, "Our other new study on deep-ocean warming found that from 2005 to the present, Argo measurements recorded a continuing warming of the upper-ocean. Using the latest available observations, we're able to show that this upper-ocean warming and satellite measurements are consistent."

Other Livermore authors include Peter Gleckler and Karl Taylor. The study was conducted as part of the Climate Research Program at Lawrence Livermore, which is funded by the Department of Energy's Regional and Global Climate Modeling Program. Work at NASA is a part of the newly formed NASA Sea Level Change Team (N-SCLT) and is supported by a NASA ROSES Physical Oceanography grant.