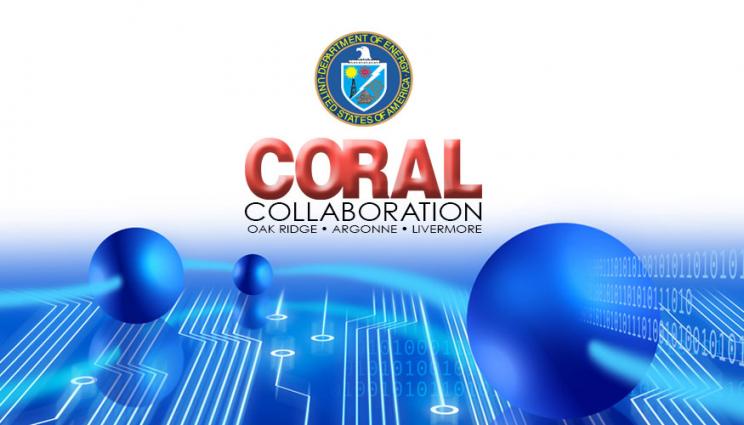 Lawrence Livermore has joined forces with two other DOE national labs: Oak Ridge and Argonne. The collaboration will deliver next generation supercomputers that will be about 10 times faster than today's most powerful high performance computing systems.

Livermore joins with Oak Ridge and Argonne to develop next supercomputers

Don Johnston, johnston19 [at] llnl.gov, 925-423-4902
The Lab has joined forces with two other national labs to deliver next generation supercomputers able to perform up to 200 peak petaflops (quadrillions of floating point operations per second), about 10 times faster than today's most powerful high performance computing (HPC) systems.

The Collaboration of Oak Ridge, Argonne and Livermore (CORAL) national labs will produce systems in the 2017-2018 timeframe to support the research missions at their respective institutions. At LLNL, the system will serve NNSA's Advanced Simulation and Computing (ASC ) program in support of stockpile stewardship.

CORAL is an important step in the development of the exascale systems needed to take on complex scientific problems -- such as global climate and weather modeling -- that today's top HPC machines cannot address with sufficient resolution. Such HPC systems are a cornerstone of the nation's' effort to ensure the safety, security and reliability of the nation's aging nuclear deterrent as well as other national security challenges. The first well-balanced and power efficient exascale systems are expected before 2025, assuming the country embarks on an exascale initiative. It is possible, however, that inefficient systems could appear as early as 2020 somewhere in the world. A joint Request for Proposals for the CORAL procurement was issued Jan. 6 and responses were submitted Feb. 18. These are now being evaluated. The intention is that CORAL partners will select two different vendors and procure a total of three systems, two from one vendor and one from the other. Livermore is leading the procurement process.

Livermore's system, to be called Sierra, will be best suited to support the applications critical to stockpile stewardship. Oak Ridge and Argonne will employ systems that meet the needs of their DOE Office of Science missions under the Advanced Scientific Computing Research (ASCR) program. Because of the technological advances required for CORAL systems, a "deliberate and strategic" investment plan is an integral part of the collaboration. Consequently, CORAL includes targeted investment in "non-recurring engineering" (NRE) research and development contracts.

The R&D contracts also help address the technological challenges of developing new systems, such as containing power requirements; ensuring memory bandwidth is sufficient to give scientists the full benefit of the machine's computing power; and making sure the system is reliable and resilient given the machine's many components.