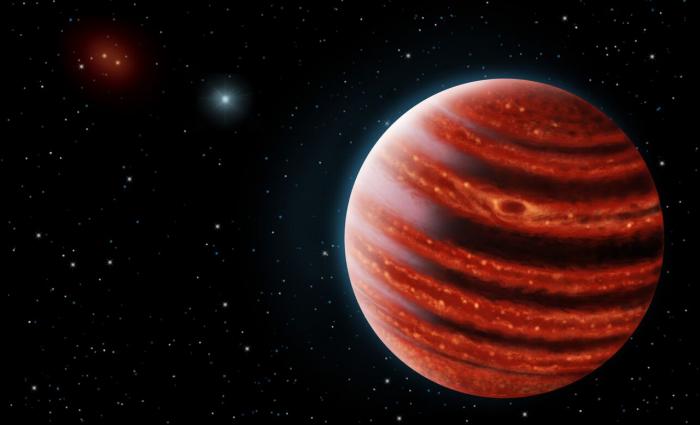 An artistic conception of the Jupiter-like exoplanet, 51 Eri b, seen in the near-infrared light that shows the hot layers glowing through clouds. Because of its young age, this young cousin of Jupiter is still hot and carries information on the way it was formed 20 million years ago. Image by Danielle Futselaar & Franck Marchis/SETI Institute.

For the first time, Lawrence Livermore scientists, as part of an international team, have discovered the most Jupiter-like planet ever seen in a young star system, lending clues to understanding how planets formed around our sun.

Using a new advanced adaptive optics device on the Gemini Planet Imager (GPI) on the Gemini South Telescope in Chile, the team took an image of the planet, which is about twice the size of Jupiter. 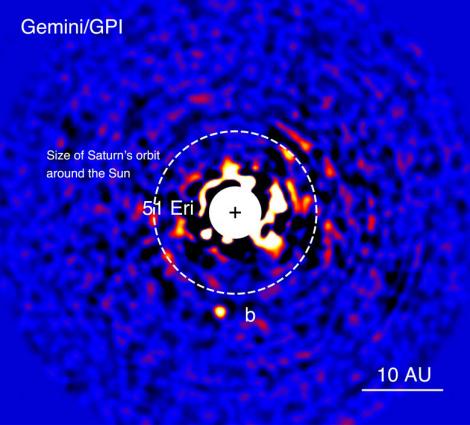 Called 51 Eridani b, the planet is the first in a wave of discoveries by a new generation of planet-hunting instruments, and could help scientists unlock the secrets of how Jupiter and other gas giants form and shape their planetary systems. It is a million times fainter than its star and shows the strongest methane signature ever detected on an alien planet, which should yield additional clues as to how the planet formed.

Since a planet’s luminosity is a function of age and mass and initial conditions, it can provide insights into its formation, according to Bruce Macintosh of Stanford University, Lawrence Livermore National Laboratory and lead author on a paper appearing in the Aug. 14 edition of the journal, Science.

"Many of the exoplanets astronomers have imaged before have atmospheres that look like very cool stars" said Macintosh, who led the construction of GPI and now leads the planet-hunting survey. "This one looks like a planet."

The Gemini Planet Imager (GPI) was designed specifically for discovering and analyzing faint, young planets orbiting bright stars. After GPI was installed, the team set out to look for planets orbiting young stars. They’ve looked at almost 100 stars so far. "This is exactly the kind of planet we envisioned discovering when we designed GPI," said James Graham, professor at UC Berkeley and GPI project scientist.

According to the cosmic clock, 51 Eridani is a young star — only 20 million years old — and this is exactly what made the direct detection of the planet possible. When planets coalesce, material falling into the planet releases energy and heats it up. Over the next 100 million years these planets radiate that energy away, mostly as infrared light.

Once the astronomers zeroed in on the star, they blocked its light and spotted 51 Eri b orbiting a little farther away from its parent star than Saturn does from the sun. The light from the planet is very faint — more than one million times fainter than its star – but GPI can see it clearly. Observations revealed that it is roughly twice the mass of Jupiter. Other directly imaged planets are five times the mass of Jupiter or more. In addition to being the lowest-mass planet ever imaged, it's also the coldest — about 800 degrees Fahrenheit — and features the strongest atmospheric methane signal on record. Previous Jupiter-like exoplanets have shown only faint traces of methane, far different from the heavy methane atmospheres of the gas giants in our solar system.

All of these characteristics, the researchers say, point to a planet that is very much what models suggest Jupiter was like in its infancy.

LLNL was responsible for the advanced optics system, one of the most advanced in the world. Designed to be the world's "most sophisticated" astronomical system for compensating turbulence in the Earth's atmosphere — an ongoing problem for ground-based telescopes — the system senses atmospheric turbulence and corrects it with a 2-centimeter-square deformable mirror with 4,000 actuators. Together with the other parts of GPI, astronomers can directly image extra-solar planets that are 1 million times fainter than their host stars.

Livermore researchers include Lisa Poyneer, David Palmer, Brian Bauman and Mark Ammons. During the GPI development phase, Palmer was project manager for GPI, led the adaptive optics development effort and designed and built the real-time computer that controls the AO system. Poyneer developed advanced algorithms and led adaptive optics system testing in the laboratory and at the telescope. Bauman created GPI’s innovative and compact AO optical design. Ammons, an astrophysicist, is a member of the GPI Exoplanet Survey science team and contributes to GPI observations and data analysis.

Among GPI's advanced adaptive optics features is the ability to selectively correct vibrations, even at high frequencies. During observations of 51 Eridani in January, a new source of vibration significantly reduced image quality. "The GPIES astronomers contacted us immediately. We designed and tested a new filter that solved the problem in time for the next night's observations" Poyneer said.

And the LLNL team continues to fine tune GPI and other instruments at Gemini. "Here at LLNL, we are building a new optical component for the Gemini Observatory that will, for the first time, directly measure the masses of GPI exoplanets," Ammons said.

LLNL's scientific involvement and technical support of the Gemini Planet Imager is led by Ammons and funded by the Laboratory Directed Research and Development program.