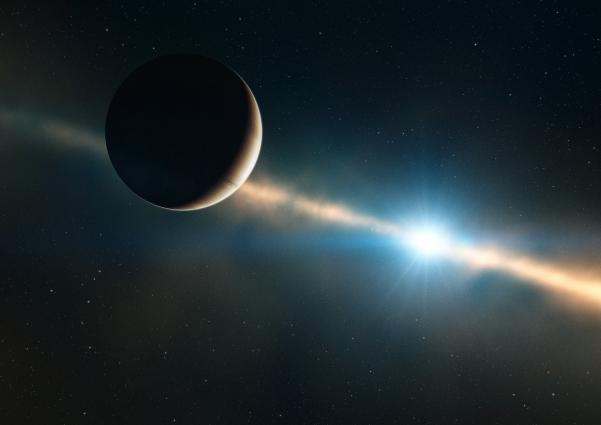 LLNL researchers and international collaborators have refined estimates of the orbit and size of the exoplanet Beta Pictoris b. 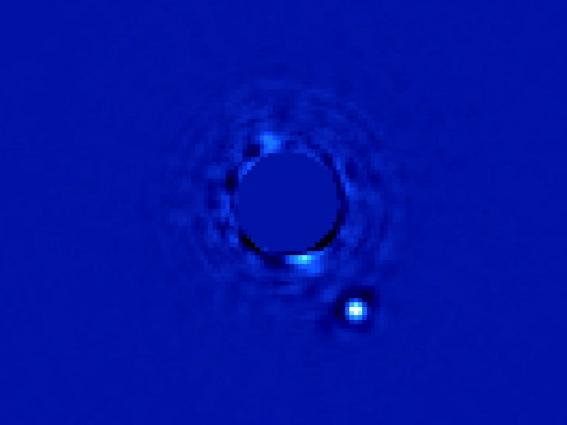 The Gemini Planet Imager captured this first light image of Beta Pictoris b, a planet orbiting the star Beta Pictoris. The star, Beta Pictoris, is blocked in this image by a mask so its light doesn't interfere with the light of the planet.

Using one of the world's largest telescopes, a Lawrence Livermore team and international collaborators have tracked the orbit of a planet at least four times the size of Jupiter.

The scientists were able to identify the orbit of the exoplanet, Beta Pictoris b, which sits 63 light years from our solar system, by using the Gemini Planet Imager's (GPI) next-generation, high-contrast adaptive optics (AO) system. This approach is sometimes referred to as extreme AO.

The Gemini Planet Imager snapped an amazingly clear and bright image of the gas giant Beta Pictoris b after an exposure of just one minute.

By using a series of these images and calibrating the AO system and camera, researchers were able to refine the estimate of the planet's orbit by looking at the two disks around its parent star. Disks, which are made up of dense gas and debris, surroundyoung newly formed stars. The team observed that the planet is not aligned with Beta Pictoris' (its star's) main debris disk but is aligned to and potentially interacting with an inner warped component disk.

"Our goal is to understand how these planetary systems have developed," said Lisa Poyneer, one of the lead Lawrence Livermore authors of a paper appearing in a recent edition of the journal, Proceedings of the National Academy of Sciences."If Beta Pictoris b is warping the disk, that helps us see how the planet-forming disk in our own solar system might have evolved long ago."

Furthermore, the team predicts that there is a small chance that the planet will "transit," that is, partially block its star, as seen from Earth in late 2017. This would allow a very precise measurement of the planet's size. Poyneer concludes: "GPI also measures the planet's spectrum, and hence chemical composition. Knowing what it is made of and how big it is will help us figure out how it formed."

For the past decade, Lawrence Livermore has been leading a multi-institutional team in the design, engineering, building and optimization of GPI, which is used for high-contrast imaging to better study faint planets or dusty disks next to bright stars. Astronomers -- including a team at LLNL-- have made direct images of a handful of extrasolar planets by adapting astronomical cameras built for other purposes. GPI is the first fully optimized planet imager, designed from the ground up for exoplanet imaging and deployed on one of the world's biggest telescopes, the 8-meter Gemini South telescope in Chile.

Poyneer said the team is assessing how the AO system is performing and making adjustments as necessary so that it can image even more exoplanets. "The system is functioning very well and enabling new science already, but we're further improving its performance," she said.

Other Livermore scientists include Bruce Macintosh, now at Stanford University, Brian Bauman and David Palmer. The research appears in the May 12 online edition of PNAS.