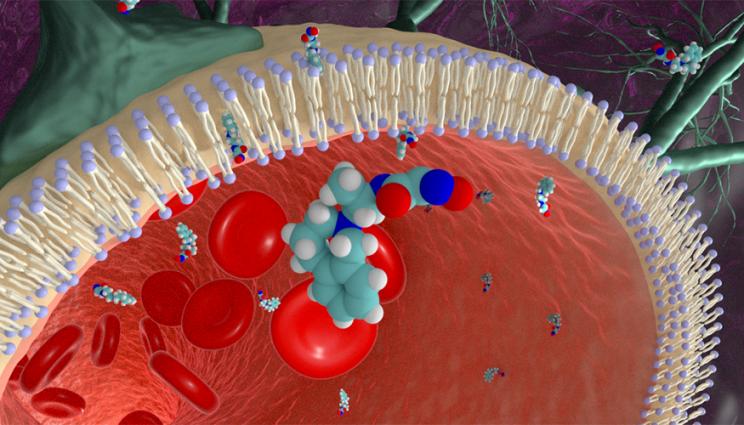 Scientists at Lawrence Livermore National Laboratory (LLNL) have developed a new, versatile antidote to counteract exposure to nerve agent poisoning. The work, appearing in the journal Scientific Reports, was the result of a highly iterative process built in collaboration between LLNL’s Global Security Directorate, its Forensic Science Center and the U.S. Army Medical Research Institute of Chemical Defense (USAMRICD).

Chemical weapon nerve agents like Sarin or Novichok typically function by blocking the transmission of messages from the central nervous system (CNS), composed of the brain and the spinal cord, to the peripheral nervous system (PNS), which controls many processes, including respiration. The brain’s natural protection — the blood-brain barrier (BBB) — has long been a major obstacle to the development of effective nerve agent antidotes, which historically only protect against damage to the PNS because they cannot cross the BBB.

After the most promising compounds were identified using a parallel effort involving computational modeling and medicinal chemistry, the best candidates were evaluated in several biochemical assays, resulting in the discovery of LLNL-02. LLNL-02 was found to protect both the CNS and the PNS against the effects of the nerve agent Sarin. LLNL-02 is the first antidote of its kind, as it does cross the BBB to confer protection to the brain.

“The process was extremely challenging — most of the synthesized compounds, upon biochemical evaluation, were found to either effectively cross the BBB models but were not effective, or vice-versa,” said corresponding author Carlos Valdez and LLNL lead chemist of the project. “I will go so far as calling [LLNL-02] a needle in a haystack and we were ecstatic to find it when we did. It was quite an accomplishment by our team.”

After two years of laboratory and computational testing, LLNL-02 was shown to be nontoxic to human cell lines in biochemical assays conducted at the USAMRICD. The next step was to evaluate LLNL-02 in an animal model. “It worked as well as the ‘gold standard’ antidote that the U.S. Army currently uses,” Valdez said.

Research continues into LLNL-02’s effectiveness against VX and newer agents like the Novichoks, most notably used in the assassination attempts of Sergei Skripal and his daughter in 2018 in the U.K., and of Alexei Navalny in 2020.

“These people were lucky they were able to be rushed to a hospital and kept alive until their bodies were able to properly deal with the agent,” Valdez said. “This is what we’re looking forward to seeing now — if LLNL-02 has some protective activity that goes beyond Sarin.”

“The results show that LLNL’s unique collection of facilities and scientific talent is pushing the boundaries of what’s possible,” said Audrey Williams, director of LLNL’s Forensic Science Center. “LLNL-02 is a promising and versatile compound built by a unique process that demonstrates a path forward for protecting victims of bioterrorism and chemical weapons.”

The work was funded by the Defense Threat Reduction Agency Chemical and Biological Technologies Department.