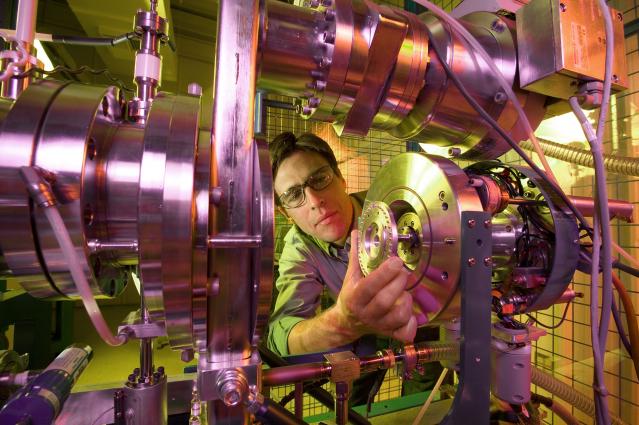 Ted Ognibene loads a sample in the NEC 1 MV Tandem Accelerator at the Center for Accelerator Mass Spectrometry (CAMS). This accelerator is used mainly for biological research. See related article, 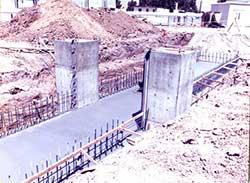 In July of 1986 ground was broken for the newly designated Bldg. 190-542 physics laboratory that would house the AMS facility. This photo shows the sub-basement (trench) and support columns for the incoming accelerator.

The plastic pink flamingos found on lawns around the nation has become an unofficial mascot for the Center for Accelerator Mass Spectrometry at Lawrence Livermore.

From developing the first accelerator mass spectrometer for use in the biology field to tracking radionuclides from the Dai-ichi Nuclear Power Plant disaster, the Laboratory's Center for Accelerator Mass Spectrometry (CAMS) has spent 25 years in the spotlight of not only dating ancient artifacts but solving global challenges.

CAMS is celebrating its 25th anniversary this Thursday (July 25) with a symposium featuring guest speakers and CAMS researchers discussing the past, current scientific achievements and future directions.

CAMS was literally built from the ground up after a group of the Laboratory's nuclear physicists decided that they wanted to do applied work as opposed to theoretical research. To put it simply, CAMS is used to count atoms. For example, carbon 14 disappears at a known rate (decays) because it is radioactive. So the age of anything containing carbon can be determined by counting the number of atoms remaining. All living materials contain carbon.

"When you looked at this tool, it was as though you discovered radiation for the first time," said Jay Davis, who as head of the Laboratory's nuclear physics division at the time of CAMS' development, was instrumental in getting the facility built and served as its first director. "We were able to dynamite it across the disciplinary lines like only a national laboratory could."

The development of CAMS culminated in 1985, when five groups agreed to provide financial support for the construction of the "Multi-User Tandem Laboratory" and as equal partners had rights of first refusal in the use of the facility. The five groups were: Lawrence Livermore's Physics Department, the University of California Regents, Sandia National Laboratory and Lawrence Livermore's R Program and Nuclear Chemistry division. The facility officially opened in 1989. Since its inception, CAMS has performed more than 25,000 accelerator mass spectrometry (AMS) measurements per year and is the world's most versatile and productive AMS facility.

"Over this period, there has been a complete turnover in staff while maintaining the original energy, creativity and dedication to community support envisioned by its founders," said Graham Bench, the current CAMS director.

Elements routinely analyzed at CAMS include hydrogen, beryllium, calcium, carbon, aluminum, chlorine, iodine, uranium and plutonium. However, scientists are developing techniques to also identify and analyze isotopes of nickel, strontium, technetium, neptunium and americium. In fact, CAMS actinide capabilities include a suite of isotopes of uranium, neptunium and plutonium relevant to national security and biological studies.

CAMS was the first AMS facility to do biological work. It started with Davis who used Laboratory Directed Research and Development funds to conduct research into how nutrients and drugs travel through the human body to determine what is absorbed and what is excreted . "We were the first big accelerator that hadn't been converted to do AMS but was built specifically for AMS," Davis said.

What's with the flamingos?

Anyone who visits CAMS is quick to notice the plastic pink flamingos around the facility, a sort of unofficial mascot. What started as a practical joke on a CAMS researcher when his colleagues placed the plastic birds all over his lawn when he returned from a trip to the tropics turned into CAMS tradition. On occasion, the flamingos return on someone else's lawn including its first director: In July 1991, when Davis returned from his first inspection tour in Iraq for the United Nations, he found a flamingo wearing a burnoose perched on the CAMS sign outside the office building. "CAMS had been set up as a pretty independent and freewheeling group, so the pursuit of evermore examples of the ultimate symbol of kitsch and bad taste became obligatory," he said. "Today, postdocs and visitors come to CAMS with gifts of flamingo-inspired clocks, dolls, wall hangings, garden ornaments, pillows, etc."

The flamingos remained long after Davis' departure and now are found on CAMS coffee mugs and pens. Pink flamingo stuffed animals and blow-ups progressed into a menagerie - from inflatable gorillas to the character from artist Edvard Munch's "The Scream" sitting on top of some of the CAMS equipment.

"We take pride in being different," Knezovich said. "The culture at CAMS is pushing the scientific envelope and debating science, but you have to do it with a sense of humor."

CAMS is a postdoc magnet, and Bench is something of a poster child of CAMS postdocs. In 1990, he came to CAMS to give a talk as a graduate student. By December of 1991 he was an official CAMS postdoc, and the rest is history as he sits at the helm of CAMS.

CAMS is a place where a new postdoc can come in and use a world-class instrument and "he or she will be on the top of their field in 18 months," Davis said. He said more than 200 students did their thesis work at CAMS.

"CAMS is well appreciated as a unique organization whose creative and innovative staff play a role in multiple research areas and programs," Bench said.