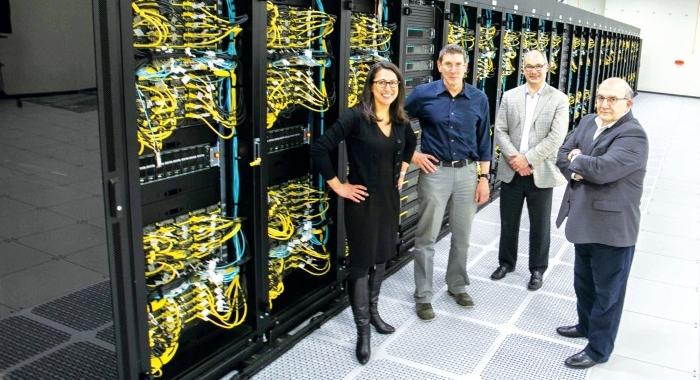 The Cancer Moonshot is a new national effort to double the rate of progress - to make a decade's worth of advances in cancer prevention, diagnosis, treatment and care in five years - and to ultimately end cancer.

During the summit, the Department of Energy (DOE) launched three new pilot projects focused on bringing together nearly 100 cancer researchers, care providers, computer scientists and engineers to apply the nation's most advanced supercomputing capabilities to analyze data from preclinical models in cancer, molecular interaction data and cancer surveillance data across four DOE national laboratories. The Collaboration of Oak Ridge, Argonne and Livermore (CORAL) supercomputing, led by Lawrence Livermore, which is typically used for stockpile stewardship, will be applied to biology to refine the understanding of the mechanisms leading to cancer development and accelerating the development of promising therapies that are more effective and less toxic.

The Biological Applications of Advanced Strategic Computing, or BAASiC, is a multi-institution initiative, led by LLNL. Partners across academia, industry and government share the common vision to enable a revolutionary approach to improve biological understanding, human health and biosecurity through application of advanced computational technology -- bringing together large-scale simulation, deep analysis of complex and diverse data and new targeted sensor and measurement technologies.

DOE and Veterans Affairs are collaborating to apply the most powerful computational assets at the national labs, including Lawrence Livermore, to nearly a half million veterans’ records from one the world largest research cohorts, the Million Veteran Program, a cornerstone of the president’s Precision Medicine Initiative.

DOE, the National Cancer Institute (NCI) and GlaxoSmithKline also announced a new public-private partnership designed to harness high-performance computing and diverse biological data to accelerate the drug discovery process and bring new cancer therapies from target to first in human trials in under one year.

Scientists from NCI and national lab researchers from Argonne, Lawrence Livermore, Los Alamos and Oak Ridge, who are part of the Exascale Computing Initiative and the National Strategic Computing Initiative, have been working for nearly two years to produce a plan to use large-scale computing to impact cancer science and, eventually, cancer treatment.

During the summit, participants were asked to address provocative questions about how the entire cancer system operates and how individuals and organizations can take action to change the status quo to advance progress for patients, with the goal of developing additional actions to be announced through the remainder of 2016 and beyond.

This was the first time a group this expansive and diverse met under a government charge to double the rate of progress in the understanding, prevention, diagnosis, treatment and care of cancer.

There were a limited number of speakers and the summit was instead focused on smaller-group interactions, collaborations and networking.

In January, President Obama signed a Presidential Memorandum establishing a first-of-its-kind federal task force to end cancer as we know it. The Task Force, chaired by Biden, is comprised of leaders from every federal agency that has a part to play in addressing cancer. The administration also announced a new $1 billion initiative to jumpstart he Cancer Moonshot.

"The Moonshot cannot be achieved by one person, one organization, one discipline or even one collective approach," Vice President Biden said. "Solving the complexities of cancer will require the formation of new alliances to defy the bounds of innovation and accelerate the prevention, diagnosis, treatment and  - ultimately -  a cure. It’s going to require millions of Americans speaking up and contributing what they’re able. That’s what the Cancer Moonshot Summit is all about."

The attendees at the Cancer Moonshot Summit in Washington, D.C. are leaders representing the entire cancer community and beyond, including researchers, oncologists, nurses and other care providers, data and technology experts, philanthropists, advocates, patients and survivors. They are among the best-positioned individuals and organizations to discuss how cancer affects them, share input for the Cancer Moonshot, generate ideas about how individuals and organizations can better engage in the national effort and create ideas for new collaborations and actions.