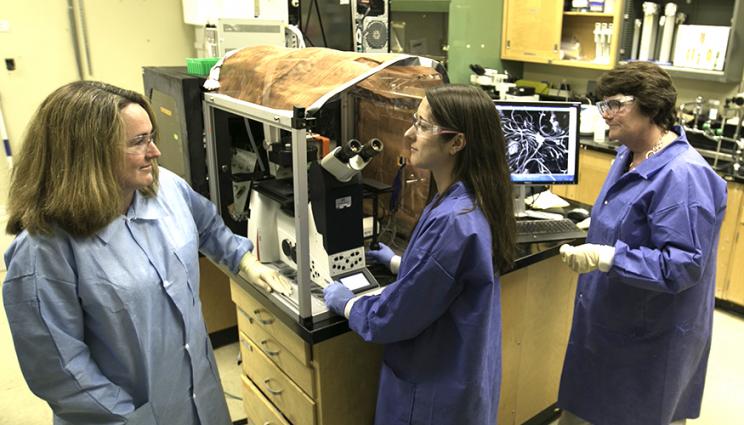 The study, part of a project known as iCHIP (in-vitro Chip-Based Human Investigational Platform), was recently published online in the journal Analyst. The paper describes the integration of primary human dorsal root ganglia (DRG) cells and glial cells onto a microfluidics chip with embedded electrodes, and the successful testing of several chemicals on the living cells over a period of up to 23 days.

Ultimately, scientists say the research will provide a non-invasive testing platform outside the human body that will predict human exposure to drugs and toxins more accurately than animal studies.

"It’s a platform for testing low-level chronic exposure to chemicals, for therapeutic drug screening and testing of environmental contaminants in cases where we can’t test directly in humans," said the paper’s lead author and LLNL scientist, Heather Enright. "This is a way to get human-relevant data without using animals; especially since those results don’t always extrapolate to humans."

During the study, the team repeatedly exposed human DRG neurons and glial cells to capsaicin, a chemical found in chili peppers, ATP (a neuron receptor activator) and potassium chloride. The neural responses to the chemicals were recorded and compared to other reports of similar interactions found in the scientific literature to validate the platform.

Unlike the traditional method of studying neural cells known as "patch clamping," in which individual cells are punctured by specialized pipettes and killed, a chip-based platform can be used to measure chronic exposures, by non-invasively and repeatedly measuring the same cell population over time.

"You can look at different kinds of cells at the same time and couple them with other assays," Enright said. "It gives you more options to get additional data."

In humans, DRG cells are located along the spinal nerves and house the cell bodies for neurons with receptors activated by mechanical, thermal, chemical and noxious stimuli, making them a model system for studying pain, the team explained.

"A lot of diseases like diabetes and cancer therapeutics cause chronic pain and it’s hard to develop drugs to combat those symptoms," said iCHIP lead biologist Kris Kulp, deputy division leader for LLNL’s Biology and Biotechnology Division. "(iCHIP) is a good way to do that."

iCHIP principal investigator Elizabeth Wheeler said the team would continue to recapitulate different tissues of the body in order to better understand pain mechanisms and other cell/chemical interactions.

To view the paper online, visit the web.