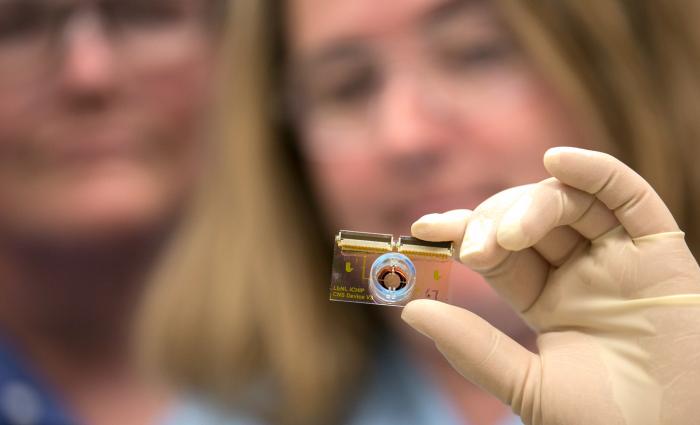 A team of scientists and engineers at Lawrence Livermore National Laboratory is developing “human-on-a-chip,” a miniature external replication of the human body, integrating biology and engineering with a combination of microfluidics and multi-electrode arrays. Photos by Julie Russell/LLNL

Development of new prescription drugs and antidotes to toxins currently relies extensively on animal testing in the early stages of development, which is not only expensive and time consuming, it can give scientists inaccurate data about how humans will respond to such agents.

But what if researchers could predict the impacts of potentially harmful chemicals, viruses or drugs on human beings without resorting to animal or even human test subjects?

To help achieve that, a team of scientists and engineers at Lawrence Livermore National Laboratory is developing a "human-on-a-chip," a miniature external replication of the human body, integrating biology and engineering with a combination of microfluidics and multi-electrode arrays.

"It’s a testing platform for exposure to agents whose effects are unknown to humans," said LLNL engineer Dave Soscia, who co-leads development of the "brain-on-a-chip" device used to simulate the central nervous system. "If you have a system that is engineered to more closely replicate the human environment, you can skip over the really lengthy process of animal testing, which doesn’t necessarily give us information relevant to humans."

The iCHIP team is focusing its efforts on the brain, where they’re looking to understand how neurons interact with each other and react to chemical stimuli such as caffeine, atropine (a drug used to treat poisonings and cardiac arrest) and capsaicin, the compound that gives chili peppers their hotness, as well as real chemical agents in the Lab’s Forensic Science Center. 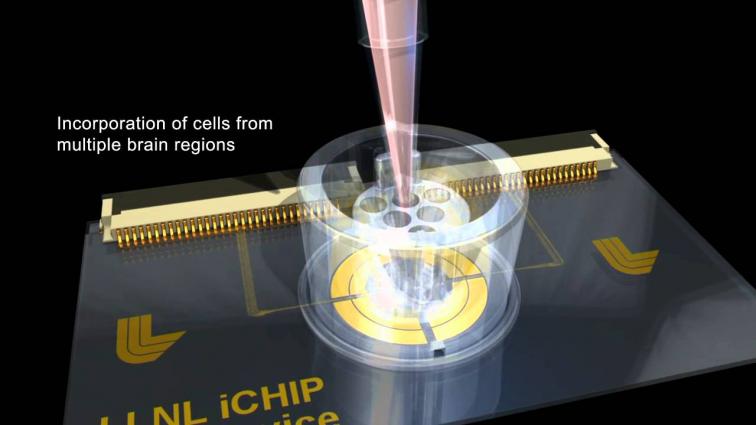 Unique to the iCHIP platform is combining multiple brain types on the same device without barriers between those regions. To study the brain, primary neurons are funneled or "seeded" onto a microelectrode array device, which can accommodate up to four brain regions (such as the hippocampus, thalamus, basal ganglia and cortices). After the cells grow, a chemical (atropine for example) is introduced and the electrical activity from the neurons is recorded.

"The idea is that we can look at network-wide effects across different brain regions," Soscia said. "It adds a level of complexity that has never been done before."

Preliminary results have shown that hippocampal and cortical cells can survive on the chip for several months while their responses are recorded and analyzed, Soscia said.

Filtering out chemicals and toxins before they reach the central nervous system in the body is accomplished by the blood-brain barrier, which is being reproduced by a team led by LLNL engineer Monica Moya. The device uses tubes and microfluidic chips to simulate blood flow through the brain. Moya and her team are testing the device with caffeine and other agents to ensure the system is performing and the cells are reacting as they would in a human body.

The blood brain barrier is the brain’s gatekeeper, allowing nutrients to enter in the brain from the blood flow while keeping out potential toxins. It works so well that it unfortunately can also block potentially useful therapeutics to the central nervous system," Moya said. "Having a realistic human lab model of the blood-brain barrier will help researchers study the barrier’s permeability and be incredibly useful as an in vitro model for drug development."

The iCHIP research, Moya said, could have implications for creating new drugs to fight cancer, vaccines or evaluating the efficacy of countermeasures against biowarfare agents. 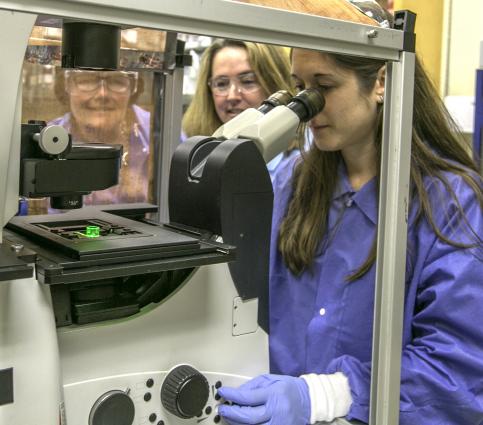 Lab scientist Heather Enright is leading research into the peripheral nervous system (PNS), which connects the brain to the limbs and organs. The PNS device has arrays of microelectrodes embedded on glass, where primary human dorsal root ganglion (DRG) neurons are seeded. Chemical stimuli such as capsaicin (to study pain response) then flow through a microfluidic cap to stimulate the cells on the platform.

The microelectrodes record electrical signals from the cells, allowing researchers to determine how the cells are responding to the stimuli non-invasively. Microscopic images can be acquired at the same time to monitor changes in intracellular ion concentrations, such as calcium. This platform is the first to demonstrate that long-term culture and chemical interrogation of primary human DRG neurons on microelectrode arrays is possible, presenting researchers with an advantage over current techniques.

"Traditionally, electrophysiology studies are done with patch clamping, where the cell is perforated and damaged," Enright said. "A multi-electrode array approach, like that used on iCHIP, really allows you to interrogate the cells over multiple trials so we can maximize the data we get from them. This is especially important when testing rare primary human cells. When you’re looking at exposure to an unknown chemical for instance, the cells’ response may be different weeks or months compared to hours after exposure. This is a non-invasive way of assessing changes in their health and function over time."

Additionally, early research is being done to replicate the heart on a chip. Cardiac cells have already been shown to successfully "beat" in response to electrical stimulation, with the intent to simultaneously measure the electrophysiology and movement of the cells.

The next step, according to iCHIP principal investigator Elizabeth Wheeler, is integrating all the systems together to create a complete testing platform outside the human body to study some fundamental scientific questions.

"The ultimate goal is to fully represent the human body," Wheeler said. "Not only can the iCHIP provide human-relevant data for vaccine and countermeasure development, it also can provide valuable information for understanding disease mechanisms. The knowledge gained from these human-on-a-chip systems will someday be used for personalized medicine."

The Laboratory Directed Research and Development (LDRD) program is funding the iCHIP project.

Biosecurity gets a boost with ‘Human on a Chip’
LLNL Bioengineering
Animation: iCHIP
Inside the Lab: iCHIP